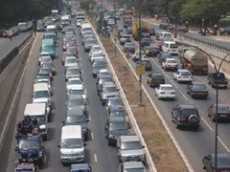 
Commuters who use the Tema-Accra Motorway have to brace themselves for some weeks of gridlock along the stretch, as officials race against time to complete the rehabilitation of the damaged La Klapa River Bridge, near the Accra Abattoir.

The rehabilitation works, which entered the second week yesterday, have seen officials of the Ghana Highway Authority (GHA) create a one-kilometre diversion on the Accra-bound stretch into the Tema-bound lane to allow for the removal of the damaged concrete slaps on the bridge.

The situation created heavy vehicular congestion which lasted the entire day yesterday, worsened during the rush hours, and a journey that ordinarily took between 20 and 30 minutes to make, taking at least over two hours.

With the situation affecting the Tema Beach Road, the other Tema-Accra route, drivers had to look for alternative ways to avoid the gridlock on the motorway.

Last week, the Daily Graphic reported that the Minister of Roads and Highways, Kwasi Amoako-Atta, had inspected the motorway and indicated that rehabilitation works would begin on it in August this year.

However, he said, the La Klapa River Bridge, also known as the Abattoir Bridge, would be replaced urgently because without rehabilitation it would collapse.

“The replacement is going to be a reinforcement concrete slab, which we expect to start on Friday, and the whole work will be completed in three weeks.

“Certain sections of the deck slab have developed defects and we need to replace them. The works are going to involve cutting them into sections and reconstructing them,” the Director of Bridges at the GHA, Yakubu Koray, had indicated.

When the Daily Graphic visited the site yesterday, it observed that work had begun in earnest, and with it came the anticipated traffic, as the area of work had been blocked.
Given how busy the motorway is, the one-kilometre diversion route created is not adequate, as the Daily Graphic observed a gridlock stretching a very long way.

The Project Engineer, Aaron Amponsah, said the scope of work involved the replacement of the under materials to re-enforce the bridge.

That, he said, was completed a week ago, paving the way for the removal of the top material, including a metal plate which was used at a portion of the bridge seven years ago when a similar rehabilitation was done on it.

“What we have started today is the main work, which involves the removal of the old concrete materials, as well cutting off the defective iron rods to be replaced with new ones, after which new concrete will be cast to form the bridge,” Mr Amponsah said.

The GHA, he said, had engaged the services of the Motor Traffic and Transport Department (MTTD) of the Police Service to help manage the traffic situation along the route, while officials worked two shifts in a 36-hour schedule to ensure the work would be completed by Monday, June 20, 2022.

On the construction of a Bailey bridge within the median to properly manage the traffic congestion, Mr Amponsah pointed out that although that option came up during the project management process, the storm drains along the stretch to host such bridges were short and so could not host any such metal bridges, which often come in a measurement of 5.2 metres.

“Bailey bridges come at standard measurements, and looking at the size of the bridges within the median, constructing one would require the bridge to be broken and extended to accommodate the size of the metal bridge,” he explained.

Some commuters who spoke with the Daily Graphic wondered why adequate traffic provisions had not been made and alternative routes provided to curtail the congestion, which they claimed would impact productivity.

“We are not saying the work should not be done; however, there should have been adequate public announcement, as well as ample warning at, say, the Accra Mall area to caution drivers, so that they could make alternative plans and not be caught in this gridlock.

“It is a Monday morning and we all know how bad the traffic situation is on Mondays and how important this route is for many businesses and productivity,” a caterer who was going to deliver food at an event lamented.

“Given the importance of this road, these repair works should be done during the night to spare everyone this stress. As it is, we are stuck and have to wait till we are able to move because there is nothing else we can do,” a driver said.

Others wondered why provision was not made to construct a Bailey (steel) bridge on the storm drains located in the median along the stretch as easy access to traffic for commuters.

As vehicular traffic became nearly stagnant on the motorway, some motorists appeared to have diverted their routes to the Accra-Tema Beach Road to escape the heavy traffic.

But that decision, as if made in unison, increased traffic along the route and its various by-passes, as vehicles had to contend with the added inconvenience of manoeuvring through the ongoing construction works on the Beach Road.

From the Tema end, the snail-pace traffic began well in Community 2, on the MPS road and on other routes and trickled into the common MPS Roundabout where the network converged onto the stretch towards the Nungua Barrier, often labelled T-Junction.

Chaos reigned at the barrier intersection where there was heavy traffic from all four sides, with no MTTD officials to direct the traffic, leading to a survival-of-the-fittest situation.

With the beach road also having its own construction works, that route was no better, the only relief being that the traffic on that route was manageable.

The other alternative route, the Spintex Road connecting from Sakumono, also had a fair share of the traffic, as commuters still looked for alternatives.