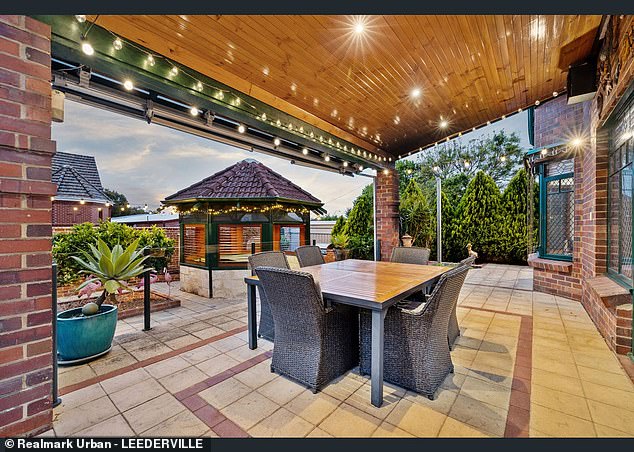 A real estate agency has been slammed after listing a property with a ‘minimum offer’ rather than a set price as rent bidding spirals out of control and desperate tenants fight for places.

The property, in Wembley, in Perth‘s east, has been listed on both realestate.com and Domain seeking ‘offers from $1200 per week’.

The Western Australian four-bedroom, three-bathroom property was purchased only last month for $1.75 million and was almost immediately relisted for rent.

Putting a property up for rent without a set price is often referred to as ‘rent bidding’ and encourages hopeful tenants to auction for the house.

As the rental crisis hits a tipping point one real estate agent has listed a property without a price and instead set a ‘minimum’ offer in a move called ‘rent bidding’, recently banned in NSW

The property in Wembley, Western Australia has been listed on sites realestate.com and Domain seeking ‘offers from $1200 per week’ (pictured)

The New South Wales government announced last month ‘rent bidding’ would be prohibited from December 17, with real estate agents ordered to advertise a property with a fixed rental price.

However, NSW renters are still allowed to offer more than the listed price under new laws as long as agents don’t invite bidding.

Victoria, Queensland and Tasmania have also attempted to stamp out the tactic, which sees agents invite tenants to enter somewhat of a bidding war in order to increase the rental price.

Realmark Urban in Leederville, which listed the property, has been contacted by Daily Mail Australia for comment.

The four-bedroom, three-bathroom property was purchased only last month for $1.75 million and was almost immediately relisted for rent

‘We have a housing shortage — the solution to getting a balanced market in this region is just more housing,’ he said.

‘The ones that are under construction at the moment, caught in the building bubble, we have to do whatever we can to get those through the system so we can get a more balanced market.’

Mr White did however say rental bidding was not supported by the institute and is ‘certainly not something we recommend’.

It comes after housing experts revealed Australia’s rental crisis was so dire official records show no comparable shortage of available tenancies since the Great Depression.

Sydney house prices are expected to rise by 8 to 12 per cent this year when interest rate rises are paused, with Melbourne tipped to see up to 6 per cent increases and Perth up to 13 per cent.

Chief executive officer of the Tenants’ Union of New South Wales, Leo Patterson Ross, said while the broader economic circumstances of 90 years ago were vastly different, the Great Depression reference was applicable as rental prices spiral.

‘We really have to go back and look at periods like the Great Depression to find comparable situations for renters in Australia at the moment,’ Mr Patterson Ross said.

‘Obviously we’re not in the Great Depression. But we we have to go back that far because we haven’t seen this kind of widespread general experience of the system going wrong.

‘We haven’t seen such low vacancy rates where people are very worried, very distressed about their chances of being housed in the coming weeks or months.’