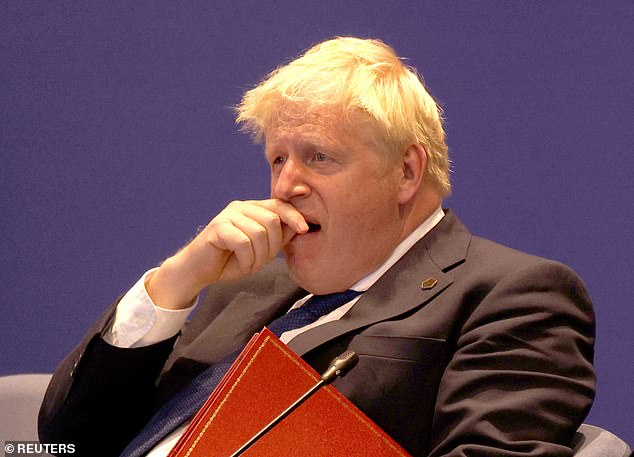 The PM trolled his critics in the wake of two by-election drubbings by making clear he wants to stay in Downing Street until the mid-2030s.

Mr Johnson said he was ‘thinking actively’ about fighting for a third term – which would almost certainly take him past Margaret Thatcher’s 11 years in power.

But the attacks kept coming today, with the resignation of party chair Oliver Dowden on Friday having sent the temperature soaring.

One of the candidates to succeed Mr Johnson told The Mail on Sunday that they expected the PM to face a challenge ‘within weeks or even days’ following the disastrous results in Wakefield and Tiverton & Honiton.

More no-confidence letters are also thought to have been sent to the backbench 1922 committee, even though Mr Johnson fended off a previous challenge earlier this month and should in theory be safe for a year,

Damian Green (left), who chairs the One Nation caucus of Tory MPs, warned the Government ‘needs to alter both its style and content’ and called on the Cabinet to step in. Keir Starmer (right) urged Mr Johnson to ‘bring it on’ over threats of an early general election

How could Boris be ousted by Tory MPs?

Haven’t we just had a Tory confidence vote?

Yes. After 15 per cent of Conservative MPs wrote to backbench 1922 Committee chair Sir Graham Brady, he triggered a vote earlier this month.

Mr Johnson and his allies hailed that as a clear victory and urged the party to unite behind him.

Many observers believed the rebels had triggered the ballot too early, and if they had waited for the results of these crunch by-elections the premier would have lost.

Can they just call another vote?

In theory, party rules mean that because Mr Johnson secured 50 per cent of the vote he cannot be challenged again for 12 months.

But notably Theresa May also won a confidence battle, and was later threatened with a rule change to enable her to face another vote – forcing her to resign.

The 1922 committee has made clear this time that changing the rules would be a last resort.

There are concerns that allowing repeated votes would merely result in perpetual crisis.

Is there any other way for the leader to be evicted?

Mr Johnson has defiantly insisted he will not entertain the ‘crazy’ idea of resigning.

And – barring the Opposition winning a vote of no confidence in the House – there is no formal mechanism to get rid of him before the next general election.

However, a withdrawal of support by the Cabinet would make his position untenable.

Tory chair Oliver Dowden’s decision to quit and refuse to back Mr Johnson inflicts a blow – but to become terminal it would take more big figures to walk out and openly call for Mr Johnson to go.

What happens if the leader is ousted?

The leader is sacked if they lose a Tory confidence vote, and a leadership contest begins in which they cannot stand. Resignation would also trigger a contest.

However, the outgoing chief typically stays on as Prime Minister until a replacement is chosen.

Are there any other big moments coming up that could fuel the revolt?

The cross-party Privileges Committee is about to kick off an inquiry into whether Mr Johnson misled the House over Partygate.

It is expected to report in the Autumn, when the PM will also have to run the gauntlet of Tory conference.

But perhaps the biggest looming threat to Mr Johnson is the cost-of-living crisis, with inflation forecast to soar over 11 per cent in October when energy bills rise again.

Damian Green, who chairs the One Nation caucus of Tory MPs, warned the Government ‘needs to alter both its style and content’ and called on the Cabinet to step in.

Former minister David Davis also lashed out at the PM’s claim the only argument of ‘substance’ for a change of direction he had heard from his critics was for the UK to return to the EU single market, arguing this is ‘plainly not true of me, or many others’.

Northern Ireland Secretary Brandon Lewis took to the airwaves this morning to dismiss the challenges to the PM.

He said Mr Johnson’s desire to look ‘long term’ when it comes to his leadership ‘has got to be a good thing’.

He told Sky’s Sophy Ridge On Sunday programme: ‘What I see there is somebody, and this is what I see when I work with the Prime Minister every day… somebody who has got that drive and enthusiasm for what we want to achieve for our country.

‘And I think seeing that kind of zest, and let’s be frank, somebody who is enjoying doing the job and wants and has got plans for the country that he wants to deliver, having that ability to look forward, I think is a good thing.

‘We get often get criticised in politics when we look short term, at just the next day, the next election, the next vote.

‘Actually we’ve got somebody as Prime Minister who wants to be looking long term at how we structurally improve our country for generations to come. That has got to be a good thing.’

Mr Johnson insisted the ‘endless churn’ of allegations was ‘driving people nuts’, as he pushed on with his Rwanda trip despite suggestions further ministerial resignations could follow.

He told reporters in Kigali that questions of his leadership were ‘settled’ after he won a vote of confidence earlier this month, and pledged he would not undergo any ‘psychological transformation’ in order to win over unsupportive MPs.

Asked if he would lead his party into the next election, he said: ‘Will I win? Yes.’

In a buoyant mood, the PM added: ‘At the moment I’m actively thinking about the third term and what could happen then, but I will review that when I get to it.’

The Prime Minister’s pledge to carry on into the next decade will infuriate those MPs scheming to remove him from office after he lost both Wakefield and Tiverton and Honiton to Labour and the Liberal Democrats respectively.

In reality, most Tory MPs are wondering whether he can remain in power until the Commons summer recess at the end of July.

One of the candidates considering a run for leader if Mr Johnson is toppled told this newspaper that a contest was likely to come soon. ‘We are talking weeks or even days, not months,’ the rival said. ‘Olive’s going has turned it.’

Mr Dowden resigned as Tory party co-chairman saying he was ‘distressed and disappointed by recent events’ and telling the Prime Minister that ‘someone must take responsibility’. He pointed voiced ongoing loyalty to the party – but not Mr Johnson personally.

A sighting of Mr Cameron and Mr Dowden, his former deputy chief of stafftogether has fuelled concerns in No 10 that a Cameroon clique is plotting against the PM.

The clique is thought to include former Chancellor George Osborne and allies of Mr Cameron’s successor in Downing Street, Theresa May.

However. he significance of the meeting has been played down by a source close to Mr Cameron, who describes it as one of regular ‘routine’ meetings between the pair.

‘He [Cameron] had absolutely no prior knowledge of, or involvement in, Oliver Dowden’s resignation,’ says the source.

One Cabinet Minister has told colleagues that the ‘tipping point’ for Mr Johnson would come if the Commons Privileges Committee concludes that the Prime Minister misled MPs when he told the Commons that no Covid rules had been breached in No 10.

‘That would be of a different order, no PM can survive that,’ the Minister – and potential successor – said.

The committee is expected to report by the autumn.

The £2,850-a-year club in London’s Mayfair is a favourite with politicians, Tory donors and royals, although the significance of the meeting is played down by a source close to Mr Cameron

Asked yesterday if he would like to serve a full second term, the PM said: ‘At the moment, I am thinking actively about the third and what could happen then. But I will review that when I get to it.’

He then clarified this would mean remaining in his job until the mid-2030s to enable him to complete his levelling-up agenda.

‘We’ve embarked on a massive project to change the constitution of the country, the way we run our legal system, the way we manage our borders, our economy,’ said Mr Johnson.

‘We also, at the same time, are embarked on a colossal project to unite and level up. And I happen to believe in that incredibly strongly.

‘It won’t be easily accomplished. And people will say it hasn’t worked, it’s not working yet, people in this constituency aren’t feeling the benefits. It’s going to take time. And I want to keep driving it forward.’

Sir Keir could also find himself being hit with a fine by Durham police for his ‘Beergate’ gathering in late April 2021 which he has said would lead to his resignation.

The Mail on Sunday has established through a Freedom of Information request that, contrary to earlier claims, the force does issue retrospective fines – and for smaller gatherings than the one attended by the Labour leader.