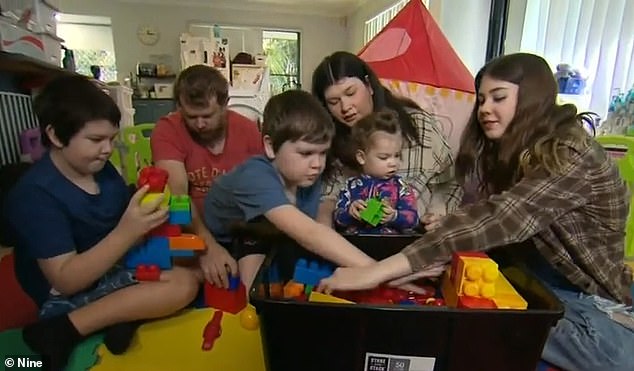 A desperate family of eight may be forced to sleep ‘in a few tents’ after suddenly being evicted from their home in a cramped Queensland rental market.

The Scott family said they have applied for 40 Sunshine Coast rental properties since they were given the 30-day notice to leave their home.

‘They have all been declined so far,’ mother Skye Scott told Nine News.

‘It basically comes down to having to get a few tents and having to sleep in them, that’s our only option.’

The Scotts only have until Monday to find a home or face living without a roof over their heads.

Ms Scott said the possibility is terrifying for her as several of her children have special needs.

Mother Sky Scott (right) said her family faces living ‘in a few tents’ and that homelessness would be especially difficult as several of her children have special needs, including her youngest daughter (left) who suffers from cerebral palsy

Her youngest daughter was only recently diagnosed with cerebral palsy which affects her ability to move.

‘I guess we’re just hanging on until that last second, that last minute, hoping that something comes through,’ Ms Scott said.

The Queensland government announced on Monday that it will 1200 new social and affordable homes as part of its record $2.9 billion four-year investment project.

Minister for housing Leanne Enoch said the project will create a total of 7,400 new homes to help tackle the housing crisis.

The Scott family (pictured, their six children) are facing homelessness due to the Queensland rental housing crisis

However, the Queensland Council of Social Service said more needs to be done now to aid the growing number of families facing the possibility of homelessness.

Data from the QCSS said over 50,300 people currently on the Queensland social housing register.

Gene discovery may explain why more women get Alzheimer’s disease