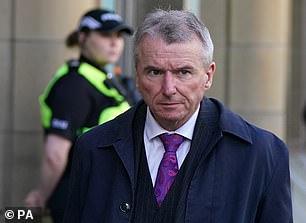 By Graham Grant and Krissy Storrar For The Daily Mail

A leading barrister is said to have sent a text message saying he would ‘sh*g’ the boss of Rape Crisis Scotland ‘just to have something over her’.

Brian McConnachie QC, a former High Court prosecutor in Scotland, has been found guilty of ‘unsatisfactory’ conduct after also allegedly making an obscene comment about a client.

Sanctions have yet to be decided but under the rules of the Faculty of Advocates he could face a fine of up to £3,000.

A disciplinary committee of the investigating body found there was insufficient evidence to prove more serious ‘professional’ misconduct.

Mr McConnachie, 63, is said to have made the ‘distasteful’ sexual comment about Sandy Brindley, chief executive of Rape Crisis Scotland, on October 27, 2020.

A spokesman for the charity said: ‘We are shocked and extremely disappointed to see such sexist and misogynistic behaviour directed towards our chief executive. For senior members of the faculty to discuss our staff in such a sexist and demeaning way is completely unacceptable.’

Complaints were first sent to the Scottish Legal Complaints Commission (SLCC), an independent body that handles disputes between the public and lawyers.

It decided there were grounds to refer six to the Faculty, The Daily Record reported.

It said this insulting conduct fell beneath the standard expected of ‘reputable advocates’.

A Faculty spokesman said: ‘As the process is ongoing, it would not be appropriate for [the] faculty to comment on this matter, beyond confirming it is correct to say that a finding of unsatisfactory professional conduct had been determined regarding Brian McConnachie QC.’

Mr McConnachie declined to comment yesterday, saying only ‘Cheerio’ when approached at his home near Burrelton, Perthshire.

Last night Scottish Tory deputy leader Meghan Gallacher said: ‘These vile comments would be totally unacceptable coming from anyone – that they came from a senior QC defies belief.’

And Lib Dem justice spokesman Liam McArthur said: ‘These are appallingly derogatory comments to come from a senior lawyer.’

Mr McConnachie has acted in some of Scotland’s most high-profile cases, including the defence of Aaron Campbell, who was 16 when he was convicted of abducting, raping and murdering six-year-old Alesha MacPhail in 2018 on the Isle of Bute.

On the Faculty’s website, Mr McConnachie is described as ‘one of Scotland’s busiest Queen’s Counsel’.

After a successful period as junior counsel he joined Crown Office as an Advocate Depute in 2002.

He remained there until 2009 and was the Principal Advocate Depute with practical responsibility for the prosecution of all High Court crime in Scotland.

Since returning to private practice he has been ‘regularly instructed in a wide variety of serious and regulatory crime’.