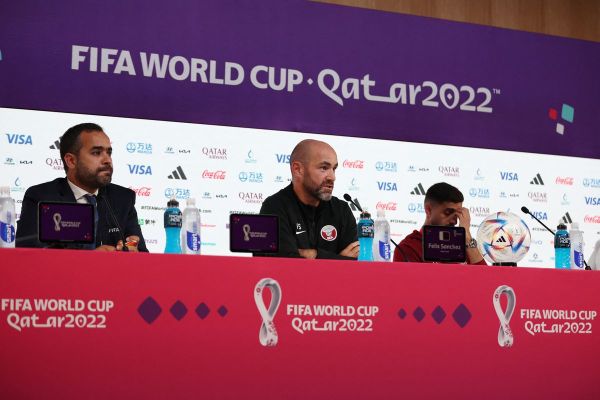 
Qatar’s players have long been preparing together for the hosts’ World Cup opener and coach Felix Sanchez said on Saturday that he hoped the “massive sacrifices” they had made to be tournament-ready would pay off.

Qatar paused its Stars League in September to allow the international players to train together and play several friendlies to prepare for the World Cup.

That involved the players, who all feature in Qatar’s domestic league, spending several weeks away from their families and Sanchez praised their commitment to improve as a squad together ahead of Sunday’s Group A game against Ecuador.

“Obviously everything we’ve done in the past three years is to have a very competitive team in the World Cup. Every country’s situation is different and we’re a small country,” Sanchez told reporters.

“All our players play in the local league, so we decided one of the ways to strengthen the national team was to… make massive sacrifices and spend long periods abroad.

“This shows the commitment of our players. All the time spent abroad training and competing is for tomorrow, Nov. 20, so we can start the competition well.”

Qatar skipper Hassan Al-Haydos, who has nearly 170 caps for the national team, said he was proud to lead the team that surprised the world when they won the Asian Cup in 2019.

“It’s a childhood dream,” he said. “We tried to qualify and we didn’t succeed in the past. But if we had played in the qualifiers, I believe we would have qualified.”

Qatar were once notorious for their impatient hire-and-fire policy for coaches but they have stuck with Sanchez for more than five years, trusting the Spaniard who worked with their youth teams when he arrived at their Aspire Academy in 2006.

The same players who played under him for youth teams now form the core of the senior team.

“After so many years, this is the end of a cycle — 16 years working in this country. I’ve been in a project, growing and following the steps of players in the national team,” Sanchez said.

“It’s a huge source of pride. I will try to enjoy the moment.”

But Sanchez knows that their group opponents Ecuador, Senegal and the Netherlands will be no pushovers and has tempered expectations ahead of Qatar’s World Cup debut.

“We know it’s three (group) games, we know the potential of our opponents. They are national teams that, due to their history and individual talent, they’re ahead of us,” he said.

“On paper they should get the three points, maybe they count on winning all three points. But we’re here to show that we can be a competitive team. We will bring our A game.”