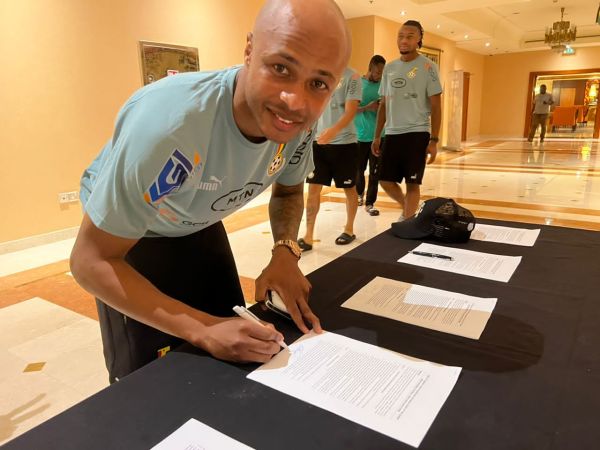 
Members of the Black Stars have committed to being of a high level of discipline and integrity at the FIFA World Cup “Qatar 2022” after signing a Code of Conduct ahead of the global showpiece.

The Code of Conduct was signed by the delegation on arrival at the team’s training camp in Abu Dhabi before they defeated Switzerland 2-0 in their final pre-World Cup friendly.

The 26-man squad of the Black Stars, the technical team, management and other members of the Ghanaian delegation who are currently in Qatar for the World Cup are “expected to be upright ethically, be respectful, honest, display a very high level of Integrity and uphold the good name of the Black Stars, Ghana Football Association and Ghana”.

Members of the team who were pictured signing the document included skipper Andre Ayew, Daniel Kofi Kyereh and Chris Hughton.

The Code of Conduct outlines the norms, rules, duties and responsibilities or proper practices of an individual in the team and the team’s collective behaviour.

“The GFA expects the players and all other members of the national team to abide by these principles during their stay in the national team especially while in Doha, Qatar for the FIFA World Cup which kicks off on Sunday, November 20, 2022,” the GFA said in a statement.

The Black Stars will play Portugal, South Korea and Uruguay in Group H.

There have been issues related to indiscipline at Ghana’s national team camps. Indiscipline within the Black Stars camp was in the global spotlight at the 2014 World Cup in Brazil.

In the aftermath of a player standoff over bonuses and an assault on a management team member by a player, the Justice Dzamefe Commission of Inquiry recommended that the GFA create one to govern team members’ behaviour.

I’m Not Anti-John Mahama, I’ve Worked With Him Since 2002 – Ofosu Ampofo | Politics