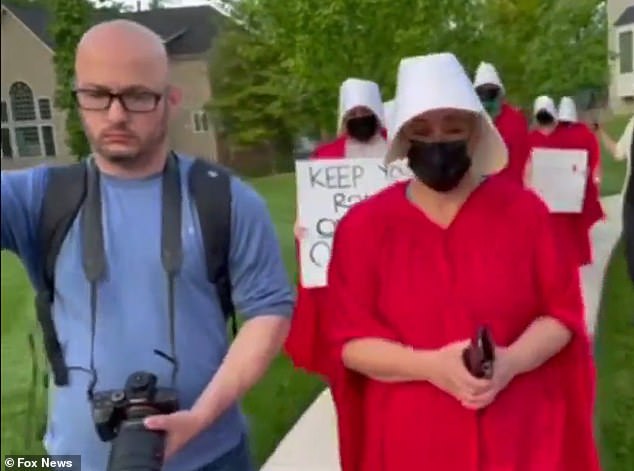 
A protester marching outside of Justice Amy Coney Barrett‘s house claimed the Supreme Court justice’s views on abortion may be influenced by her lack of experience with pregnancy and birthing.

Justice Barrett, 50, is a mother of five biological children, and two adopted children.

The comments from the protester come the day before the Supreme Court justices are due to gather on Thursday for their first scheduled meeting since the leak of a draft opinion that would overturn Roe v. Wade.

The photographer (left) she was speaking with clarified that Barrett is the biological mother of five children. ‘Not everybody wants to have, five kids,’ the protester said after a pause

The protester was one of seven who were marching outside of Barrett’s home in Falls Church, Virginia, clad in costumes referencing Margaret Atwood’s novel ‘The Handmaid’s Tale,’ in which women are forced to be impregnated and give birth against their will.

Speaking to a photographer, the woman claimed Barrett’s views on abortion could be influenced by the fact that she is an adoptive mother, and doesn’t know what it’s like to be pregnant.

‘It’s also possible that the fact that she’s an adoptive mother is influencing her inability to see what it’s like to carry a pregnancy to term,’ the protester said in footage obtained by Fox News Digital.

‘Well she’s had five kids by herself,’ the photographer responds.

Holding up her hands, the protester pauses before changing tact.

‘Not everybody wants to have five kids, or four kids, or one kid.’

Her handmaid bonnet flipped off her head shortly after, before she snatched it back into place.

Another protester, holding a sign that said ‘Keep your rosaries off my ovaries,’ said that she had no problem with religion, but that faith should not influence the law in America.

Justice Amy Coney Barrett is a famously devout catholic and conservative judge. She was appointed by former president Donald Trump

Barrett is the mother of five biological children and two adopted children. She is pictured above with four of them at the White House in September, 2020

‘We have no problem with Catholicism,’ she said, ‘However, in this country, there’s a separation of church and state. So somebody’s religion, no matter what that might be, cannot dictate how they carry out their job as a public official.’

The protesters marched in Barrett’s cul-de-sac for about 30 minutes before departing in their cars.

Protestors have descended on the homes of conservative Supreme Court justices since the leak of the draft to overturn Roe last week.

Protesters have gathered outside of the homes of conservative judges since the draft-decision to overturn Roe v. Wade was leaked last week

On Saturday dozens of demonstrators gathered in the rain in DC and marched towards the homes of conservative Justices John Roberts and Brett Kavanaugh.

Images of coat hangers were chalked on the street outside the justices’ homes, an apparent attempt to reinforce the pro-choice argument that overturning Roe v. Wade will not put an end to abortion, but instead will end safe abortions.

‘Keep abortion safe and legal,’ the pro-abortion protesters chanted while they stood in the streets holding candles and signs.

Others shouted: ‘Your life is a lie!’ and ‘We will not go back!’

Outside Roberts’ house they yelled ‘you don’t care if people die!’

Earlier this week, the Senate passed legislation to beef up security for Supreme Court justices.

The bipartisan bill, which passed by voice vote with no objections, aims to ensure justices and their families are protected as the court deliberates abortion access and whether to overturn the landmark Roe v. Wade decision.

The Supreme Court’s nine justices are due to gather in private for their first scheduled meeting since the leak of a draft opinion last week.

Roberts’ neighbors looked on as protesters marched to his Chevy Chase, Maryland, home

The meeting Thursday in the justices’ private, wood-paneled conference room, could be a tense affair in a setting noted for its decorum. No one aside from the justices attends.

Thursday’s conference comes at an especially fraught moment, with the future of abortion rights at stake and an investigation underway to try to find the source of the leak.

Chief Justice John Roberts last week confirmed the authenticity of the opinion, revealed by Politico, in ordering the court’s marshal to undertake an investigation.

Roberts stressed that the draft, written by Justice Samuel Alito and circulated in February, may not be the court’s final word. Supreme Court decisions are not final until they are formally issued, and outcomes in some cases have changed between the justices’ initial votes shortly after arguments and the official announcement of the decisions.

The bill was expected to fail but gave Democrats a chance to put on a public display of support for abortion rights – even Vice President Kamala Harris showed up to the Capitol to preside over the vote.

Rep. Madeleine Dean (D-PA), Rep. Nikema Williams (D-GA) and Rep. Veronica Escobar (D-TX) lead a march of Democratic women members of the U.S. House of Representatives through a tunnel in the U.S. Capitol to gather outside of the U.S. Senate chamber to protest and advocate for abortion rights

Even Vice President Kamala Harris, who would break a tie in the split Senate if the bill wasn’t subject to a filibuster, showed up to the Capitol to preside over the vote

A group of fired-up female members of the House Progressive Caucus marched toward the Senate side chanting ‘my body, my decision’ as the upper chamber voted on the House-passed bill.

The bill would have needed 60 votes, 10 from Republicans, to pass, but failed to garner even a simple majority as Sen. Joe Manchin, D-W.Va., voted against it, as did pro-choice Republican Sens. Lisa Murkowski, Alaska, and Susan Collins, Maine. Murkowski and Collins had submitted their own more narrow bill to codify abortion rights, the Reproductive Choice Act, but Schumer refused to put it up for a vote.