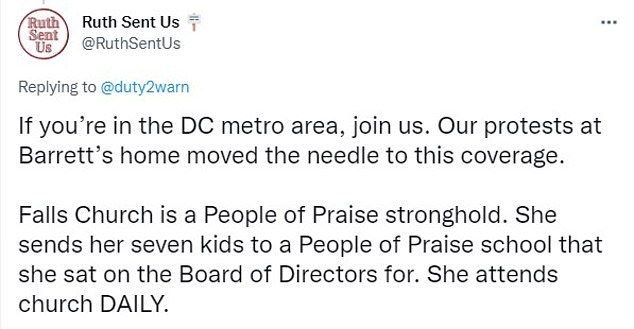 
Activist group Ruth Sent Us is advocating for protests outside the home, church and children’s school of Supreme Court Justice Amy Coney Barrett over her fierce opposition to abortion.

The pro-choice activists have been holding weekly protests outside the Virginia home of Barrett after the leaked Supreme Court draft opinion suggesting they may overturn Roe v Wade, paving the way for a national ban on abortion.

On Wednesday, Ruth Sent Us tweeted: ‘If you’re in the DC metro area, join us. Our protests at Barrett’s home moved the needle to this coverage.’

The group is named for the late pro-choice Supreme Court Judge Ruth Bader Ginsburg. They describe themselves on Twitter as: ‘Ruth Sent Us describes itself on their Twitter account as existing to ‘expose our corrupt and illegitimate supreme court.’

Barrett replaced Ginsburg on the Supreme Court after being nominated by then-President Donald Trump in 2020.

Hours after the tweet, a small group could be seen chanting outside of Barrett’s Virginia home

On June 8, the official Twitter account for Ruth Sent Us posted an infographic showing Justice Amy Coney Barrett and saying that the rallies will begin a Lemon Road Elementary School in Falls Church, Virginia, at 6:30 p.m

Ruth Sent Us continued in their tweet about protesting Barrett’s home saying: ‘Falls Church is a People of Praise stronghold. She sends her seven kids to a People of Praise school that she sat on the Board of Directors for. She attends church DAILY.’

Barrett has long been criticized for her association with People of Praise – which has been accused of being homophobic for its alleged stance on hiring LGBTQ teachers and barring admission to children of LGBTQ parents.

At the time of her nomination to the Supreme Court, Barrett was identified as having sat on board of schools affiliated with People of Praise and of sending her children to schools that were considered affiliated.

Several tweets from Ruth Sent Us made reference to Barrett’s association with the Christian group, People of Praise

In another tweet, Ruth Sent Us said that they would protest outside of Barrett’s cul-de-sac every Thursday, that message asked for people to join in and ‘help us fend off her hostile, racist neighbors.’

On June 9, a small group of protesters were seen outside of Barrett’s home. Some chanted: ‘You neighbor says post-Roe, we say hell no!’ and ‘Hey-hey, ho-ho, the handmaiden has got to go,’ reports Fox News.

Ruth Sent Us has also referred to Barrett as ‘Handmaid Barrett,’ a reference to the Hulu series ‘The Handmaid’s Tale,’ about a totalitarian regime that treats women as property of the state.

Barrett has a long history of opposing abortion rights. In 1998, Barrett co-authored an article where she said that abortion was ‘always immoral.’

Family photo of Amy Coney Barrett, husband Jesse Barrett, and their seven children is posted on Twitter on the day of her nomination by Mark Meadows, White House chief of staf

President Donald Trump announces Amy Coney Barrett, 48, as his nominee for Associate Justice of the Supreme Court of the United States during a ceremony in the Rose Garden at The White House in September 2020

In 2006, Barrett signed on to an ad opposing ‘abortion on demand’ that was part of a two-page spread in the South Bend Tribune on the anniversary of Roe v Wade’s ruling.

The ad’s wording reference life beginning at ‘fertilization’ and referred to Roe v Wade as having a ‘barbaric legacy.’

While a professor at Notre Dame in 2016, Barrett signed her name to a letter that condemned  the school’s decision to award Joe Biden a medal for his service due to his support for Roe v Wade, reports the New Yorker.

However, when asked about her feelings on Roe v Wade during her Senate confirmation hearing in 2020, Barrett was more coy when asked if she felt the decision was a mistake saying in part: ‘If I express a view on a precedent one way or another, whether I say I love it or I hate it, it signals to litigants that I might tilt one way or another in a pending case.’

According to NPR, Barrett gave a similar answer during a confirmation hearing for the 7th U.S. Circuit Court of Appeals in 2017 saying: ‘All nominees are united in their belief that what they think about a precedent should not bear on how they decide cases.’

During the 2016 presidential election campaign, Donald Trump said that he would only appoint Supreme Court judges who would vote to overturn Roe v Wade.

In May, a Department of Homeland Security report suggested that the leaking of the draft opinion, first in a Politico report, has led to a ruse in extremist activities on both sides of the debate, according to Axios.

Within two weeks of the leak, the the National Capital Region Threat Intelligence Consortium identified 25 seemingly creditable threats against justices that were referred to law enforcement.

The memo read in part: ‘Some of these threats discussed burning down or storming the U.S. Supreme Court and murdering Justices and their clerks, members of Congress, and lawful demonstrators.’

Ruth Sent Us made reference to Roske’s arrest on Twitter

Kavanaugh and his wife are the parents of two young daughters. They all reside in the home that was apparently targeted by the suspect

Meanwhile, another Supreme Justice was targeted this week over his political opinions.

According to the criminal complaint, Roske told investigators that he was ‘upset’ about the leaked Supreme Court draft as well as the Robb Elementary School massacre in Uvalde. Roske said that he felt Kavanaugh ‘would side with Second Amendment decisions that would loosen gun control laws.’

Since the leaking of the Supreme Court draft opinion, Ruth Sent Us at one time or another has posted all of the address of all six conservative justices.

Ruth Sent Us tweeted about Roske’s arrest saying: ‘Armed man called the police on himself. He didn’t even go to Kavanaugh’s street. No matter how much you wish it, it just wasn’t a serious assassination attempt, so it’s not getting media attention.’