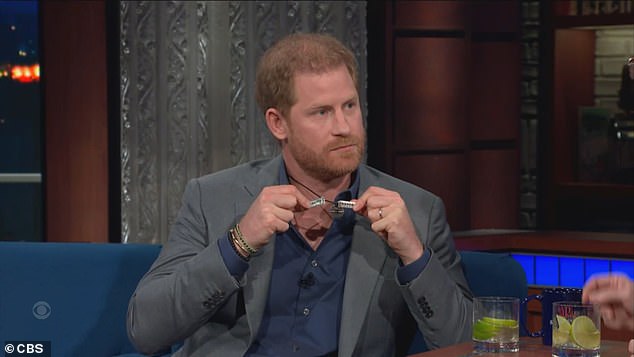 
Prince Harry has confirmed he still wears the necklace he accused his brother of breaking in 2019 – showing off the ‘now fixed’ jewelry in a television interview.

Harry, 38, was asked by The Late Show host Stephen Colbert, in an interview that aired on Tuesday, which necklace Prince William ripped off him.

Harry said it was the one he was wearing at that moment, and pointed out the symbolism of each of the three objects attached to the leather strap.

‘There is a lot of talk about the physical fight that the two of you had, where he pushed you down in the kitchen and broke the dog bowl, when you fell on it,’ Colbert began.

‘It says it broke your necklace. What necklace was it that he broke?’

Harry replied: ‘This one. Which is now fixed.’

The leather string features a silver pendant tied onto the end

Harry and his older brother in July 2021. Harry has written of feeling distant from William and said he was angry the press blamed their estrangement on Meghan

Colbert asked him to describe the three pendants.

‘It’s got my kids’ heartbeats, which my wife gave me,’ said Harry, showing off silver plaques with the cardiograms of his children engraved.

‘And then a friend of mine in Botswana made this for me, which has got tiger’s eye in the middle.’

Tiger’s eye is said to bring power, inner strength, healing and courage. Some cultures believe it wards off the evil eye.

It is an inexpensive stone, mainly found in South Africa, but with deposits also found in Namibia, Australia, India, and Thailand.

Harry has been seen wearing the necklace for many years, giving rise to speculation it was a gift from his ex-girlfriend Chelsy Davy, who he dated from 2004-10.

Chelsy Davy, pictured with Harry in 2007, is believed to have given him the leather pendant when they started dating

Harry, in his memoir Spare, writes about the bruising encounter with his furious brother in 2019.

‘[William] grabbed me by the collar, ripping my necklace, and he knocked me to the floor,’ he writes.

The furious row allegedly broke out at his London home, Nottingham Cottage, in the grounds of Kensington Palace.

William is said to have branded Meghan ‘difficult’, ‘rude’ and ‘abrasive’ and insisted he was trying to ‘help’ his younger brother, during a meeting about ‘the whole rolling catastrophe’.

Harry speaks to The Late Show host Stephen Colbert, who asked about the necklace

Harry accused his brother of ‘parroting the press narrative’ about his wife, before a screaming match ensued, the book claims.

Harry claims that William then urged him to fight back, saying that is what would happen when they scrapped as children.

But the Duke of Sussex says he refused, claiming that William left and then returned ‘looking regretful, and apologized’.

William then ‘turned and called back: “You don’t need to tell Meg about this”.’

Harry claims he said: ‘You mean that you attacked me?’, to which William replied: ‘I didn’t attack you, Harold.’

The Duke of Sussex says that the first person he spoke to about it was his therapist on the phone.

But he claims Meghan later saw the ‘scrapes and bruises’ on his back from the dog bowl.

He claims his wife ‘wasn’t that surprised, and wasn’t all that angry. She was terribly sad’.

Share. Facebook Twitter Pinterest LinkedIn Tumblr Email
Previous ArticleAfrofuturist artist creates photos of mysterious ‘Humaliens’
Next Article “What did I do to deserve this?” – Lady cries out after her mother’s househelp tried to disfigure her face (video)