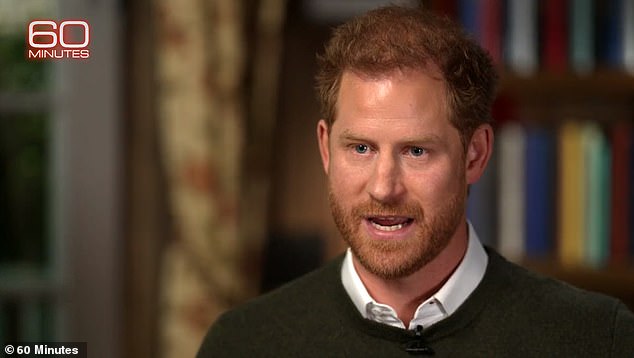 
Prince Harry today launched another extraordinary attack on King Charles’ wife Camilla, branding her ‘dangerous’ and a ‘villain’, as he continued his publicity book for his explosive memoir Spare.

The 38-year-old Duke of Sussex to aim at the Queen Consort while speaking with CBS News’ 60 Minutes host Anderson Cooper, who questioned Harry about several very damaging allegations he made about Camilla in the book’s pages.

Referring back to a 1995 interview in which his mother, Princess Diana, famously referred to Camilla as the ‘third person in her marriage’, Harry says that this admission turned the now-Queen Consort into a ‘villain’, adding: ‘She needed to rehabilitate her image.’

According to Harry – who also reveals in his book that he and William ‘begged’ their father not to marry Camilla – this desire to transform her public image made her ‘dangerous’.

He accuses his step-mother of ‘trading information’ with the press in an attempt to get more positive stories written about herself, before sensationally suggesting that her ‘connections’ with the media would end up with ‘people or bodies left in the street’.

While speaking to CBS News’ 60 Minutes, Harry, 38, branded his stepmother ‘dangerous’ and called her a ‘villain’

‘[Her need to rehabilitate her image] made her dangerous because of the connections that she that she was forging within the British press,’ he told Cooper, according to an official transcript of the interview – which DailyMail.com received before the interview began airing.

‘And there was open willingness on both sides to trade of information. And with a family built on hierarchy, and with her, on the way to being Queen Consort, there was gonna be people or bodies left in the street because of that.’

Princess Diana’s interview with the BBC’s Martin Bashir in 1995 marked the first time that she had publicly addressed claims that Charles and Camilla had an affair during her marriage to the then-Prince of Wales.

At the time, she sensationally told Bashir: ‘There were three of us in this marriage, so it was a bit crowded.’

As the Duke once again blasts his closest family members in the 60 Minutes – just over one hour after his sit-down with British TV host Tom Bradby finished airing – interview, DailyMail.com can reveal he also:

His latest attack on Camilla comes after he revealed in his book, Spare, that he and William ‘begged’ Charles not to marry her

Harry also claims that what he saw as Camilla’s desire to ‘be on the front page [and] have positive stories written about [her]’ came from his family’s belief that positive media coverage would ‘improve your reputation or increase the chances of you being accepted as monarch by the British public’.

‘If you are led to believe, as a member of the family, that being on the front page, having positive headlines, positive stories written about you, is going to improve your reputation or increase the chances of you being accepted as monarch by the British public, then that’s what you’re gonna do,’ he adds.

The Duke’s sensational public attack on Camilla is the latest in a line of barbs that he has flung at his stepmother – having already painted what Cooper describes as a very ‘unflattering portrayal’ of her in his explosive memoir Spare, which was accidentally released in Spain last week.

In the book, Harry makes similar accusations against Camilla in regard to her so-called ‘connections’ with the press, accusing her of leaking information to the media as part of a ‘campaign’ to take the Crown.

In an extraordinary passage in his autobiography, the Duke of Sussex writes: ‘Shortly after our private meetings with her, she began to develop her long-term strategy, a campaign directed at marriage and with time, the Crown (with the blessing of our father, we supposed).

‘News stories started appearing in all the newspapers about her conversations with Willy, stories which recounted lots of small details, none of which came from my brother, of course.’

The Duke also claims that he and his brother William ‘begged’ the then-Prince of Wales not to remarry after Princess Diana’s death, fearing that she would be their ‘wicked stepmother’.

During his 60 Minutes interview, Harry said that both he and William didn’t think it was ‘necessary’ for Charles to wed Camilla, telling Cooper: ‘We didn’t think it was necessary. We thought that it was gonna cause more harm than good and that if he was now with his person, that– surely that’s enough. Why go that far when you don’t necessarily need to?

Charles had tried to win over his sons before asking the public to accept Camilla, the book claims. Harry then astonishingly says that meeting the future Queen Consort for the first time was like an ‘injection’. He later says that ultimately he and William approved of Camilla.