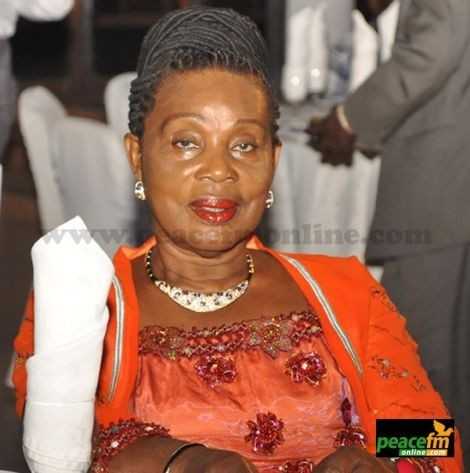 The Ghana movie industry was on Tuesday, August 2, 2022, hit with the sad news of the passing of veteran actor Prince Yawson, popularly known as, Waakye.

He is said to have kicked the bucket between the hours of 1:00 pm and 2:00 pm that fateful afternoon after being rushed to the 37 Military Hospital the previous night.

Speaking at the one-week observation of Waakye, popular actress, Grace Omaboe known within the entertainment industry as Maame Donkor publicly refused to quit talking about the failures of Ghana’s health system which, she believes, contributed significantly to the death of the actor after an unknown face was seen whispering into her ears to not talk about it.

She angrily blurted out, “Why…why…why? I would talk, I would talk about it. How can a sick person be in a taxi for four hours? Why don’t you want me to talk about it? Inquire from the 37 Military hospital, and anyone who thinks I am telling lies, should come and arrest and kill me.”

In a viral video sighted y GhanaWeb, Maame Dokono continued to narrate the sequence of events that happened to Prince Yawson in his final hours on earth.

“He was first taken to Korle-Bu, but there was no bed there to accommodate him, so they sent him to Ridge, and there was no bed available, he had to be taken to the 37 Military Hospital and they also had no bed for him.”

She added that “It took the intervention of some cast of Obra to plead with some patients already admitted to give out their bed before he was attended to. Meanwhile, he has been in a taxi for over four hours.”

Maame Dokono again revealed that, Waakye sustained cuts on his forehead after he allegedly fell from his bed while sleeping at night.

The veteran actress believes the unfortunate situation was a result of the refusal of the management of 37 Military Hospital to allow the widow of the actor to stay with him overnight.