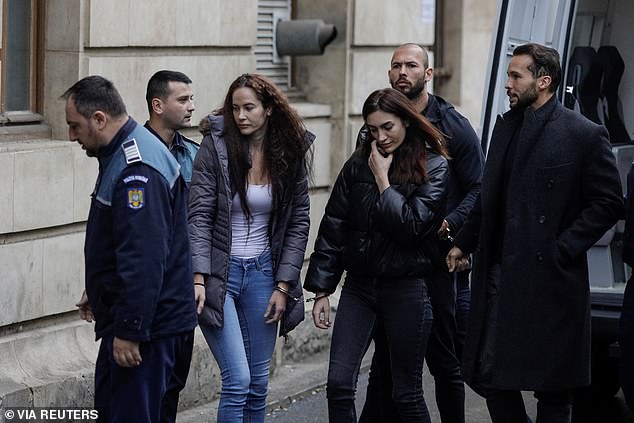 In a series of swoops across Bucharest and elsewhere in Romania, police seized paperwork and computer equipment from various properties said to be connected to Tate and his brother Tristan.

It comes as media in the country reported that the British consul had visited the brothers in the prison where they are being held following their arrest last month.

They were held as part of a huge investigation into claims that several women had been trafficked and raped by Luton born Tate and his brother as part of an organised criminal empire.

A statement issued by the Directorate for the Investigation of Organized Crime and Terrorism said:’ This morning, the prosecutors of DIICOT – Central Structure, in the continuation of the investigations in the case regarding the commission of the crimes of constituting an organized criminal group, human trafficking and rape, implement seven home search warrants, within the radius of Bucharest municipality and Ilfov counties and Prahova.

‘Judicial activities are carried out together with police officers from BCCO Bucharest and SCCO Ilfov.

‘We make it clear that during the entire criminal process, the investigated persons benefit from the procedural rights and guarantees provided by the Code of Criminal Procedure, as well as the presumption of innocence.’

One of the homes searched was that of Romania kick-boxer and cage fighter Vlad Obu with paperwork and computers seized and taken away.

Meanwhile MailOnline can also reveal that one of two women dubbed Tate’s Angels and who were arrested at the same time is being given compassionate leave from custody.

Former police officer Luana Radu, 32, has been given three-hour licence so she can attend the funeral of her grandmother in Bucharest later on Thursday.

She quit the force eight years ago to focus on sex video chat room work with Georgiana Naghel, 28, and investigators say both had a role to “coerce” and “control” other women involved in the business.

Tate, 36, a British-U.S. citizen who has 4.5 million followers on Twitter, was detained on December 29. in Bucharest along with his brother Tristan and two Romanian women.

Georgiana Naghel (left), 28, is described as a businesswoman and influencer who is believed to have been dating Tate for almost a year before her arrest. Luana Radu (right), 32, has been given three-hour licence so she can attend the funeral of her grandmother in Bucharest later on Thursday

On Tuesday, a court upheld a judge’s December 30 move to extend their arrest from 24 hours to 30 days.

In a separate hearing Wednesday at the Bucharest Tribunal, Tate lost an appeal that challenged assets seized by prosecutors, including properties and a fleet of luxury cars, said Ramona Bolla, a spokesperson for Romanian anti-organized crime agency DIICOT.

The court ‘decided that the seizures are legal and (that) the goods remain at our disposal,’ she told The Associated Press.

Prosecutors investigating the case have so far seized 15 luxury cars – 11 in December raids and four last week – at least seven of which are owned by the Tate brothers, and more than 10 properties and land owned by companies registered to them.

Prosecutors investigating the case have seized 15 luxury cars, at least seven of which were owned by the Tate brothers

Bolla said is not clear whether any assets seized since December were included in Wednesday’s appeal.

If prosecutors can prove the Tates gained money through human trafficking, Bolla said that the assets could be used to cover the expenses of the investigation and compensation for victims.

Before the court ruling Wednesday Constantin Gliga, one of the lawyers representing Tate, told the media that the asset seizures are disproportional to the charges.

DIICOT said it has identified six victims in the human trafficking case who were subjected to ‘acts of physical violence and mental coercion’ and were sexually exploited by the members of the alleged crime group.

The agency said victims were lured by pretenses of love, and later intimidated, kept under surveillance and subjected to other control tactics while being coerced into performing in pornography that was intended to make money for their alleged persecutors.

Tate, a former professional kickboxer who has reportedly lived in Romania since 2017, was previously banned from various prominent social media platforms for expressing misogynistic views and hate speech.