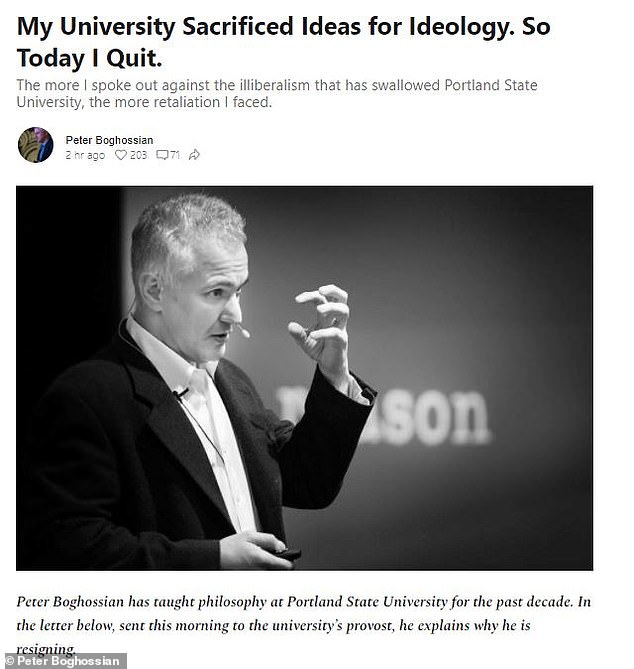 
Peter Boghossian has taught philosophy at Portland State University for the past decade. In the letter below, sent this morning to the university’s provost, he explains why he is resigning.

​​I’m writing to you today to resign as assistant professor of philosophy at Portland State University.

Over the last decade, it has been my privilege to teach at the university. My specialties are critical thinking, ethics and the Socratic method, and I teach classes like Science and Pseudoscience and The Philosophy of Education. But in addition to exploring classic philosophers and traditional texts, I’ve invited a wide range of guest lecturers to address my classes, from Flat-Earthers to Christian apologists to global climate skeptics to Occupy Wall Street advocates. I’m proud of my work.

I invited those speakers not because I agreed with their worldviews, but primarily because I didn’t. From those messy and difficult conversations, I’ve seen the best of what our students can achieve: questioning beliefs while respecting believers; staying even-tempered in challenging circumstances; and even changing their minds.

Peter Boghossian has taught philosophy at Portland State University for the past decade. In the letter below, sent this morning to the university’s provost, he explains why he is resigning

I never once believed — nor do I now — that the purpose of instruction was to lead my students to a particular conclusion. Rather, I sought to create the conditions for rigorous thought; to help them gain the tools to hunt and furrow for their own conclusions. This is why I became a teacher and why I love teaching.

But brick by brick, the university has made this kind of intellectual exploration impossible. It has transformed a bastion of free inquiry into a Social Justice factory whose only inputs were race, gender, and victimhood and whose only outputs were grievance and division.

Students at Portland State are not being taught to think. Rather, they are being trained to mimic the moral certainty of ideologues. Faculty and administrators have abdicated the university’s truth-seeking mission and instead drive intolerance of divergent beliefs and opinions. This has created a culture of offense where students are now afraid to speak openly and honestly.

I noticed signs of the illiberalism that has now fully swallowed the academy quite early during my time at Portland State. I witnessed students refusing to engage with different points of view. Questions from faculty at diversity trainings that challenged approved narratives were instantly dismissed. Those who asked for evidence to justify new institutional policies were accused of microaggressions. And professors were accused of bigotry for assigning canonical texts written by philosophers who happened to have been European and male.

At first, I didn’t realize how systemic this was and I believed I could question this new culture. So I began asking questions. What is the evidence that trigger warnings and safe spaces contribute to student learning? Why should racial consciousness be the lens through which we view our role as educators? How did we decide that “cultural appropriation” is immoral?

Unlike my colleagues, I asked these questions out loud and in public.

Boghossian writes that ‘students at Portland State are not being taught to think. Rather, they are being trained to mimic the moral certainty of ideologues’

I decided to study the new values that were engulfing Portland State and so many other educational institutions — values that sound wonderful, like diversity, equity, and inclusion, but might actually be just the opposite. The more I read the primary source material produced by critical theorists, the more I suspected that their conclusions reflected the postulates of an ideology, not insights based on evidence.

I began networking with student groups who had similar concerns and brought in speakers to explore these subjects from a critical perspective. And it became increasingly clear to me that the incidents of illiberalism I had witnessed over the years were not just isolated events, but part of an institution-wide problem.

The more I spoke out about these issues, the more retaliation I faced.

Early in the 2016-17 academic year, a former student complained about me and the university initiated a Title IX investigation. (Title IX investigations are a part of federal law designed to protect “people from discrimination based on sex in education programs or activities that receive federal financial assistance.”) My accuser, a white male, made a slew of baseless accusations against me, which university confidentiality rules unfortunately prohibit me from discussing further. What I can share is that students of mine who were interviewed during the process told me the Title IX investigator asked them if they knew anything about me beating my wife and children. This horrifying accusation soon became a widespread rumor.

With Title IX investigations there is no due process, so I didn’t have access to the particular accusations, the ability to confront my accuser, and I had no opportunity to defend myself. Finally, the results of the investigation were revealed in December 2017. Here are the last two sentences of the report: “Global Diversity & Inclusion finds there is insufficient evidence that Boghossian violated PSU’s Prohibited Discrimination & Harassment policy. GDI recommends Boghossian receive coaching.”

The 55-year-old explained he was stepping down because the university had made ‘intellectual exploration impossible’ and its only ‘inputs were race, gender, and victimhood and whose only outputs were grievance and division’

Not only was there no apology for the false accusations, but the investigator also told me that in the future I was not allowed to render my opinion about “protected classes” or teach in such a way that my opinion about protected classes could be known — a bizarre conclusion to absurd charges. Universities can enforce ideological conformity just through the threat of these investigations.

I eventually became convinced that corrupted bodies of scholarship were responsible for justifying radical departures from the traditional role of liberal arts schools and basic civility on campus. There was an urgent need to demonstrate that morally fashionable papers — no matter how absurd — could be published. I believed then that if I exposed the theoretical flaws of this body of literature, I could help the university community avoid building edifices on such shaky ground.

So, in 2017, I co-published an intentionally garbled peer-reviewed paper that took aim at the new orthodoxy. Its title: “The Conceptual Penis as a Social Construct.” This example of pseudo-scholarship, which was published in Cogent Social Sciences, argued that penises were products of the human mind and responsible for climate change. Immediately thereafter, I revealed the article as a hoax designed to shed light on the flaws of the peer-review and academic publishing systems.

Shortly thereafter, swastikas in the bathroom with my name under them began appearing in two bathrooms near the philosophy department. They also occasionally showed up on my office door, in one instance accompanied by bags of feces. Our university remained silent. When it acted, it was against me, not the perpetrators.

I continued to believe, perhaps naively, that if I exposed the flawed thinking on which Portland State’s new values were based, I could shake the university from its madness. In 2018 I co-published a series of absurd or morally repugnant peer-reviewed articles in journals that focused on issues of race and gender. In one of them we argued that there was an epidemic of dog rape at dog parks and proposed that we leash men the way we leash dogs. Our purpose was to show that certain kinds of “scholarship” are based not on finding truth but on advancing social grievances. This worldview is not scientific, and it is not rigorous.

Administrators and faculty were so angered by the papers that they published an anonymous piece in the student paper and Portland State filed formal charges against me. Their accusation? “Research misconduct” based on the absurd premise that the journal editors who accepted our intentionally deranged articles were “human subjects.” I was found guilty of not receiving approval to experiment on human subjects.

Meanwhile, ideological intolerance continued to grow at Portland State. In March 2018, a tenured professor disrupted a public discussion I was holding with author Christina Hoff Sommers and evolutionary biologists Bret Weinstein and Heather Heying. In June 2018, someone triggered the fire alarm during my conversation with popular cultural critic Carl Benjamin. In October 2018, an activist pulled out the speaker wires to interrupt a panel with former Google engineer James Damore. The university did nothing to stop or address this behavior. No one was punished or disciplined.

For me, the years that followed were marked by continued harassment. I’d find flyers around campus of me with a Pinocchio nose. I was spit on and threatened by passersby while walking to class. I was informed by students that my colleagues were telling them to avoid my classes. And, of course, I was subjected to more investigation.

I wish I could say that what I am describing hasn’t taken a personal toll. But it has taken exactly the toll it was intended to: an increasingly intolerable working life and without the protection of tenure.

This isn’t about me. This is about the kind of institutions we want and the values we choose. Every idea that has advanced human freedom has always, and without fail, been initially condemned. As individuals, we often seem incapable of remembering this lesson, but that is exactly what our institutions are for: to remind us that the freedom to question is our fundamental right. Educational institutions should remind us that that right is also our duty.

Portland State University has failed in fulfilling this duty. In doing so it has failed not only its students but the public that supports it. While I am grateful for the opportunity to have taught at Portland State for over a decade, it has become clear to me that this institution is no place for people who intend to think freely and explore ideas.

This is not the outcome I wanted. But I feel morally obligated to make this choice. For ten years, I have taught my students the importance of living by your principles. One of mine is to defend our system of liberal education from those who seek to destroy it. Who would I be if I didn’t?