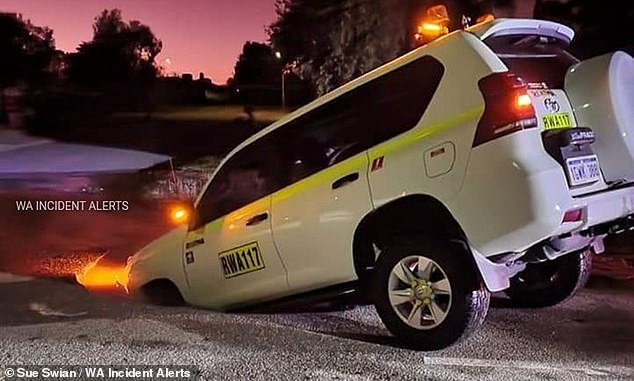 A four-wheel drive plunged into a three-metre wide sinkhole that opened underneath a major intersection in Perth‘s north.

The Toyota LandCrusier, believed to be a hire car, was stuck nose deep in the water-filled hole in Beechboro but has been pulled out and taken away.

The ground collapsed from the adjacent footpath all the way across the intersection of Brockmill Avenue and Barlee Way.

Work crews are trying to drain the hole and police are diverting traffic with motorists advised to drive cautiously.

The force of the deluge swept away fences and part of the footpath.

Drinking water has now been cut off to 60 local residents.

Police were called to the scene to manage the chaos.

It is the second time in space of a month the water mains on Centro Avenue has burst and last time it claimed a luxury car as a victim.

A Mercedes-Benz was completely submerged in a watery sinkhole that opened after the water mains burst in the suburb of Subiaco.

The owner, who was a university student studying with some friends, watched on helplessly.

As a precautionary measure an adjacent block of units was evacuated.

In March a burst water main led to another massive sinkhole causing chaos in the Perth’s northern suburb of Wangara.

The hole brought down a street light and kept crews busy trying to repair it for 12 hours.

Share. Facebook Twitter Pinterest LinkedIn Tumblr Email
Previous ArticleGujarat bridge: What we know about India’s deadly bridge collapse
Next Article “Don’t rush into marriage” — Stella Damasus warns as she recounts how she was served ‘breakfast’ by her ‘soulmate’