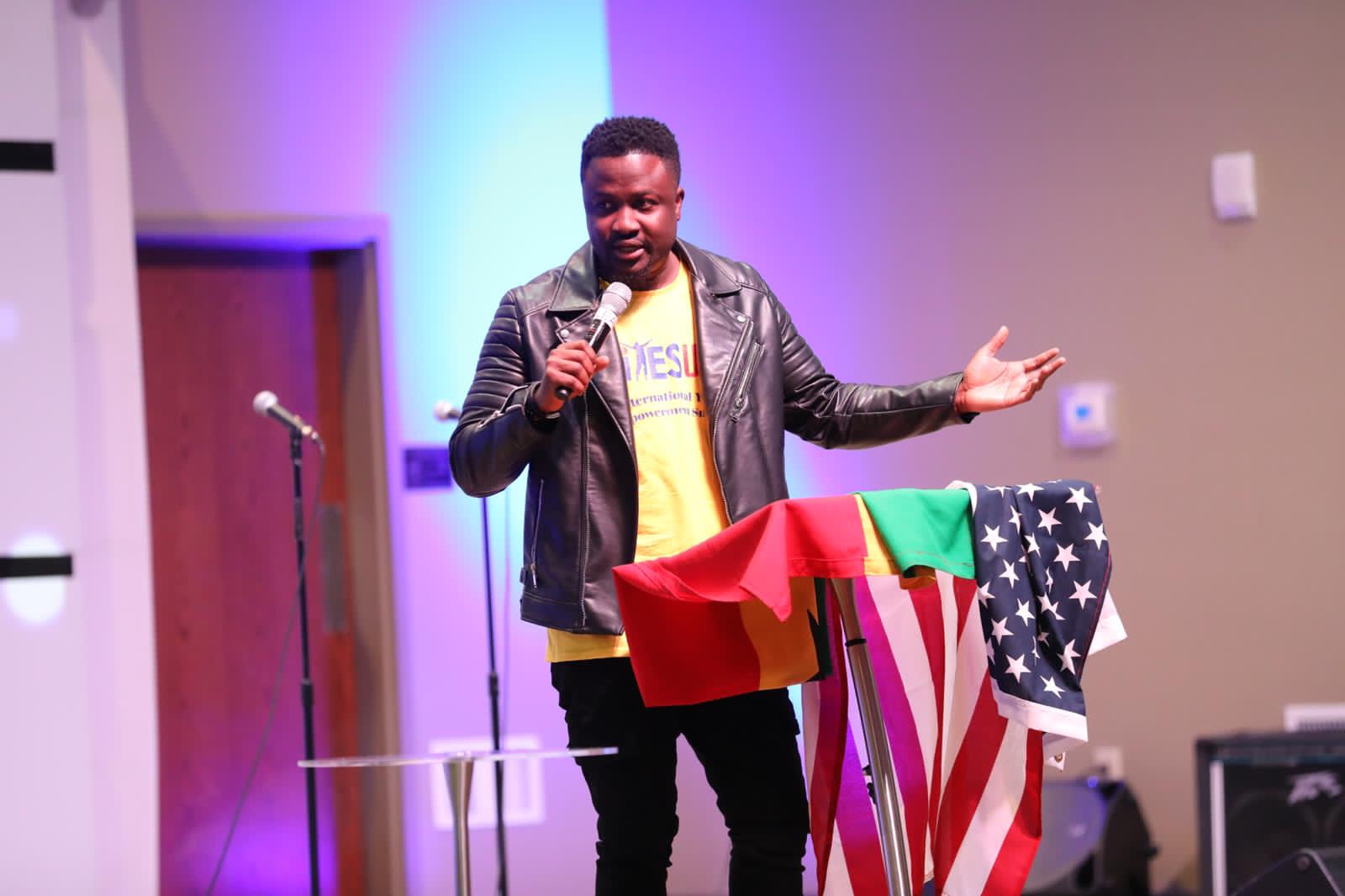 
The four-time recipient of the Youth event of the year award; iYES, has outstretched its tentacles beyond the borders of Ghana. The celebrated youth event hosted by Pastor Brian Amoateng debuted its one-day program in Columbus, Ohio on 11th June,2022 at the magnificent auditorium of the Jesus Power Assembly of God Church.

The event hosted seasoned and internationally recognized speakers including the likes of Dr. Frank Ofosu Appiah, Apostle Bismark Osei Akomeah, Mr & Mrs. Agyekum, Jackie Appiah, and Dr. Sonnie Badu. The day’s event was streamed on all the iYES social media platforms which enabled thousands to join from across the globe.

The morning session saw many young people from different parts of the United States of America such as Texas, Arizona, Tennessee, New York, and some even came from as far as Europe to fill up the auditorium. Typical of iYES, the event started with fiery intercessory prayers and intense praises and worship led by Minister Francis Amoo.

Pastor Brian with the flags of the United States of America and Ghana strung around his neck gracefully opened the session by sharing key nuggets on success and the keys to fulfilling one’s assignment.

One resonating phrase amongst the many he shared was that ‘the day you identify your assignment is the day you start living.’ Right after Pastor Brian’s opening came the sensational Campus Rush Music and indeed their ministration caused a stirring rush in the entire auditorium.

READ ALSO: VIDEO: I Was Poisoned And Sent To A “Juju” Man Just To K!ll Me – Guru Makes Shocking Revelation

The next speaker to grace the iYES USA podium was Mrs. Delali Agyekum, a renowned entrepreneur and C.E.O of The New Millenial Home Health and Akidel company who shared on a vivid yet brief account of her childhood and how she got to be who she is today. She further highlighted the importance of being God-fearing.

Then came Minister Robert also known as the Dancing Prophet who shared an inspiring testimony about how he encountered God through Pastor Brian at a youth conference and how that caused a transformation in his life before ministering to the audience in dance which was met with a thundering applause from the audience. The last speaker for the morning session was in the person of Apostle Bismark Akomeah, the Senior Pastor of Jesus Power Assemblies of God.

The foundational scripture of his message was Isaiah 60:1-4 whiles admonishing the audience to awaken the giants in their inner beings. The morning session couldn’t have closed on a more uplifting note.

The evening session kicked off at about 5:30pm with another bout of intense prayers and praises and worship once again led by Minister Francis Amoo. The entire auditorium was filled to its capacity with the masses clad in their branded iYES t-shirts. Among the distinguished guests was the Chief of the Ashanti Kingdom in Columbus, Nana Obiri Yeboah. Pastor Brian led the audience in a time of prayer against sudden deaths, illnesses, and delayed results. He then led the audience in reciting the prayer unto salvation. The honorable Mayor of Columbus, Andrew Ginther who coincidentally had to speak at an equally important summit sent a representative in his stead to present a certificate of recognition to Pastor Brian and the iYES team on behalf of the people of Columbus for the tremendous impact on the youth.

Jackie Appiah, one of the celebrated iYES Ambassadors joined the session in a heartwarming video because of her inability to be at the event in-person. The highlights of her message were the importance of humility and patience.

Next came, Mr. Agyekum, husband to Mrs. Agyekum who spoke during the morning session. He addressed the audience on the seven fundamental truths about life among these truths were time, patience, giving, destiny, to mention but a few through the lens of his life’s journey.

Dr. Sonnie Badu, the last speaker for the evening session ushered the audience right into the throne room of God with a short but intense worship ministration. His message was titled ‘The timely word’ highlighting the diverse functions of time and was characterized by spiritual manifestations.

Lives were impacted, minds were transformed and all in all, iYES USA will certainly go down in the annals of history as a landmark event. Be on the lookout, we may be coming to a city near you soon.