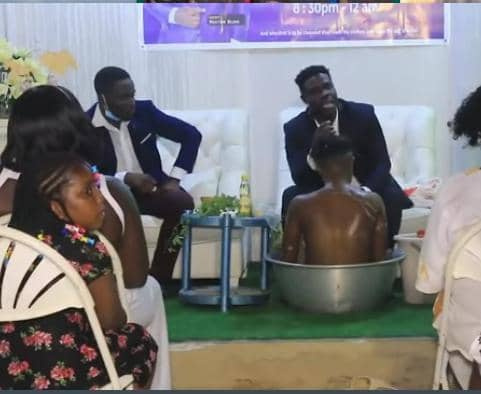 Screengrab from the controversial incident

Some female church members were bathed in at a 31st December 2021, Watch Night/Crossover service.

According to videos making the rounds on social media, a yet-to-be-identified pastor who leads the ‘Endtime Church Of Nation’ calls on his female congregants and bathes them in a basin.

When they are done, another pastor is captured applying pomade to the ladies following which a third hands underwears to them.

The location of the incident is yet to be confirmed. As he bathes the members, the pastor is heard saying in Twi that it took divine grace to be able to do what he was doing.

“Something from above …..directed me to do this directly for you. I know some people will sit in their home telling me this pastor is not from God, for me if the spirit directs you, you don’t have an option”, he said.

He submits further that members who get to take their baths on the night will get more blessings in 2022.

It is not the first time the pastor is engaged in such an action. A 2019 report by Vanguard Newspaper in Nigeria reported how he bathed in a barrel before ordering church members to drink directly from the bath water.

Welcome to Ghana where pastor baths church members both male and female. pic.twitter.com/m9Xi54WoeQ