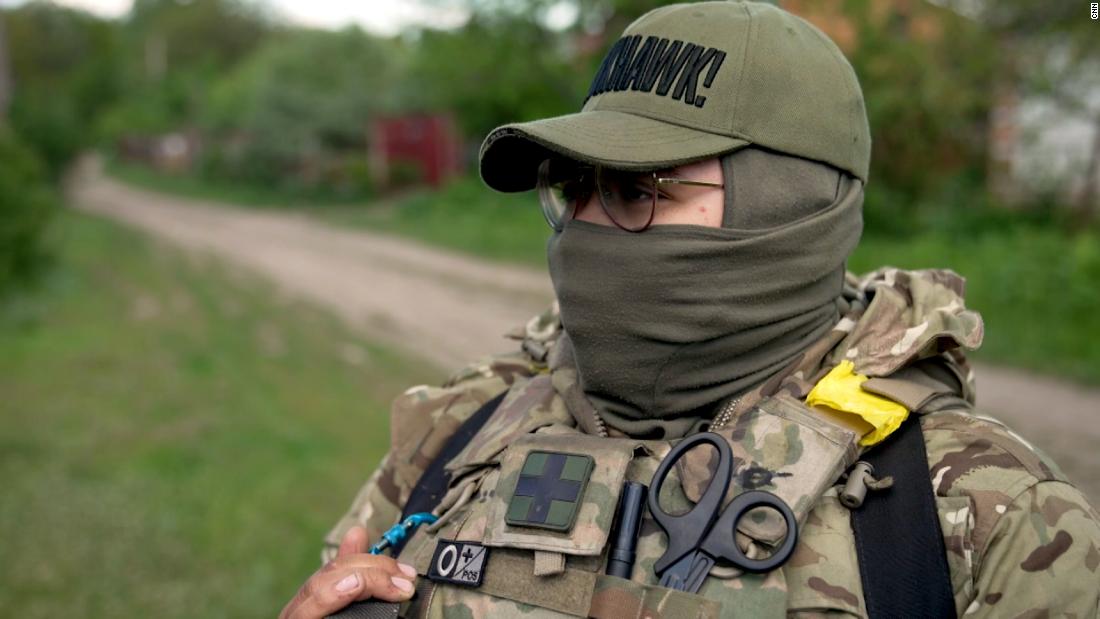 The distant rumble of outgoing artillery can be heard as we walk underneath the cover of trees. A small snake slithers by and quickly disappears. We walk up a small ramp and into a courtyard where soldiers are hurriedly packing up a vehicle in which they plan to head for the front lines. American accents are heard back and forth on their radio comms.

Surprised and baffled to see a group of journalists, they wave us away. Clearly, they have other pressing matters. But after back-and-forth calls with the commander, we’re told to find an American fighter and medic, known to her unit as “Baby Dog.”

She stands under the hot Ukrainian sun — dressed in full military uniform, her medical gear in the flak jacket pockets. Her gun rests off her right shoulder and the yellow tape — a sign of allegiance to Ukraine — is wrapped around her left shoulder and arm. She covers her face with a dark green balaclava when she speaks on camera. Only her eyes are visible through her glasses.

“I wasn’t doing much at home. It was just working two jobs, pretty boring,” Baby Dog said, speaking to CNN.

Working her two jobs, this 21-year-old American paramedic was living a mundane life in Utah when Russia’s invasion of Ukraine began. She saw the situation unfolding on the news and felt the need to do something.

So, she bought a one-way ticket to Ukraine and joined the fight to defend the nation being attacked by Russian forces.

“This is a human thing. You can’t sit back and watch. It’s like sitting and watching someone kicking a dog for no reason, kicking a dog in the head. It’s crying. You don’t stop it,” the paramedic told CNN in a village on the outskirts of Kharkiv in northeastern Ukraine.

CNN will not disclose her name or the unit’s exact location due to security concerns and risks for the foreign fighters stationed there.

She signed up with Ukraine’s International Legion of Territorial Defense, a program launched by the government in late February to recruit foreign fighters, and became a soldier. Ukrainian Foreign Minister Dmytro Kuleba said one week after the unit was launched that 20,000 people from 52 countries had volunteered to fight in Ukraine.

Working as a paramedic in a unit comprised of many American and German fighters, Baby Dog compares her new life to something out of a James Bond film.

Bond has seen his fair share of violence and death, and she experienced this for the first time a few weeks ago — witnessing combat up close.

“I had my big medic bag on. Everybody had all their gear on. It was raining, it was miserable,” she said. “We were climbing a 45-degree hill on the road and then out of nowhere, just this huge cluster bomb.”

The force of the blast threw her into the tree line, Baby Dog recounted. She could see one of their soldiers lying on the road, so she got to her feet and started to run towards him when the second bomb hit.

“I got there and then the second barrage went off,” she said. “They usually come in twos here.”

Russia’s use of the “double tap” tactic, striking the same location twice with a few minutes’ interval, creates chaos. According to Baby Dog, the bombs were cluster munitions — small bombs within a main one that explode sporadically, creating even more mayhem in an already volatile situation.

“We managed to pull him (the wounded soldier) into the tree line while the cluster bomb was going off,” Baby Dog said as she described the harrowing experience of her Dutch comrade. “By the time we got to him, he had already passed away.”

Her fallen comrade was just one of the foreign fighters killed in combat in Ukraine. Last Saturday, the spokesperson for the International Legion of Defense, Damien Magrou, paid tribute to four fighters who had recently died.

“We wish to remember and honor our fallen brothers, who travelled to Ukraine to join the bravest of the brave and fight shoulder to shoulder with the defenders of Ukraine,” Magrou said, calling the fighters, “unsung heroes who came here to defend the values they believed in and stand up against tyranny.”

And earlier this week, a court in the pro-Russian, self-proclaimed Donetsk People’s Republic (DPR) sentenced to death three foreign fighters, accusing them of working as “mercenaries,” in Ukraine. The men, two Britons and one Moroccan, were captured in mid-April in Mariupol while the fight for the port city was ongoing.

“It was very tough. The thought of, like that could have been me,” Baby Dog told CNN regarding the loss of her comrade. She says the horrors she’s seen and experienced such as this have shaken her faith in God.

“Before I hadn’t really seen what a human could do to another human for no reason. And it’s kind of shaken me a little bit to think that He would allow this or just let it happen,” she said as she looked away, thumb tapping the butt of her gun.

And while she hasn’t had dreams that haunt her sleep — any dreams for that matter — going back to the US in the future and assimilating back into a world where war is something seen only in movies and on the news will take time.

“I’m going to have to play artillery in the background to go to sleep. I don’t know,” she said chuckling.

David Danilyan contributed to this report.