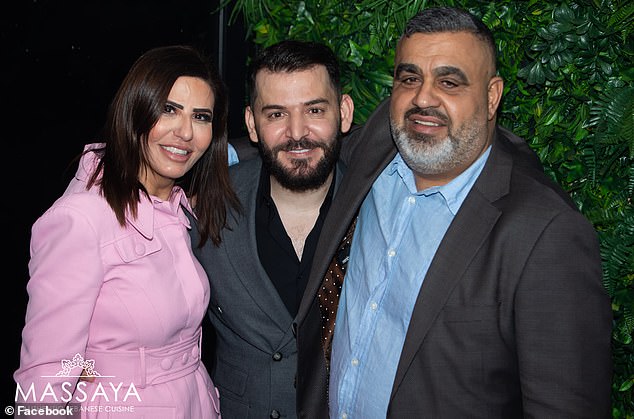 
Chilling details have emerged about how a gangland mum spent her final hours at a Lebanese restaurant going over the final details of a party she’d organised.

But Lametta Fadlallah, 48, never made it, and was gunned down on Saturday evening while sitting in the back of a Toyota 4WD, out the front of the south-west Sydney home she shared with her 16-year-old son.

She was shot dead alongside her hairdresser Amy Hazouri, 39, who had just finished a shift at her hair salon in Bankstown, believed to have been killed as collateral damage.

Now cops have begun investigations into a major question they want answered about the the shooting: What was the motive of the attackers?

Just hours before she was shot dead, a ‘happy and bubbly’ Ms Fadlallah was at Massaya Restaurant in Strathfield South doing odd jobs to help out the sons of her partner Adel Dayoub and looking over the final details for that night’s event.

The mother-of-two then headed home to Panania to get ready with her friend Ms Hazouri before the two women got into a car to head to the restaurant for a night of Lebanese entertainment, drummers and dancing.

Ms Fadlallah was a regular guest at Massaya, which is owned by her partner’s son.

Taleb Dayoub said his father’s partner showed ‘zero paranoia’ that her life could be in danger as he recalled their last conversation on Saturday morning.

‘Our last conversation was just about bookings … then she’d gone to get her hair done and get dressed, and come back for the party,’ he told the Daily Telegraph.

‘She’d come around and help (at the restaurant), it felt like she was part of the family … but she was not an owner, she had nothing to do with it.

‘Someone that has the potential of that happening wouldn’t be living like that, going out regularly, going into the city.’

Ms Fadlallah also told the owners she was bringing a teenage TikTok influencer, who was “coming to make social posts and promote the restaurant”.

Dayoub Jr. earlier told Daily Mail Australia he and his father were as mystified as everyone else as to why she was violently murdered.

‘We don’t know anything. We were just getting to know her over the last year,’ Mr Dayoub Jr. said.

‘She was very nice. My dad is in shock. He is not alright. He’s grieving.’

Footage from the street shows the gunman tapped four times on the car window before firing up to 15 bullets into the vehicle.

‘You can hear the volume of shots being fired into that car. There was an understanding there were up to four men around that car at the time of the shooting,’ he told the Today show on Wednesday.

‘It is sending a very, very clear message.’

‘We clearly know they were there for that strict purpose of, unfortunately, killing one of the ladies, and the other lady at this point in time appears to be caught up.

‘It shows they have come with a clear intent, and they have been able to carry that intent out absolutely.’

Mr Moroney said the focus of the police investigation would be wide and varied but would start with the victims, predominately Ms Fadlallah.

‘They will build a background about her business dealings, finance dealings and just ultimately trying to find a motive at this point of time,’ he said.

‘They will expand then on those lines of inquiries. They will be running inquiries around the neighbourhood, doorknocking, for example, moving through financials, going through court charge records.

‘There will be a whole plethora of lines of inquiry running parallel to try and narrow down a motive.’

‘Once we can secure that they will start to work towards the actual offenders.

Meanwhile, Sydney gangsters have suspicions Fadlallah leaked information to the police amid claims she was a ‘very big drug dealer.’

Ms Fadlallah’s mother has condemned her daughter’s killers as ‘cowards’ and warned her death will see other bodies fall as payback for her family’s loss.

‘It doesn’t matter how bad she is, they shouldn’t do that. We’re all going to die at some point,’ Nadia Fadlallah told The Australian.

‘I don’t want them to go to jail – I want them to leave them on the street the same way they did to my daughter … someone else will get them back, in God’s name.’

It comes as more details are revealed about the popular teenage TikToker seated in the car’s front seat as her hairdresser friend and Ms Fadlallah were killed.

Lametta Fadlallah was happy and bubbly on Saturday morning, according to her partner’s son

Daily Mail Australia revealed on Tuesday the 16-year-old, who cannot be named, was close with Ms Hazouri and often spent time with her at her salon in south-west Sydney socially.

On Saturday, she’d been invited to attend an engagement party with Ms Hazouri and Ms Fadlallah to create social media content at the Lebanese restaurant.

That’s when as many as four hitmen reportedly pushed the teen’s head forward and killed her friend and acquaintance with a hail of bullets.

On Monday, the teenage survivor shared a message to friends and her tens of thousands of followers on her social media accounts about the shooting.

She provided a harrowing account of what unfolded and how she hasn’t been able to stop crying since.

The young woman added she ‘is not joking about her experience’ and paid tribute to her dead friend.

‘Amy was very kind to everyone and loved everyone,’ she said in a short tribute on Instagram.

The 16-year-old, who cannot be named, was close with 39-year-old hairdresser Amy Hazouri (above) and often spent time with her both in her salon in southwest Sydney and socially

Police said on Sunday the teenager, who has more than 100,000 TikTok followers, and a 20-year-old male friend are both traumatised.

He added both young people were ‘lucky they weren’t also killed’ in the ‘incredibly violent, horrific crime’.

Earlier this year, the teen made a short clip highlighting her favourite moments with the hairdresser, saying she hoped to be beside Ms Hazouri ‘all her life’.

‘I love you so much, you were always next to me when I needed you, and I’ll always be next to you,’ she said in the message.

At one point the teen made a short clip highlighting her favourite moments with the hairdresser, saying she hoped to be beside Ms Hazouri ‘all her life’

Ms Hazouri has been remembered as a sweet and kind woman who went out of her way to help those around her.

‘Life is so unfair, I wish this is not the truth,’ she said. ‘You texted me with loving words that if I need anything just let you know but now you gone [sic].’

Ms Hazouri has been remembered as a sweet and kind woman who went out of her way to help those around her. The 39-year-old’s nail artist shared a sweet conversation they shared just days before the tragic death

The message accompanied a screenshot of Ms Hazouri’s last message to the woman, which read: ‘Good morning sweetheart. Have a safe trip, enjoy your holiday. If you need anything let me know.’

Both victims, along with the teenage girl, were preparing to leave Ms Fadlallah’s home to head to her boyfriend’s son’s restaurant in Strathfield for an engagement party when they were set upon.

The 16-year-old had reportedly been asked to promote the venue on her social media channels.

Adel Dayoub had been dating Fadlallah for about 12 months and his son told Daily Mail Australia Mr Dayoub had given police anything he could to help investigate her slaying.

The son of Adel Dayoub, who had been dating Lametta Fadlallah for a little over 12 months told Daily Mail Australia his father is helping police investigate the 48-year-old’s shooting death

Dayoub Jr., who runs the Massaya Lebanese Restaurant in south Strathfield, said he and his father were as mystified as everyone else as to why she was violently murdered

The 48-year-old was first married to Derbas in the 1990s, a key member of the Telopea St Gang – coined after the Punchbowl, Western Sydney street – which rose to infamy between 1998 and 2000 as a hornets’ nest of Middle Eastern gang activity.

More recently, she was the long-term girlfriend of underworld figure Safi – who was found dead in a Sydney apartment in January 2021 after suffering a heart attack.

A crime world source has claimed Ms Fadlallah was an active member of the city’s drug trade and subsequently owed people money, with police noting her 30-year connection to some of the city’s most notorious gangsters.

One source referred to her as ‘a very big drug dealer’, while another told Daily Mail Australia police were investigating potential debts she had amassed with ‘scary’ underworld figures.

Underworld sources also suspected she was leaking information to the secretive NSW Crime Commission before she was executed.

HOW THE UNDERWORLD HAS ERUPTED IN SYDNEY

AUGUST 29, 2020 – Fares Abounader, a Comanchero bikie was shot dead in a drive-by attack as his wife and young child were inside their Panania house.

OCTOBER 4, 2020 – Shaylin Zreika – an associate of the Alameddines – is beaten with a metal bar in a street fight in Strathfield

OCTOBER 18, 2020 – Rafat Alameddine’s former home is shot up in a drive-by shooting

FEBRUARY 15, 2021 – Bilal Hamze’s mother Maha Hamze comes under gunfire again in another drive-by shooting at her home in Auburn

MARCH 12, 2021 – A home linked to the Alameddine family in Guildford is shot up

OCTOBER 20, 2021 – Salim and Toufik Hamze are gunned down outside their home in Guildford

JANUARY 6, 2022 – Brother of Bassam Hamzy, Ghassan Amoun, is shot dead at 35 years of age in a brazen daylight execution as he sat in a BMW outside an apartment building in Western Sydney.

APRIL, 4, 2022 – Mahmoud ‘Brownie’ Ahmad aka ‘Mr Big’ is gunned down in a hail of bullets – after being warned by police that he had a million-dollar bounty on his head for his role in deadly shooting in Greenacre.

MAY 10, 2022 – Comanchero bikies with links to the Alameddine clan, Tarek Zahed and his brother Omar were shot at while training at a gym in Auburn. Omar died at the seen while Tarek miraculously survived after being shot 10 times including in the face.

MAY 14: Rami Iskander, 23, was shot in the torso in front of his pregnant wife and two-year-old child at his home on Knox Street at Belmore just before 4am on Saturday. He is the nephew of Brownie Ahmad

MAY 15: NSW Police launch Strikeforce Erebus to try and tackle the growing problem of gang violence with the Australian Federal Police and intelligence agencies partnering with state cops to stop the bloodshed.

JUNE 28: Former Lone Wolf bikie Yusuf Nazlioglu dies in hospital a day after he is hit by 10 bullets in a Rhodes underground carpark