Ofori-Atta slammed by two respected economists within one month 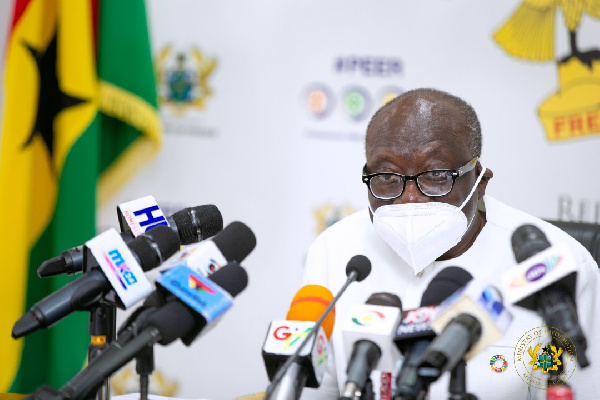 
Ken Ofori-Atta is Minister of Finance

The Finance Minister of any country is one of the topmost political actors, seeing the importance and centrality of the economy even within political circles.

Calls for the sacking of a Finance Minister will often come from opposition voices who will cite the bad state of an economy from their viewpoint.

Ken Ofori-Atta made history when he was nominated to continue as Finance Minister in the second term of the Nana Addo Dankwa Akufo-Addo government.

But in a space of one month, he has come under censure by two respected Ghanaians. Both economists are of high repute.

The most recent is Dr. Kofi Amoah who has restated that Ghana is broke and more importantly is in need of a better and stronger hand to manage the economy.

In a tweet expressing his opinion over a Bloomberg report spelling out a grim outlook for Ghana’s economy with regards to the country’s inability to service its huge debts, Dr. Kofi Amoah said a time of reckoning was upon the country.

“The time of reckoning is upon our land…our dear nation is broke and her lenders are throwing in the towel. President Akufo-Addo needs a better finance minister,” Amoah, popularly referred to as Citizen Kofi wrote.

“We must jettison the borrow for freebie development without jobs. Create jobs for the youth,” he added.

For his part, Kwame Pianim, a leading member of the ruling New Patriotic Party in December 2021 censured Ofori-Atta for excessive borrowing of the current government, which he said was leading to high public sector debts.

In an interview with TV3, he stated: “No, he hasn’t done a good job, he is over-borrowing, we are not getting value for money. Ofori Atta needs to realise that he is not just a budget and expenditure minister, he is the minister of finance.

“Finance means growing the economy. One of the things that this government said was that they are going to move away from the Guggisberg economy. Guggisberg developed and expanded the cocoa industry so there was a stream of income, he built the ports, he built the schools.

“By the time Guggisberg left we had reserved, we were not in debt. So the economy that Ken Ofori Atta is trying to build is an economy that thrives on expenditure and debt,” he stressed.

The subject of wigs worn by members of the bench and the bar has often drawn heated arguments, even as opponents and proponents seek to drum home their preference.

In September 2021, the current Chief Justice, Kwasi Anin-Yeboah, issued a circular titled: “Dress Standards in Court” addressed to all judges and professional magistrates.

The crux of the statement was an explicit order to the bench to stick to “the requirement to be fully robed in a Wig and Gown, for Court sittings at all times.”

They were also to ensure that lawyers appearing before them were well dressed to “preserve the decorum, seriousness and formality of court proceedings.”

Those against the dress code argue that it is a colonial inheritance as is much of our laws, and have argued that Justices in parts of the UK have ditched the wig and it stands to reason that Ghana will do the same.

During a recent public lecture on the Constitution, keynote speaker, Senyo Hosi despite not having legal education waded into the debate and stated a position of opposition to the wearing of especially wigs by lawyers.

In the introductory statements of his lecture, he stated: “All that I have stated about our Constitution represents no veiled attempt to appear to sound legalese nor impose on a sense that I belong to this very revered and reclusive group of people with white wigs, called lawyers.”

“I pray you change your wigs though. Black men don’t have white grey Caucasian hair,” he stressed.

Hosi on Friday, January 14, 2022, delivered the keynote address at the Constitution Day lecture at the University of Professional Studies-Accra, UPSA. The event was organized by the One Ghana Movement.

He averred among other things that the current democracy had plunged Ghana into a spiral of misgovernance in a manner depleting hopes of the people. Which spiral he continued had led by non-conformity and legitimate demand for change of the current Constitution.

The Economic policy analyst and CEO of the Ghana Chamber of Bulk Oil Distributors also advocated a customized democracy he called “Ghanacracy” as a viable means to addressing legitimate concerns of Ghanaians about the current 1992 Constitution.