NYC subway train is turned into pool party with booze, twerking girls in bikinis and DJ 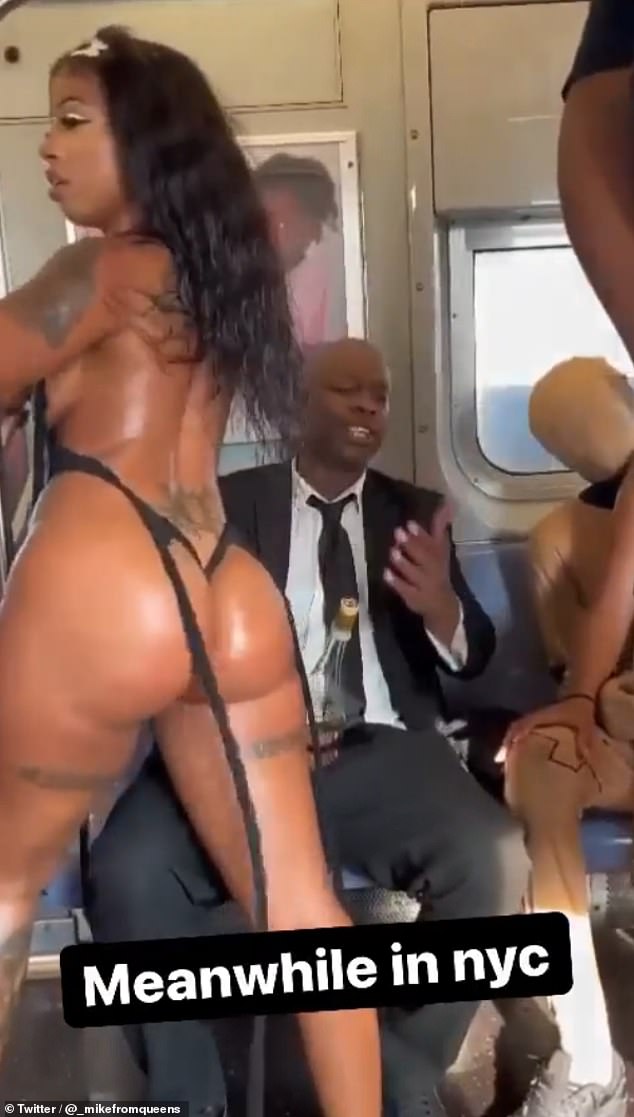 
A New York City subway train became the scene of an impromptu party, complete with women twerking in bikinis, downing shots of liquor and taking to a carriage-floor slip n’ slide.

Twitter user @_MikeFromQueens posted the jaw-dropping on Saturday afternoon, drawing both derision and delight from other Twitter users.

The dancers, who are believed to have been on an L train, bounced from passenger to passenger while taking breaks to play in the DIY paddling pool they had set up and taking turns on the homemade slip ‘n slide.

At one point, a shirtless man with dwarfism was also seen getting in on the action.

One Twitter user who saw the video called it ‘dirty,’ another said ‘this is vile,’ and one even said ‘So glad I left this hellhole and ain’t looked back.’

The women can be seen twerking on several different passengers while the partygoers pass around bottles of liquor that they pour into each others mouths.

Drinking alcohol on the subway is banned.

Several straphangers got involved in the festivities, with one suited man shown being twerked on while holding a bottle of liquor

Others enjoyed having the liquor poured into their mouths by the women, who seemed happy to share the libations around

The party featured a slip n’ slide, and guests took turns slipping around on the plastic while other passengers looked on

It’s unclear why the party took place or whether it was promotional in nature, but at one point a man holds a sign reading ‘viral exposure’ among the dancing girls.

Although the party passengers broke laws by boozing on the subway, their behavior is far from the worst to have unfolded on the beleaguered train network this year.

NYPD statistics show that transit crimes – many of them violent – are up a whopping 55 per cent this year compared to the same period in 2021.

One other user on Twitter pointed out the potential medical consequences of the party saying ‘monkeypox is gonna thrive,’ referring to the emerging danger of the new monkeypox virus.

New York has the most cases of the monkeypox in the country with 830 reported cases, followed by California with 356 cases.

The Biden administration revealed last week it’s considering whether to declare the outbreak a public health emergency, after the World Health Organization on Thursday said the virus has become a global problem.

While those most susceptible to are men who identify as gay or bisexual – about 99% of the current cases involve men who have sex with men – the diagnosis of two pediatric patients this week raised the level of concern that the virus may be targeting other populations, MSN reported.

There is mounting concern that monkeypox could spill over into other groups — including children, older adults and pregnant women — which are more vulnerable to the disease.

It does not require sex to be transmitted, and can be spread through physical contact such as touching others or a hug.

The monkey virus is not related to chickenpox, but the symptoms are similar to smallpox though milder, according to the Centers for Disease Control and Prevention (CDC).

Symptoms may include fever, a headache, muscle aches and backache. Swollen lymph nodes are also part of the virus, as swell as chills and exhaustion.

A blister-like rash may develop that may also appear to look like pimples that can surface on the face, inside the mouth, hands, feet, chest genitals, anus and other parts of the body.

The rash goes through different stages before healing completely. Those who experience monkeypox may develop the rash first, followed by other symptoms, as others may just get the rash.

The illness typically lasts up to two to four weeks.

Ghanaian contemporary music group, Nkyinkyim Band will be releasing its debut album dubbed ‘Where We…