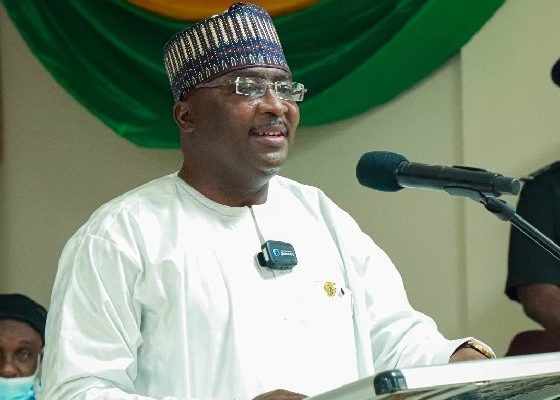 
The governing New Patriotic Party (NPP) is a political tradition that rewards unwavering loyalty and hard work, and the party will not forget the unquestionable commitment and hard work of Vice President Dr Mahamudu Bawumia, a voluntary group, I Am For Bawumia has said.

In a press statement issued on Thursday, January 13, 2022, responding to “tiny elements within the NPP” questioning the status of Dr Bawumia in the party, the group said people who pursue such “weak and laughable” propaganda are wasting their time because majority members of the NPP have resolved to reward the Vice President as the party’s next leader.

“People, who are today lagging behind Dr Bawumia in terms of popularity within the party, cannot fathom why the Vice President is loved by party members, as demonstrated at the recent national delegates conference in Kumasi and at other events,” the statement said.

“It is simple! Dr Bawumia has earned his status by dint of his commitment, hard work, loyalty, accessibility and humility,” the statement continued.

The statement added: “NPP is a truly democratic party which rewards UNSHAKEN loyalty, commitment and hard work. The venerable DMB has proven his mettle as a man of unshakable loyalty who never abandons ship. He is a man you can trust, and the party shall reward him resoundingly.”

Below is the full press release:

I Am For Bawumia Movement, has noted with optimism recent sustained, but the weak effort by tiny elements within the NPP, and their collaborators in the opposition NDC to attack the person of the quintessential Vice President of Our Republic, Dr Mahamudu Bawumia.

Ordinarily, we should have been worried by such diatribes, but when it is coming from elements who are pained by the rising formidable status of the venerable Vice President within the rank and file of the NPP, we can only be thrilled that Dr. Mahamudu Bawumia is indeed the man of the people.

And when such tactless propaganda is being fuelled and amplified by elements within the opposition NDC, led by one of their chief strategists and an arch enemy of the NPP, there can only be one meaning to that; which DMB is feared by both his opponents within and the opposition party.

At a time the name Dr. Mahamudu Bawumia is on the lip of the overwhelming majority of NPP faithful as the next to lead the party, it is amateurish for any serious political strategist to launch a lame campaign to question the status of Dr. Bawumia in the NPP. Even a political neophyte won’t there question the status and contributions of a man who has made a history that may never be broken as a two-time running mate and a two-time Vice President in the NPP and Ghanaian political history.

But we are not surprised! Some of these seasonal political merchants only thrive when they sow seed of discord in the NPP to show to their paymasters, internal and external that they are working.

That time is here, and they have emerged from their hideouts, thinking they are wiser than majority and well-meaning members of the party.

They can impress their paymasters with such weak, hollow and laughable propaganda, but they can never deceive the overwhelming majority of NPP members, who are resolved to resoundingly reward Bawumia for his hardwork, especially to the party over the years.

BAWUMIA, A MAN OF UNWAVERING LOYALTY AND COMMITMENT

If today Dr. Mahamudu Bawumia has attained formidable status in the NPP tradition and he is the people’s favourite to lead the party next, it is because of his unwavering loyalty and commitment to the NPP party, as well as his humility to all manner of people.

People, who are today lagging behind Dr. Bawumia in terms of popularity within the party, cannot fathom why the Vice President is loved by party members, as demonstrated at the recent national delegates conference in Kumasi and at other events.

It is simple! Dr Bawumia has earned his status by dint of his commitment, hard work, loyalty, accessibility and humility.

As a committed member, Dr Bawumia remained resolute, abandoned his burgeoning banking career and accepted to be a running mate for three consecutive times after losing the previous two. Having put his banking career on the line, he also put his political career on the line after the 2nd defeat in 2012 by being the NPP’s STAR WITNESS in the 8-month long 2012 election petition at the Supreme Court.

Where others feared and run away, Dr Bawumia put himself up for the party, and in the witness box alone, he fearlessly and gallantly defended the NPP with his sterling performance in eight long months.

An overwhelming majority of NPP members have not, and will not forget this singular act of bravery alone by Dr Bawumia.

As a hardworking and brilliant Vice President, the fruits of his labour have been one of the biggest talking points for the Akufo-Addo government. If digitization has today become the hallmark of the government, it is undoubtedly down to the hard work of Dr Bawumia.

His hard work extends to his commitment to be on top of government businesses as Head of the Economic Management Team, as most are linked with the digitization drive and the remarkable management of the economy.

As a loyal member of the party and government, Dr Bawumia’s status as the chief critic of the NDC and the defender in chief of both the NPP and the NDC is never in doubt. Both as a running mate and as Vice President, members of the NPP could always rest assured that in Dr Bawumia, they have a fearless, clever and loyal member who is always ready to dismantle the NDC’s propaganda against the party, and also communicate government’s achievements to Ghanaians.

To the seasonal political merchants, who are pretending not to be aware of the potency of Dr. Bawumia, and why he is so loved by party members, they should just revisit campaign periods for recent elections which Bawumia was running mate, and see how he has worked hard to turn many hitherto, NDC strongholds into NPP fortress.

The seasonal political merchants can spread their weak propaganda to milk their paymasters, but NPP faithfuls are too smart!

Bawumia is not a seasonal politician who abandons ship and resurfaces when the storm is over. Rain or shine, in victory and in defeat, he is with the party, and very accessible to members, regardless of status, even as Vice President.

The venerable DMB has proven his mettle as a man of UNSHAKABLE loyalty who never abandons ship. He is a man you can trust, and the party shall reward him resoundingly.