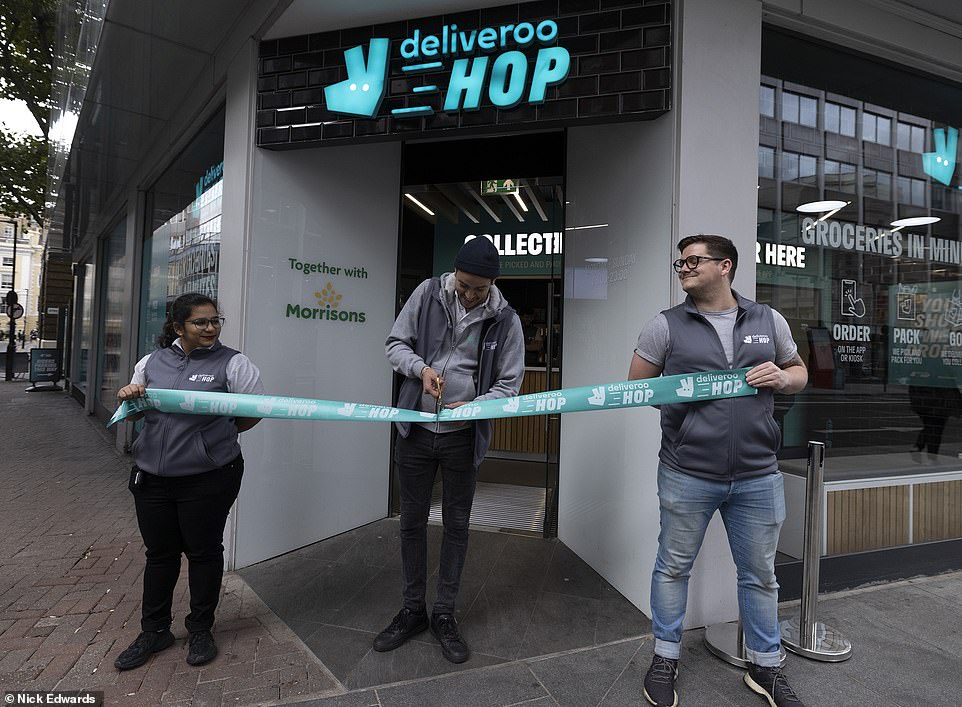 
A new supermarket run by takeaway giant Deliveroo flopped on its first day of trading today – with just TWO customers turning up to order food in the 90 minutes of the store’s doors opening.

The British tech firm threw open the doors to its new ‘Deliveroo Hop’ shop in New Oxford Street at 3.30pm this afternoon.

A flurry of riders and delivers could be seen entering and leaving to rapidly get orders to people’s homes.

But our reporter counted just two people who were not shop employees using the new ‘digital kiosks’ to order food directly from the store.

All of the 1,750 grocery items on sale will be supplied by Morrisons, who have partnered as Deliveroo’s official food provider for the store.

Retail property consultant Toby Comerford, 58, from Ivinghoe in Buckinghamshire, was the first customer in the store.

The British tech firm threw open the doors to its new ‘Deliveroo Hop’ shop in New Oxford Street at 3.30pm this afternoon

A flurry of riders and delivers could be seen entering and leaving to rapidly get orders to people’s homes (Pictured: The interior of the store)

He said: ‘I heard about it on LinkedIn and I thought I would come and look at it.

‘If you had one in Euston it would be very useful. I could order what I want before getting on the tube and it would be ready for me when I get out of the tube.

‘You can be in the office and order it and it is ready in five minutes.’

Passer-by Cerys Burton, 22, an actor from Clapham in South West London, said she would consider using one if they opened in a residential area.

She said: ‘If there was one more locally I think I might use it.

‘It looks quite convenient and obviously being Deliveroo it should be quite easy to use. If there were more of these outside of central London then it could catch on.’

Other passers-by were more sceptical of the idea- saying it doesn’t do anything that can’t be done on an app already, isn’t cheap enoigh, isn’t a good place to do a big food shop and may prove difficult for old people to navigate.

Edward Kirk, 26, a student from Marylebone, central London, said: ‘I use Deliveroo through the app, but I don’t think I would go inside there because it defeats the purpose of it.

‘I would not use, it is nothing new.

All of the 1,750 grocery items on sale will be supplied by Morrisons , who have partnered as Deliveroo’s official food provider for the store

‘If you want something quick you can just use the app. I already have the Hop app and use it to buy things from Waitrose and Morrisons.’

Oyana Owono, 23, from Woolwich, South East London, who works in a nearby Pret, said: ‘It does not look like something I would really do.

‘It depends on if you have time and I like to do only one big shop a week.’

The business venture comes after the firm, set up by entrepreneurs Will Shu and Greg Orlowski, saw success with rapid grocery deliveries during the Covid pandemic – when many people turned to home deliveries instead of visiting supermarkets.

But with fellow delivery giants Amazon pushing its grocery store business, and other grocery delivery start-ups nipping at its heels, the company is expanding its two wheels empire with bricks-and-mortar.

Eric French, chief operating officer of Deliveroo, said: ‘We are opening our doors and welcoming commuters, local residents, visitors and day-trippers into our first Deliveroo high-street grocery store in the UK.

Takeaway delivery firm Deliveroo is wheeling its way into the supermarket business, by openings its first ever grocery store on Oxford Street (pictured)

All of the 1,750 grocery items will be supplied by Morrisons , who have partnered as Deliveroo’s official food provider for the store (pictured)

So how DOES the new Deliveroo store work?

Customers can walk into the New Oxford Street store and make an order via the digital kiosks. A staff member will then pack the shopping from behind the counter and then hand the order to a customer when ready.

2) Order via the app and collect

Customers can order groceries from the New Oxford Street store via the Deliveroo. A staff member will pack the shopping and the customer can then pick up the groceries when the order is completed.

3) Order via the app and delivery

Customers can order groceries from the New Oxford Street store and then have them delivered to their home.

‘Our New Oxford Street store promises a new way to shop for Deliveroo customers, giving them even greater flexibility and choice, and should help boost the local area, with nearly two-thirds of shoppers saying they will visit other nearby shops as they come to shop with Deliveroo.’

For its new site, Deliveroo has partnered with Morrisons to sell items, including ready meals, fresh food from its The Best range, and cupboard staples.

Customers will be able to order groceries through digital kiosks in the store – much like customers do in fast food outlets such as McDonalds – and wait for an in-store assistant to pack them from behind the counter.

They can also pre-order items via the Deliveroo app and collect them when they are ready.

The firm said this means people can skip the supermarket shop and walk away with their groceries in minutes.

Deliveroo say that customers can also still order home deliveries from the Oxford Street store through the app.

Supermarkets have been keen to cash in on the demand for rapid delivery that grew during the pandemic, with many signing up to food delivery platforms like Deliveroo and Uber Eats.

Deliveroo – which has around 7,000 grocery sites in the UK and Ireland – partnered with supermarket giants like Waitrose and Sainsbury’s and pledges to deliver in as little as 20 minutes.

Located on the capital’s New Oxford Street, the shop will allow users of its app (pictured) to order food and groceries for pick-up or delivery

It comes after the British firm, set up by entrepreneurs Will Shu (pictured) and Greg Orlowski, saw success with rapid grocery deliveries during the Covid pandemic – when many people turned to home deliveries instead of visiting supermarkets

The launch comes a month after Deliveroo revealed it was operating at a loss of £147 million in the first half of the year, after cash-strapped consumers cut back on takeaways.

Its half-year losses had widened significantly from the £95 million posted a year ago.

In another blow to the business, its non-executive director Lord Wolfson, chief executive of high street chain Next, said he had stepped down from its board 18 months after taking on the role.

Lord Wolfson said his role at Deliveroo was ‘no longer compatible with my executive and other commitments’.

But Deliveroo said it was making good progress in its profitability plan and planned to pull out of the Netherlands to shore up more cash.

Its new London store launched on Monday and will open from 8am to 11pm, as well as delivering to local residents and offices.