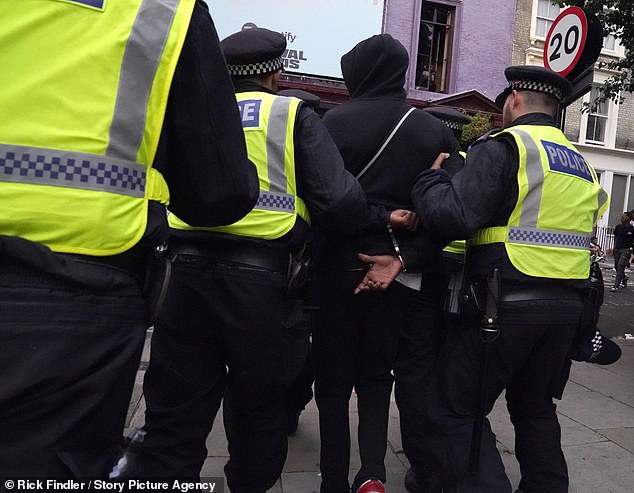 By Charlotte Mclaughlin For Mailonline

Met Police said that ‘serious stabbings’ and ‘incidents of violence’ have broken out in the streets of London following the Notting Hill Carnival last night.

Police activated special stop and search powers from 9.24pm on Monday until 1am this morning in the areas surrounding the two-day festival after it ended yesterday evening in West London.

The force has so far not given any indication of the numbers of victims or said whether there have been arrests relating to the incidents.

Officers imposed the Section 60 order within the Carnival area and its borders, which allows police to stop and search a person without suspicion for ‘dangerous instruments and offensive weapons’ under the Criminal Justice and Public Order Act.

Yesterday, Scotland Yard revealed that officers had made 76 arrests over separate incidents as of 7am on Monday – including 19 for assault, four for sexual assault and grievous bodily harm and ten for possession of an offensive weapon.

The last day of the festival, the Adults Day parade, which ended officially at 8.30pm and saw many attendees dressed in colourful, sparkling costumes to match the dancers was also said to have been largely peaceful.

Police activated special stop and search powers from 9.24pm until 1am this morning in the areas surrounding the two-day festival after it ended on Monday evening in West London

Metropolitan Police Events tweeted late on Monday: ‘A Section 60 order is in place within the Notting Hill Carnival footprint and borders.

‘This is following a number of violent incidents and serious stabbings. Crowds remain within the footprint and wider areas.’

It comes after a Met Police horse died after collapsing while on duty at the carnival on Sunday evening as an investigation was launched into Police Horse (PH) Sandown’s death.

The Metropolitan Police said the most recent carnival in 2019 cost it £8.6million to police. The festival does however bring hundreds of thousands of tourists into London and creates an estimated £120million for the economy.

Notting Hill Carnival is the largest street carnival in Europe and an estimated two million people are expected to attend over the course of the Bank Holiday weekend.

The carnival first started in 1966, when about 1,000 people attended, and is famous for its celebration of Afro-Caribbean traditions.