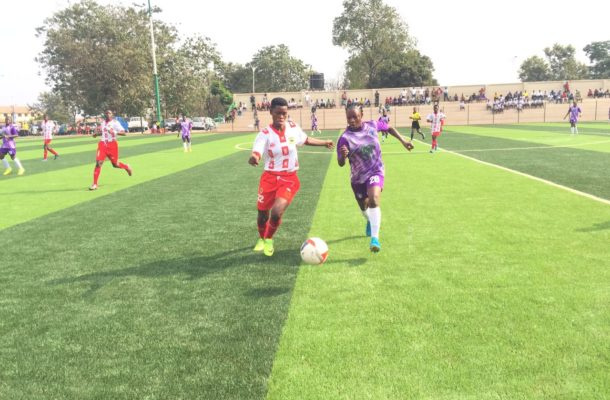 The fixture was honoured at the Bantama Kokooase Astro Turf

Northern Ladies travelled to Kumasi to frustrate giants Fabulous Ladies at the Bantama Kokooase Astro Turf in a 0-0 stalemate. Both teams came into the match in search a win to get their season back on track but failed to take their chances as the game ended goalless.

Northern Ladies started to show some positive signs in the early stages of the game but the pressure yielded no result as the home side quickly settled down and took control of affairs.

Janet Adu Agyemang of Fabulous Ladies was the first player to be booked in 26th minute after a cynical tackle in midfield.

Fabulous Ladies began to exert themselves in the game as they piled pressure and push players forward in search of the opener but had their strikers to blame as they fluffed decent chances in the 38th and 41st minutes of the first half.

Back from the break, Millicent Obeng Bondah of the home team was booked for an offence on the 48th minute as the game became more physical.

The home side came into the game very well prepared and eager for the points but their work on the day wasn’t enough to get them all the spoils. Fakiha Alhassan of Northern Ladies was also booked in the 55th minute for a dangerous foul.

Both teams brought in fresh legs in search of the much important goal but it didn’t bear any fruit as the game ended in a stalemate – leaving Northern Ladies without a win after three League matches.

The Most Valuable player of the match was given to Ohene Nana Ofori- Amanfo – The goalkeeper of Fabulous Ladies.