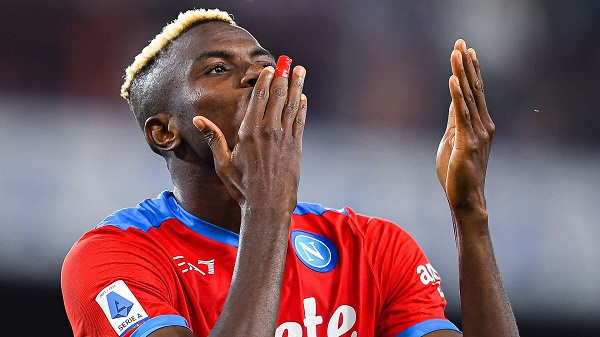 The Super Green Eagles of Nigeria have been dealt with a massive blow as they lose four key players for the 2021 Africa Cup of Nations in Cameroon.

The much-anticipated tournament has been scheduled between January 9 and February 6, 2022.

Nigeria is among the 24 country’s set to battle for the covetous trophy in the Central African country.

Ahead of the continental showpiece, Nigeria has been handed a massive blow as they lose Victor Osimhen, Emmanuel Dennis, Leon Balogun, and Shehu Abdullahi for the tournament due to various reasons.

Victor Osimhen who plies his trade for Napoli has been ruled out after contracting Covid-19 and also failing to recover from a facial fracture that required surgery.

Emmanuel Dennis on the other hand will not be available due to a late invitation as Watford block him from joining the Super Eagles.

Osimhen and Dennis have been replaced by Henry Onyekuru of Olympiakos and Slavia Prague’s Peter Olayinka respectively.

Venezia’s Tyrone Ebuehi and Oluwasemilogo Ajayi — who plays for second-tier English side West Brom — come in for Abdullahi and Balogun.

Share. Facebook Twitter Pinterest LinkedIn Tumblr Email
Previous ArticleEveryone here is just looking at me – BBNaija’s Angel writes as she shares photos of outfit she wore out
Next Article ‘Doctors said I may die soon’