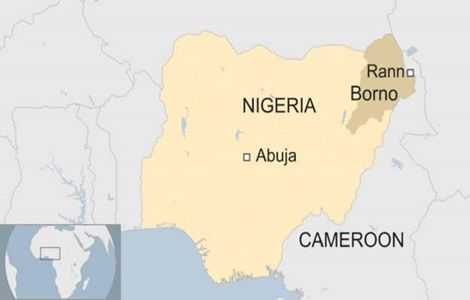 
At least 32 people have been abducted at a train station in Edo state, southern Nigeria, the authorities say.

Among those taken were station staff and passengers waiting for a train.

The security forces, helped by local hunters, have launched a search-and-rescue operation for the victims.

There have been increasing concerns about attacks in the country. The latest incident comes in the month before a presidential election where security is a major campaign issue.

Reports say that on Saturday a large number of gunmen, armed with AK-47s, shot in the air as they entered the station in Igueben before seizing the travellers and staff and taking them to a nearby forest.

Some of those who managed to flee sustained bullet wounds, eyewitnesses have been quoted as saying. One woman with a baby also reportedly escaped and found her way to a neighbouring community where she has been rescued.

The kidnappers also released two children as it was “believed that they felt the children will slow down their movements”, a local resident is quoted by the Vanguard newspaper as saying.

Edo state government spokesperson Chris Osa Nehikhare said that many people had started using the train as the local road had become “a no-go area, with huge ransoms being collected from families of [kidnap] victims”.

Incidents of kidnapping for ransom, as well as gunmen targeting communities for political reasons, have been on the rise in recent years in Nigeria.

In December, a major rail service linking the capital, Abuja, with the northern city of Kaduna, resumed nine months after at least nine passengers died during a gun attack on the train line. Many others were taken away as hostages and the last one was released in October.

Insecurity is one of the key campaign issues ahead of Nigeria’s general elections in February when a successor to President Muhammadu Buhari will be chosen.