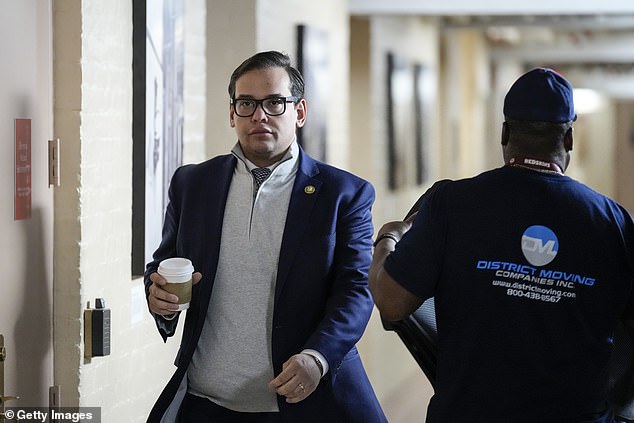 
Republican leaders of Nassau County eviscerated Rep. George Santos in a press conference Wednesday and even called on their fellow New Yorker to resign from Congress.

Fellow new Rep. Anthony D’Esposito joined the group remotely to call on his colleague to resign.

Shortly after the news briefing the Conservative Party of New York State released a statement calling on Santos to resign.

‘Santos’s profound misuse of mistruths as a candidate morally disqualifies him from serving in public office and exposes him to potential legal action, seriously compromising his ability to represent his constituents,’ said party chairman Gerard Kassar.

Santos, asked if he was planning to resign following the call, told reporters: ‘I will not.’

Republican leaders of Nassau County eviscerated Rep. George Santos in a press conference Wednesday and even called on their fellow New Yorker to resign from Congress

Nassau County Executive Bruce Blakeman said that his office would have ‘no interaction’ with the GOP congressman from New York’s Third District until he resigned.

He said that Santos calling himself a Jew was ‘ridiculous’ and ‘really tragic’ given the number of descendants of Holocaust survivors who live in his district.

New York state senator Jack Martin confirmed he will not be working with Santos’s office either. He admitted it was unlikely Santos would heed their call – noting it is ‘probably impossible to shame the shameless.’

‘But here we stand united in sending a message that until he is removed by one way or another,’ Martin added.

Nassau Count Republicans stand together to call on Santos to resign

The group of officials called Santos’s response to his piling lies ‘insincere, glib and insulting.’

Republican Hempstead town supervisor Donald Clavin said: ‘He’s unified the country in their opposition to him. He’s a national joke. He’s an international joke, but this joke’s gotta go … Resign immediately. Not tomorrow. Not next week. Today.’

Pamela Panzenbeck, the mayor of Glen Cove, N.Y.  in Santos’s district, said: ‘We were all duped, and we’re appalled and angered.’

‘It’s time for you to resign, George,’ Panzenbeck said. ‘He’s making a mockery out of entire congressional system.’

Blakeman even suggested that Santos seek out psychological help.

‘He needs help. This is not a normal person,’ he said, calling Santos’s lies ‘pathological.’

Cairo said that Santos would not be welcome at future meetings or public events at the Nassau GOP headquarters.  ‘He’s disgraced the House of Representatives, and we do not consider him one of our Congress people.’

Cairo admitted that the county’s political arm did not properly vet Santos before propping him up.

‘Shame on me for believing people,’ he said. ‘We are now going to change our process.’

Cairo said he has not spoken to House Speaker Kevin McCarthy. GOP leaders have so far remained mostly silent on the deception.

Santos was a safe vote for McCarthy at a time he needed every vote he could get to win the Speaker’s gavel. So far at least three members of McCarthy’s conference – Reps. Mike Gallagher, R-Wisc., Nancy Mace, R-S.C., and Dusty Johnson, R-S.D., have publicly said Santos should not get committee assignments.

McCarthy said Wednesday Santos would not be seated on any of the top committees, whose members will be decided today.

Both McCarthy and Scalise claimed not to have seen the Nassau GOP calls to resign when asked about them right after the press conference.

‘Let me read it and I’ll respond,’ McCarthy said.

Cairo said that when he was vetting Santos as he was prepping a run for office the 34-year-old knew he was into sports and claimed to be a star on the Baruch volleyball team who helped lead the team to the league championship.

The Baruch men’s volleyball team did win the league championship in 2009 but Santos could not have been on the team because there is no record of him ever attending the college.

CLC accused the New York Republican of illegally using campaign donations for personal expenses, including to pay rent, and for concealing the origins of the $700,000 Santos said he loaned to his campaign.