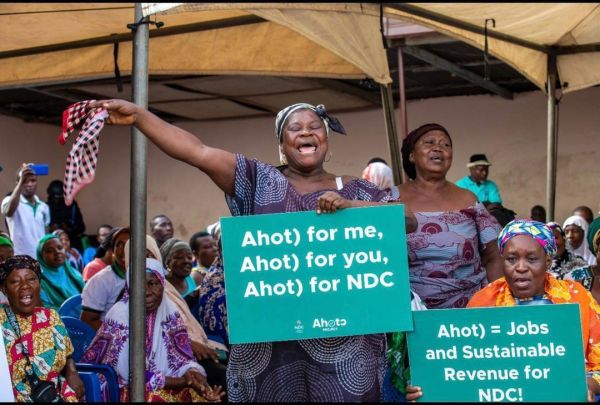 
The National Democratic Congress (NDC) Ahotor constituency business project launched by the party at its Adabraka headquarters in Accra on June 23 2022 has now been initiated in the Ashanti region.

Dr Kwabena Duffuor, a native of Kumawu in the Ashanti region, has said that the initiative was born out of stakeholder consultations with the NDC grassroots and it is his contribution towards the strengthening of the NDC in preparation for recapturing power in 2024.

The general secretary of the opposition announced during the national launch that the party has officially endorsed the #NDCAhotor business project initiated by Dr Kwabena Duffuor in order to build the capacity of the party structures to run effectively and enable it to win power in the 2024 general elections.

‘’We survive on dues, contributions and donations from members of the public and our own members. We’re proud to say that the initiator of the Ahotor project, Dr Kwabena Duffuor, is a former appointee of the NDC government who worked as governor of the bank of Ghana and a finance minister who turned things around between 2009-2012’’.

The general secretary commended Dr Kwabena Duffuor for initiating a project that is not based on consumable goods but on a sustainable and self-replenishing project akin to teaching people how to fish rather than giving pieces of fish to people.

‘’This money could have been used in buying consumables like the NPP were distributing frozen chicken parts in the last elections’’. He continued, ‘’This Ahotor project is intended to build the capacity of the party structure to run effectively. It is not going to provide anybody with pocket money. It is a contribution that will support the party itself to grow, to develop its own capacity to finance its activities and I think that in that sense it is a very commendable project’’.

Ashaiman and Klottey Korle constituencies in the greater region were the first beneficiaries of the business initiative in May and June this year and on Sunday, August 28 2022, three additional constituencies in the Ashanti region welcomed the NDC Ahotor train with pump and pageantry. The three included Sekyere Afram Plains, Kumawu and Asante Akyem North constituencies.

The Ahotor business suite comprises 4 rooms of canopies, 100 plastic chairs, and a full set of Public Address systems at the cost of Ghc 30.000 for each constituency. This business suit will be rented out to the public for outdoor events such as funerals, weddings, child-naming ceremonies, political campaigns and many other events to generate income for the party.

Dr. Kwabena Duffuor has assured the party leadership that he has many more of such empowering projects in the pipeline for the NDC with his main goal being to empower the NDC party structures to be able to kick the NPP out of power in 2024.

‘’The party grassroots must be financially and logistically resourced for the battle ahead in 2024. This is what the Ahotor project is all about but this is only the first out of many other projects that will spring up for the benefit of the NDC grassroots’’, he said.

The former Finance minister and BOG governor who is widely tipped to challenge former President John Mahama in the NDC flag bearership race for 2024 recently asked Ghanaians in a JoyNews interview that they should try a business person as President after several years of entrusting mainly lawyers and communicators with the top job.