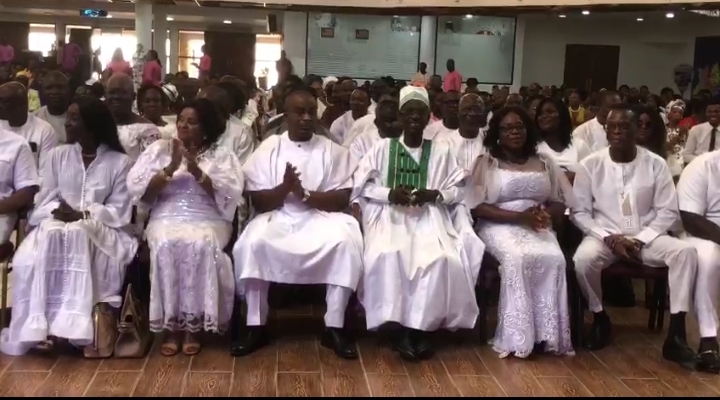 
Supporters and leaders of the opposition National Democratic Congress (NDC) joined congregants of the Perez Chapel Dome in Accra for a Thanksgiving Service.

The joint fellowship was led by the newly elected National Chairman of the party, Johnson Asiedu Nketiah, and the General Secretary, Fiifi Fiavi Kwetey.

Also in attendance were former and incumbent Members of Parliament and other bigwigs of the party.

In congratulating the newly elected executives, the founder of the Perez Chapel International Church, Archbishop Charles Agyinasare charged the leaders to endeavour to protect the public purse if elected into power.

“Those of you who gain political power must not use it to amass wealth for yourselves and your loved ones. You must exorcise the perception that Ghanaian politicians go into public service to steal from the public purse and not to do service to the nation.”

He also asked that political parties must act as the vehicles on which development is carried across the various sectors of the country to improve the living conditions of citizens.

“As agents of development, political parties must make sure they implement sound social and economic policies to improve the living conditions of citizens.”

The Archbishop also called for peace and social cohesion among the various political parties and their supporters in the lead-up to the 2024 general elections to prevent any chaos that may arise.

“As we move into major campaign activities toward the 2024 elections, all parties must endeavour to maintain the peace of the country.”

On his part, the National Chairman of the NDC, Johnson Asiedu Nketiah while addressing the congregants said the party needs God’s intervention ahead of its election of the flagbearer and the 2024 General election.

“We want to continue to plead with the Archbishop and the congregation to continue to pray for us so that we can get through the next phase of the exercise and to pray again, not for the NDC to come to power but to pray for the country to get the right government.”

Mr. Nketiah said it is important for the general population to pray for God’s intervention in electing the right leaders and government because bad electoral choices often come with bad consequences.