Nadhim Zahawi lashes out at ‘smears’ in Tory leadership race 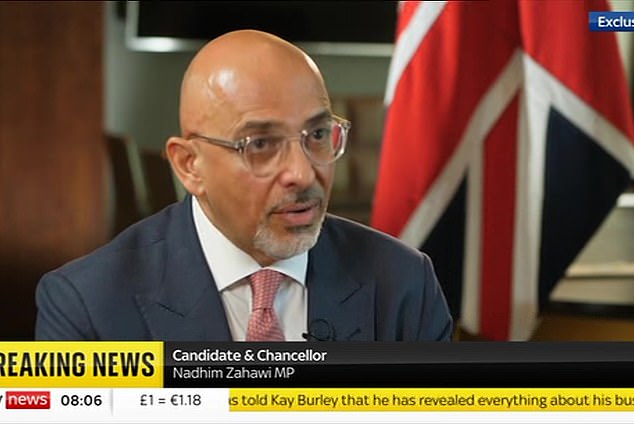 Nadhim Zahawi lashed out at ‘smears’ today as he insisted he is ‘not aware’ of any investigation into his financial affairs.

The new Chancellor also attempted to turn the tables by vowing to publish his tax return annually if his Tory leadership bid is successful.

There have been claims that HM Revenue & Customs (HMRC) is probing Mr Zahawi after civil servants raised a red ‘flag’.

But Mr Zahawi, who founded polling firm YouGov and is believed to be worth around £100million, dismissed the suggestion and said he will ‘not apologise for being a successful businessman’.

He also refused to give any estimate for his personal wealth saying he would ‘probably get it wrong’ and ‘these things move around’ with changes to investment values.

Mr Zahawi told Sky News: ‘I was clearly being smeared. I was being told that the Serious Fraud Office, the National Crime Agency and HMRC are looking into me. I’m not aware of this. I have always delivered my taxes and paid my taxes in the UK.’

He added: ‘I will answer any questions HMRC have of me. But I will go further. I’m going to make a commitment that if I’m PM I think the right thing to do is publish my accounts annually.’

In a full statement, he said: ‘I have only been resident of one country since arriving in the UK as an 11 year old. I have never sought tax status in any country other than the UK.

‘I’ve answered these supposed allegations because I think the right thing to do is to be transparent. I have corrected the record. I trust these smears will now be seen for exactly what they are.

‘I do not apologise for being a successful businessman. I am the beneficiary of the British dream and I know that. I have done well by investing in the UK and I think that’s something which should be celebrated. I want everybody to have the opportunity to be successful.’

He added: ‘When a country gives you as much as it has given me, you can never truly repay it. But I will do everything in my power to try.’

HMRC declined to comment on the alleged investigation as the authority does not go into the details of individual taxpayers.

Mr Zahawi’s pledge came after Sajid Javid said that leadership candidates should be ‘open’ about their tax affairs if they wanted to become PM.

The Chancellor’s business history has come under increased scrutiny since his appointment as Chancellor last week in Mr Johnson’s tumultuous Cabinet collapse.

He accepted the job in No11 after Rishi Sunak resigned from the post citing concerns over Mr Johnson’s handling of the cost-of-living crisis and numerous political scandals.