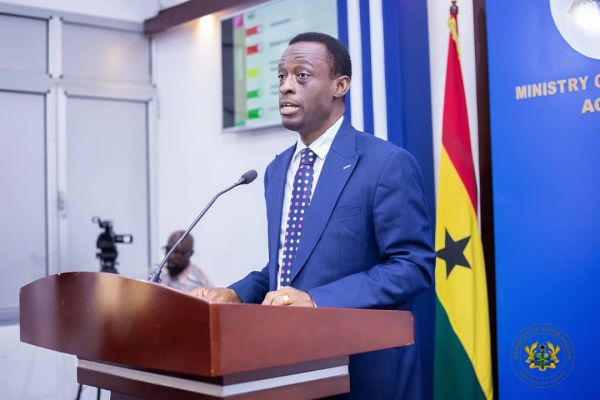 
Western Regional Minister, Kwabena Okyere Darko-Mensah has disclosed the faces behind the reports that went viral that his driver had bolted away with his GH¢ 17 million proceeds from an illegal mining (galamsey) activity.

The news which gained traction on social media and other media outlets was told of a Minister who had collapsed as a result of an alleged theft.

Kwabena Okyere Darko-Mensah was said to be that Minister and he came under public criticism for allegedly engaging in galamsey which is a menace to the country.

The Minister, reacting to the issue on Peace FM’s “Kokrokoo” panel discussion programme Thursday morning, stated categorically that the orchestrators of the allegations were members of his own political party, the New Patriotic Party.

” . . this is not the first time they’ve been doing this and I want to tell you some of the people who are doing this, in fact, those who did this were NPP people or former NPP people,” he told the host Kwami Sefa Kayi.

According to him, his detractors have accused him of so many things including saying “he’s bought all the houses at Takoradi”.

“How can I buy all the Takoradi houses?”, he cried out.

He said these NPP people’s mission is to distract him from clamping down on illegal miners in the Region and also destroy his reputation.

Refuting the claims that he is involved in galamsey and reports of his driver absconding with his galamsey money, the Minister emphasized that, “it’s all propaganda . . . I’m even wondering how people imagined it and how people even believed it. The driver never took or stole my money nor any person’s money to any place”.

“In fact, the day they told me that this is what had happened, I was in my office. I was sitting there with my Regional Chairman . . . It was honorable Joe Wise who called to tell me that he’s seen the EIB Network has done an innuendo with my picture circulating all over the place and that how am I doing. He’s heard that I have collapsed and I responded that, no, I haven’t collapsed; I’m in the office,” he added.

He also stated emphatically that he has not forgiven EIB Network for spreading the allegations.

“I was wondering that how can a media house we assume to be big like EIB can listen to this tape and still do these innuendos with my name. It’s not fair. That is what worries me. Media people are supposed to be the gatekeepers in this country, so when you are doing something, you have to think about it before you do. So, when they did that, I asked myself how can they do this?”

He urged Ghanaians to disregard the fake news saying, “I want to let Ghanaians know that those things that they said about me are all false. I won’t forgive them (EIB Network) because if we don’t stop them from doing it now, they will continue to distract governance in this country. We won’t allow it”.