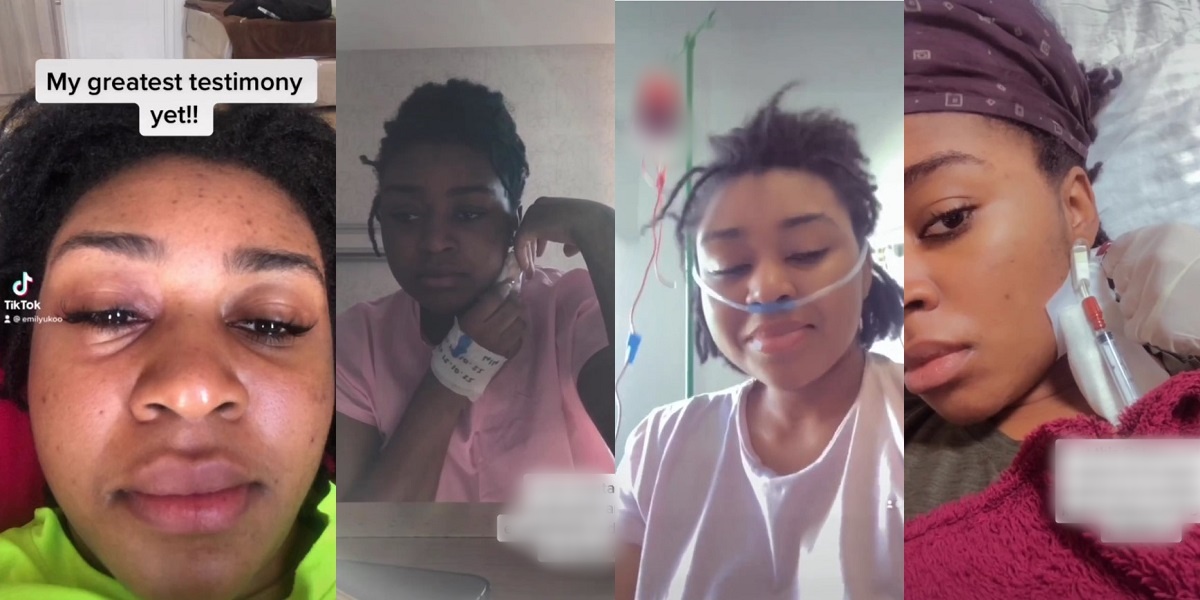 
A young Nigerian lady has shared the astounding testimony of how she was completely made whole after suffering kidney failure.

The lady, identified as Emediong Uko, in a video posted on her Instagram page, narrated how her two failed kidneys jerked back to life without any dialysis.

According to her, she took ill in October and thought it was malaria or typhoid but upon examination, doctors discovered that her two kidneys were dead. She was given the option to either undergo kidney transplant or lifelong dialysis.

However, she kept worshipping God in spite of her pain and trusted him to heal her. After spending 23 days at the hospital, she was given a clean bill of health to the surprise of nurses and doctors at the hospital.

Emediong shared videos of her moments in the hospital and gave a detailed narration of how she was healed,

I’m overall grateful for life! 🙏🏽🌤🤍 What I thought was malaria and typhoid spiraled into a myriad of illnesses with the highlight being Kidney Failure on both kidneys. In a matter of 28 days, every horrible illness from high fever, tinnitus & partial hearing loss, internal bleeding, a urinary tract infection, anaemia, fluid accumulation in the lungs and a drastic 20kg weight loss came upon me. When the doctors had pronounced both the kidney tissues dead, they couldn’t even tell me an estimate as to when I’d leave the hospital. They gave me options like transplants and lifelong dialysis to keep me alive for longer than I had.

I asked the Holy Spirit one morning- “are these kidneys really dead like they say?”
And he responded saying “they are only SLEEPING. Speak to them to wake up”.

My friend @victoriamusaa pointed me to Mark 5:41 where Jesus also saw a dead girl and said she was ‘sleeping’. From then the words “talitha koum” (which means “wake up” as Jesus said ) were my anthem. I actually spoke to this kidney like it had the intelligence to wake up- because it does. Not even up to the next day (Friday last week) the doctor tells me she checked again and the tissue wasn’t completely dead. For the next few days the nurses were scared + impressed that I was doing amazing without any need for dialysis. As of Wednesday, I got my clean bill of health that both kidneys had picked back up to normal functioning on their own. When we say “more than conquerors” it’s not just a phrase. It was never a metaphor. When you have the life of God in you, nothing qualifies you as ‘normal’. He makes everything brand new! 🕊

This testimony would not be complete without the gift of men that God gave me. These people in my life gave everything in them to see me through this journey. I love you all!!! 🫶🏼”