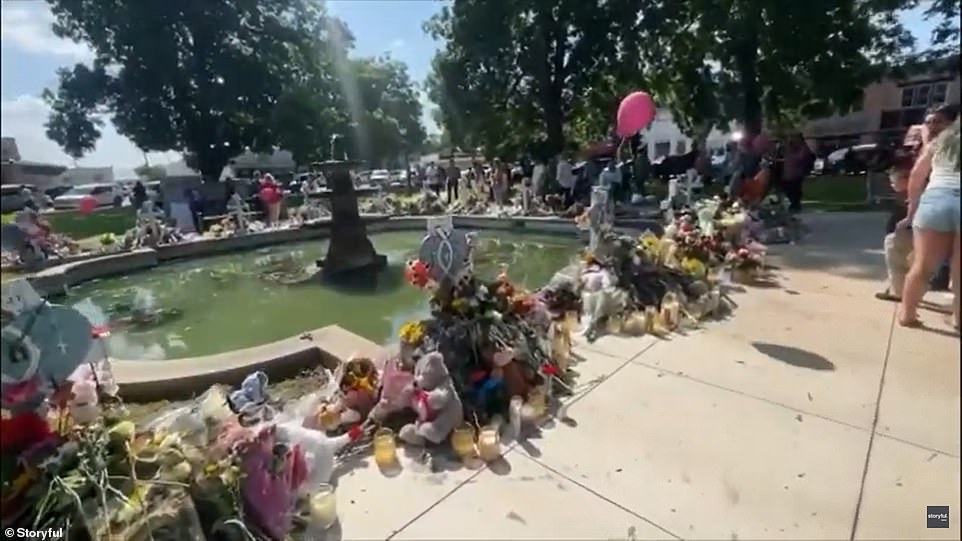 
A crowd of mourners and community members embraced and consoled each other at a memorial service close to the scene of the Texas shooting, where an 18-year-old gunman massacred 19 children and two teachers.

Flowers, balloons, candles and handmade posters were laid by the fountain of the Uvalde town square, just roughly a mile away from Robb Elementary School, on Saturday, as well as 21 crosses in honor of all of the victims.

There was also an outpouring number of community members who were there for those who had lost a loved one from Tuesday’s shooting. It seemed that every local inhabitant knew at least a connection to a victim, as Uvalde only has a population of 16,122 residents.

Al 21 crosses were spread across the fountain. Each of them had a pink balloon tied to the ground. An abundance of flowers were laid down in front of each cross, as well as stuffed animals, heartfelt hand-written messages and candles too.

Blue hearts were also glued to every cross so that friends, family and classmates could honor victims with words of kindness. Furthermore, the name of each victim was seperately engraved on every cross.

One of them read: ‘Our hearts are with Uvalde TX.’

A woman in purple and other mourners observe the memorial site, where 21 crosses were spread out in honor of each victim

An abundance of flowers were laid down in front of each cross, as well as stuffed animals, heartfelt hand-written messages and candles

Two men were seen embracing one another as they observe the memorial site, where hundreds of community members gathered on Saturday afternoon

Some of the other messages promoted an end to gun violence, while others read the names of the victims

A motorcade in support of the shooting victims is pictured on the highway on the way to the small town of 16,000 residents

One of the messages on a pick-up truck read: ‘Our hearts are with Uvalde TX’

The town’s square is usually used as a place where residents meet to grab a bite and enjoy live music and local art or do some late night shopping on every second Friday of the month for an event known as Four Square Fridays.

‘It’s a place where we have gatherings like Four-Square Fridays where we all come out and enjoy good food and music,’ Arianna Diaz, 18, told Border Report.

‘We gathered here once a month… as a town, small businesses here. You come and listen to music. You eat food. You see your fellow community members gathered here so it’s such a tragic event,’ Jaime Cruz, 18, also told the new outlets. ‘This should have never happened,’ he added.

There were also twenty-one empty chairs with the names of every victim taped to them outside of a daycare center nearby.

Another local school, Crossroads Academy High, displayed a message of support over the long weekend with its panel board showing the words: ‘UVALDE STRONG.’

In front of Robb Elementary was another display of 21 crosses with the name of each victim written on them.

There were 21 crosses with the name of each child and teacher engraved on them. They were all laid out in front of the school’s entrance on Saturday, just four days after 18-year-old Salvador Ramos gunned down 21 people on campus

Crossroads Academy High School showed its support towards the families of victims over Memorial Day Weekend, with the words ‘UVALDE STRONG’ written on the main entrance’s white board

Meanwhile, a celebrity who visited Uvalde – his hometown – on Friday to comfort the community left reeling was Texan-native Matthew McConaughey.

The 52-year-old actor visited staff at the Uvalde school district, and was photographed with them inside their building.

McConaughey’s mother Kay, who turned 90 in January and lived with her son throughout the pandemic, was a teacher at St. Philip’s Episcopal School in Uvalde.

Her school, which McConaughey attended, is only a mile from Robb Elementary, where 19 children and two teachers were murdered on Tuesday.

McConaughey did not address the public during his visit, but was accompanied by Republican Representative Tony Gonzalez, who thanked him for coming.

‘Thank you Matthew for helping to heal our community,’ Gonzalez tweeted on Friday.

‘Your visit brought so many smiling faces to Uvalde. See you soon my friend.’

The actor did not address the press, but instead met privately with local people

Earlier, Gonzalez shared photos of McConaughey in the school offices.

‘This week was a solemn reminder that evil exists in the world, but we will never let it break us.

‘We’ll unite to be an even more powerful reminder that love never fails & together we can change things.’

Gonzalez, a staunch defender of the Second Amendment, has previously tweeted with pride about blocking gun control measures.

McConaughey’s own views are more nuanced: while he was weighing up a run for governor, which he called off in November, he was diplomatic about his position.

In March 2018, he addressed the gun control March For Our Lives in Austin, where he lives, and said he supported restrictions on who could buy firearms.

A month later, McConaughey says he supports some gun control but fears the youth-led March For Our Lives movement could be ‘hijacked’ by those hoping to eliminate all guns in the United States.

On Wednesday, McConaughey once again said there needed to be change.

‘As Americans, Texans, mothers and fathers, it’s time we re-evaluate, and renegotiate our wants from our needs,’ the actor said.

‘We have to rearrange our values and find a common ground above this devastating American reality that has tragically become our children’s issue.

‘This is an epidemic we can control, and whichever side of the aisle we may stand on, we all know we can do better. We must do better.’

Meghan Markle, Duchess of Sussex, visits a memorial site in Uvalde, Texas on Thursday, to honor the victims killed in this week’s elementary school shooting

On Thursday, Meghan Markle, the Duchess of Sussex, made a visit to a different memorial site paying tribute to the victims.

Meghan placed white flowers tied with a purple ribbon at a memorial outside the Uvalde County Courthouse. Living in California with her husband Prince Harry and their two children, she took the trip to Texas in a personal capacity as a mother to offer her condolences and support in person to a ‘community experiencing unimaginable grief,’ according to her spokesperson.