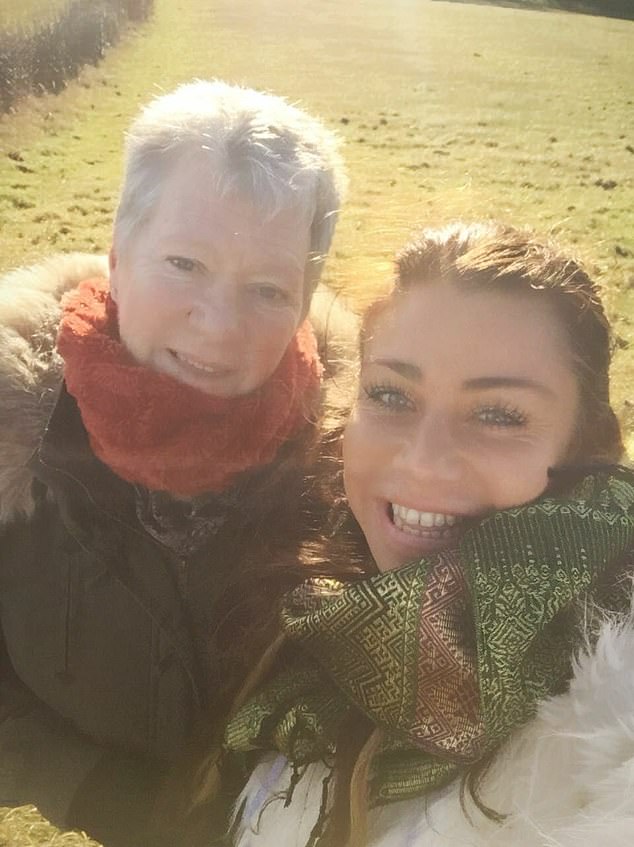 
A rape survivor who inspired a BBC documentary after she helped to jail her sexually abusive running coach tried to escape the horrors of her past by changing her name and starting a new life in Australia.

Katie Shone’s mother, Susan Stothard, wants her beloved daughter to be remembered for her glowing smile, her humour, and her constant efforts to go ‘above and beyond to be a good friend, daughter and sister’.

Speaking to the Daily Mail, Mrs Stothard revealed her daughter ‘put on a front for people’ in the years after she was abused by her coach, Paul North.

North was convicted of multiple counts of sexual assault and one count of rape in 2002 and jailed for ten years.

‘As a child she was so funny and so good at anything sporty, it gave her a good feeling, and he ruined it. He doesn’t even deserve to be mentioned in the same breath as her,’ Mrs Stothard said.

‘She didn’t want to be recognised by the trauma and that’s why I think she never addressed it.’

Katie Shone’s mother, Susan Stothard, wants her beloved daughter to be remembered for her glowing smile, her humour, and her constant efforts to go ‘above and beyond to be a good friend, daughter and sister’

And while she moved to Australia hopeful it would be ‘a land of opportunity,’ Mrs Stothard said eventually ‘the thoughts resurfaced, the trauma and the abuse.

‘That’s definitely why she did what she did. I’m still in shock and I can’t get my head around it.

‘She put her heart and soul into people and things, that’s why everybody loved her, I don’t think she realised how much she was loved.

‘She touched so many people despite the trauma in her life that she always tried so hard to push away.

‘Katie was always remembered for her smile and how she went above and beyond to be a good friend, daughter, sister.’

Mrs Stothard said Katie’s family wanted her to return home to Sheffield when they realised that she was still suffering from her new home in Australia.

‘I knew her inside out, she might have hidden some things from me, but 90 per cent she told me because she knew she could. I knew her pain, I knew her unhappiness.

‘Those things stay in your head and they mess with your mind. We wanted her to come home, we were trying to get her to fly back, but she found that coming home was bringing up too much trauma.’

Now, Mrs Stothard and Katie’s friends have set up a GoFundMe appeal in an attempt to raise the money needed to bring her body home from Australia.

Katie was abused by coach Paul North, who was convicted of multiple counts of sexual assault and one count of rape in 2002 and jailed for ten years.

‘I just get desperate that she’s on her own on the other side of the world. I can’t just get in the car to her. That’s the hard thing.

‘The coroner over there has got such a backlog that they can’t even tell me when she’ll be examined. She’s lost in the system.’

‘She knows why Katie did it, she understands. It’s so hard, I just want to go down the road and see but I can’t because she’s in Australia, I want her home.’

Ms Webster presented Nowhere to Run: Abused by Our Coach for the BBC and was also abused by North.

She paid tribute to her ‘courageous and strong’ friend who was found dead at her home in Australia on Sunday. ‘I’m so sad, hurt & pained to say Katie has sadly passed away, she wrote in a message to her Twitter followers.

Former Sky Sports presenter Charlie Webster (pictured), who presented Nowhere to Run: Abused by Our Coach for the BBC, broke the news of her friend’s death on her Twitter account. Webster was also abused by North

Ms Webster, 40, explained that she and Katie met through being part of the same running club in Sheffield when they were children. She said the pair were best friends at the time, describing the running group as being ‘like a family’.

In 2021, Ms Webster went on to make the hard-hitting documentary about how their respected coach, Paul North, preyed on the young girls – grooming her and her friends and subjecting some of them to horrific sexual assault.

‘Katie is my friend, was part of my running group that I made my BBC documentary Nowhere to Run: Abused by Our Coach about. Katie died by suicide,’ she said.

‘We were so tight-knit, we shared everything, our ups, winning races and smashing personal bests, and our downs, pushing ourselves in training and the pressures our coach put on us,’ Ms Webster wrote on a GoFundMe page set up to help Katie’s mother repatriate her body from Australia.

‘What Katie and I didn’t share, as did none of us at the time, is the sexual abuse we were suffering at the same time, at the hands of our coach.

‘Our coach preyed on us, he manipulated us, and he got in our heads. He created friction in the group, fear and pitted us against each other, all to make sure nobody told anybody what was going on. We were just children,’ Ms Webster wrote.

She said Katie bravely faced North in court, and helped put him behind bars.

In 2021, Charlie Webster went on to make the hard-hitting documentary about how their respected coach, Paul North, preyed on the young girls – grooming her and her friends and subjecting some of them to horrific sexual assault. Pictured: A young Ms Webster with North in a photograph shown in the documentary

Pictured: Webster and Katie’s running club seen in an old photograph that featured in the 2021 BBC documentary

‘She was incredibly courageous, strong and so brave to stand up in court and testify against him. Paul North got 10 years in prison. Katie saved so many other children from being sexually abused by this abhorrent rapist. We know there were girls abused before us but Katie made sure there were none after us.

‘Katie tried to start a new life in Australia, coping the best way she could and fighting every step of the way, she was an incredible and dedicated athlete. Katie achieved an elite level in Muay Thai, CrossFit and yoga through adversity,’ Ms Webster wrote.

‘The thing about the trauma of sexual abuse, it doesn’t just go away. What happened to Katie made her feel worthless like she wasn’t enough, and it impacted her mental health, as is common for all survivors, me including.’

Ms Webster said recently, Katie’s parents had been trying to persuade her to come home to the UK. Now, the athlete’s family have been left ‘utterly distraught’ after ‘Katie’s mum had a knock on her door […] that is every mother’s worst nightmare.’

Now, the broadcaster wrote, ‘she just wants to get her back to lay her to rest’.

‘Katie was a daughter, a sister, an auntie, and a friend – with a cheeky sense of humour, a determined nature and a twinkle in her eye,’ she said.

‘Katie deserved so much better. We want to do everything to honour Katie the way she deserves, to speak her name, live her legacy to continue to help other survivors of abuse, and for Katie to be grieved and celebrated.

‘To show Katie she was and is loved.’

As of Friday, January 13, the GoFundMe page had received over £6,000 of the £5,000 target to get Katie repatriated to the UK, after just one day of being online.

According to archived reports from November 2002, North denied raping a 15-year-old girl three times, and indecently assaulting her nine times.

Reports from the time say his crimes came to light when another member of the running club, also 15 at the time, reported that she had been indecently assaulted by North to her father straight after the incident.

North was sentenced to 10 years for the assaults, which reports said took place over the span of two years, and was set to be placed on the sex offenders register for the rest of his life.

If you have been affected by any of the issues raised by this article, for confidential support call the Samaritans on 116123 or visit a local Samaritans branch, see www.samaritans.org for details.