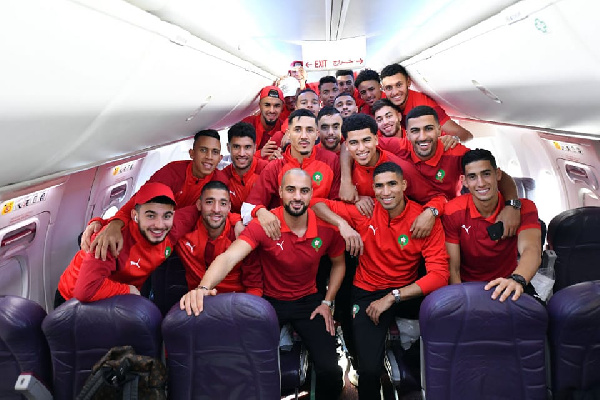 Ghana’s opponent at the upcoming African Cup of Nations, Morocco arrived in Cameroon by making a big statement about their preparedness for the tournament.

Team Morocco ahead of the tournament that kicks off on January 9, 2022, arrived in the Central African nation on Tuesday, January 4, 2021.

According to multiple media reports, the Atlas Lions – as they are known – arrived in Cameroon aboard a Boeing 787 with around 5000 kilograms of cargo on board.

Among other things, the team is reported to have arrived with personal chefs, ingredients for their food, their own water, security detail and matrasses.

It is not directly known what may have prompted the move by the Moroccans but amidst the COVID-19 pandemic, the team is also said to have sterilized the entire hotel where they are lodging.

Additionally, all hotel staff who are to be in close contact with the team have been replaced with their own people.

The team will subsequently play against Gabon and Comoros to end their group fixtures.

Ahead of the tournament, the Black Stars who have been camping in Doha will face Algeria in a friendly encounter at 4:00 pm today.