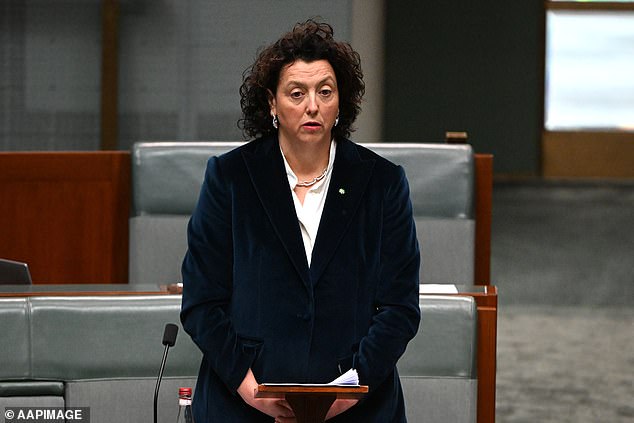 
The doctor turned politician who ousted former treasurer Josh Frydenberg has given her predecessor a solid backhander in her maiden speech.

Monique Ryan defeated Mr Frydenberg in the seat of Kooyong, in southeast Melbourne, at the May 21 election as on of the seven ‘teal’ independents.

Her victory was the first time the Liberal Party lost the blue-ribbon seat in 80 years, which Ms Ryan compared to the devastating floods across Australia.

The former paediatric neurologist first paid tribute to Mr Frydenberg as a ‘well-respected member of this place’ on Thursday, before quickly burning him.

Doctor turned politician Monique Ryan, who ousted former treasurer Josh Frydenberg in Kooyong, has given her predecessor a solid backhander in her maiden speech

Monique Ryan defeated Mr Frydenberg (pictured with his wife Anne at the Mid Winter Ball in 2018) in the seat of Kooyong, in southeast Melbourne, at the May 21 election as on of the seven ‘teal’ independents.

‘Kooyong has always been a seat held by conservative politicians – since it was formed in 1944, the Liberal Party has always held Kooyong,’ she said.

‘The last time an incumbent lost his seat in Kooyong was 1922 – proof positive that not all once-in-a-century events are bad.’

Her ‘once-in-a-century’ reference was presumably to the series of floods NSW and Queensland suffered this year that were often called such events.

‘I hope to honour that legacy by representing the electorate with dedication, integrity and effect. I am the first woman, and the first Independent, to represent this electorate. I will not be the last.’

Ms Ryan was once of seven independents (five of them pictured together in Parliament with Ms Ryan in the centre) who snatched wealthy, inner-city seats that were once Liberal Party strongholds

Ms Ryan was once of seven independents who snatched wealthy, inner-city seats that were once Liberal Party strongholds.

They were funded by multimillionaire Simon Holmes à Court’s Climate 200 campaign on a platform of being pro-business but supporting strong action on climate change.

Ms Ryan spent used much of her speech as a rallying cry for the issue, even quoting Harry Potter character Albus Dumbledore to encourage those of the same view.

‘Happiness can be found even in the darkest of times, when one only remembers to turn on the light.’ she said.

The mother-of-three called climate change ‘the greatest challenge for our generation’ and said she would fight for victims of floods and bushfires.

‘To the rural communities of western NSW and Queensland with farms and towns hit by drought – the people of Kooyong voted for you,’ she said.

‘To the people of Cobargo and Mallacoota and Kangaroo Island, whose homes burned during that black summer – Kooyong voted for you.

‘To the people of Lismore and Woodburn whose houses have this year been inundated again and again by flood, Kooyong voted for you.’

Ms Ryan drew on her experience as a doctor and decorated researcher with 150 published papers to inform her views on climate change.

‘We have lived through a wasted decade of ineffective action on climate change. As a doctor, researcher and scientist, my job has always been to care for children and to protect their futures,’ she said.

‘We stand on the precipice of a great opportunity: A transformation to a new clean energy economy – an economy which will not need to rely on volatile markets and international security for a secure energy supply.

‘An economy away from polluting fuels and combustion vehicles to quiet electric vehicles and clean air for our children. Our renewable energy resources are the envy of the world.

‘We can use these natural advantages to bring down the cost of electricity for households – to protect our elderly neighbours from heatwaves, to ensure Australian families don’t have to decide between heating or food.’

After they were booted from Parliament, the up to 100 activists took their protest to the lawn where Ms Ryan spoke with them and posed for photos.

‘Opening new coal and gas mines? In this economy?’ she wrote on Twitter afterwards.

‘Even if we could put aside dangerous emissions from fossil fuels (we can’t) experts in finance, business and economics warn that any new coal or gas projects will fast become a stranded asset. Clean energy is our economic future.’

Ms Ryan won Kooyong with 52.9 per cent of the vote and deprived the Liberal Party with its expected successor to Scott Morrison, paving the way for Peter Dutton to take over.