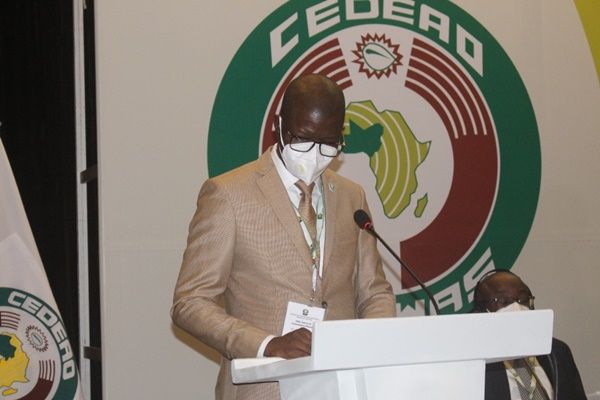 
The Director General of GIABA, Justice Kimelabalou ABA has stated that money laundering and terrorist financing undermined sustainable development by eroding social and human capital in a country.

According to him, the menace poses as a threat to social and political stability causing artificial rise in cost of business and driving away investment.

In a speech read on his behalf at the 13th edition of a forum on ML/FT for youth in Ghana, he emphasized the transnational organised crime, particularly money laundering and terrorist financing, posed serious threats to peace, security and sustainable development in any nation.

“As leaders of tomorrow, improving the capacities and empowering the youth towards leadership positions require concerted efforts both at national and individual levels,” he added.

“It is in recognition of the deleterious impact of these phenomena that GIABA,in its efforts to ensure the involvement of all stakeholders in the fight against money laundering and terrorist financing in West Africa held an Open House Forum in 2009 aimed to sensitize the youths and civil society to their responsibilities and obligations under the Anti-Money Laundering and Counter-Financing of Terrorism (AML/CFT) regime towards fostering and strengthening partnership between GIABA and the youth in the  fight against transnational organized crimes in particular money laundering and terrorist financing in the region.”

“The Open House Forum is one of the awareness and advocacy strategies adopted by GIABA to sensitize stakeholders from ECOWAS member States particularly the youths on the threats of money laundering, financing of terrorism and other crimes to enable them advocate for strong AML/CFT measures in the region. The menace of transnational organised crime in particular, money laundering and terrorist financing, pose serious threats to peace, security and sustainable development in any nation. The outcomes of the past editions of the Open HouseFor a corroborate the need to accelerate the building of capacity of the youths of member States to facilitate their understanding of AML/CFT measures thereby positioning them as advocate of good governance.”

“The promotion of strategic partnerships with the civil society, including the youths and media organizations remains a priority for GIABA within its Regional Strategic Framework.As leaders of tomorrow, improving the capacities and empowering the youths towards leadership positions require concerted efforts geared at enhancing their understanding of the deleterious effects of crimes both at national and individual levels.  Thus, there is the need to engage the youths in the fight against crime and other unwholesome behaviours.”

The Chief Executive Officer of the Financial IntelligenceCentre (FIC), Mr. Kwaku Dua, in his remarks, also said the FIC conducted a money laundering typology study in 2019 and observed that the youth were active players in various schemes.

He mentioned that the role of the young people in the fight against money laundering and terrorist financing is crucial with the country experiencing the recruitment of some students as foreign terrorist fighters.

The Chief Director of the Ministry of Youth and Sports, Alhaji Mohammed Sani Adams, on his part; mentioned ignorance, adventure, culture and cohesion as some of the reasons the youth engaged in crimes.

He said the youth forms 35 percent of the population and if not managed well could be a threat to national security.