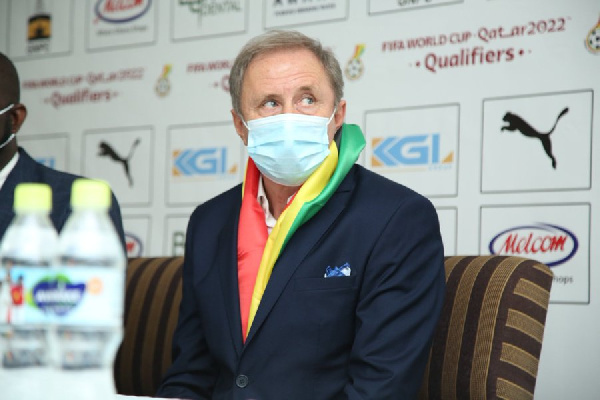 The former Kotoko and Hearts of Oak star comment comes following the Black Stars defeat to Morocco at the 2021 Africa Cup of Nations in Cameroon.

The four-time African Champions lost their game on Monday after a disappointing performance resulted in a 1-0 defeat against favorites Morocco.

Sofiane Boufal scored the game’s only goal in the 83rd minute as Morocco claim another win over the Black Stars.

In an interview with Koforidua-based Bryt FM, the 1963 and 1965 AFCON winner said the Serbian gaffer will not succeed in his second coming with the national as he strongly believes he is a curse to the Black Stars.

“It’s a curse bringing back Milovan Rajevac. In Ghana, a chunk of pastors fancy football so they always pray behind the Black Stars whenever we play”

“In 2010, we defeated Serbia at the World Cup. After the game, Kwasi Appiah went to congratulate Milo but he snubbed him because he is a Serbian. This means, he does not respect God and that is why he is struggling”

“He performed in his first stint because of the prayers from Ghanaian pastors” he said.