Melbourne Cup 2022: Results list, where all horses placed from Gold Trip to Duais to Knights Order 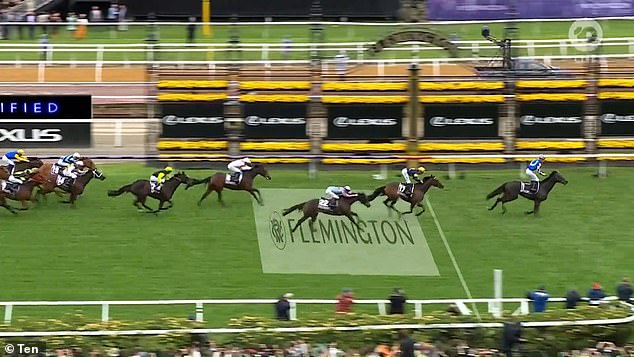 
The results for the 2022 Melbourne Cup are in with the punters’ favourite – Gold Trip – storming to victory.

Gold Trip was flagged by betters as the crowd favourite early in the day.

The classy horse was imported by Europe last year where he’d gained an impressive track record by placing fourth in the Prix de l’Arc de Triomphe.

He was ridden by Mark Zahra, 57.5kg, and trained by Ciaron Maher and Dave Eustace.

The Melbourne Cup was the horse’s longest ever race.

Trained by MD Moroney and ridden by Patrick Moloney, 51.5kg.

Emissary pulled another trick at the Melbourne Cup after winning the last Geelong Cup.

High Emocean was one of betters’ least favourite horses but managed to prove everyone wrong by placing third in the Melbourne Cup.

Trained by Ciaron Maher and Dave Eustace and ridden by Teo Nugent.

The high-rated British horse was trained by James Ferguson and ridden by Kerrin McEvoy, 55kg, on Tuesday.

Deauville Legend impressed with a win at the Voltigeur in his last start and a third in the Cox Plate last week.

Punters were worried that he’d never been tested on damp grounds but the horse impressed nonetheless, coming fourth.

This mare was trained by Anthony and Sam Freedman and ridden by Damien Thornton, 50kg.

Punters had hoped Realm of Flowers would take a win at the Cup last year after a series of placings but the mare fell short and didn’t make it in.

Ridden by Daniel Moor, 53kg, and trained by P Stokes.

Trained by C Maher and D Eustace and ridden by Jamie Kah, 51.5kg.

Ridden by Sam Clipperton, 54kg, and trained by Joseph Pride.

The horse has an impressive history in similar distance races to the Melbourne Cup, placing first in the 3,200m Sydney Cup this April by two lengths.

Ridden by Rachel King, 52.5kg, and trained by Bjorn Baker.

Ridden by Craig Williams, 53.5kg, and trained by Gia Waterhouse and Adrian Bott.

Trained by Simon and Ed Crisford and ridden by William Buick, 55.5kg.

Trained by C Maher and D Eustace and ridden by Harry Coffey, 53kg.

Ridden by Damian Lane, 54kg, and trained by DT O’Brien.

Montefilia was ridden by Jason Collett, 55.5kg, and was looking impressive in the build up to the Melbourne Cup.

Trained by David Payne, the horse had fallen flat in the last Caulfield Cup but began working its way up in the build up for the race.

Many punters decided to take a chance and bet on Montefilia in the hopes he’d step up to the plate.

It was flagged as punters’ second favourite horse to win the Cup.

Trained by Robert Hickmott and ridden by John Allen, 53.5kg.

Trained by Ben and JD Hayes and ridden by Ben Melham, 55kg.