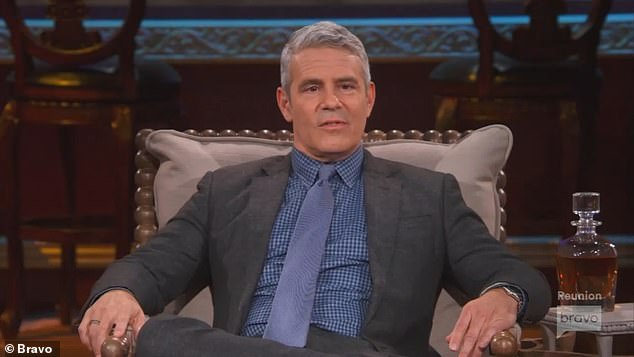 
In one of the least surprising twists in ‘Real Housewives’ history ‘Real Housewives of Salt Lake City’ star Jen Shah pleaded guilty on Monday to a vile $5 million scam to rip off hundreds of elderly and vulnerable Americans.

After proclaiming her innocence for months, Shah withdrew her non-guilty plea, accepted ‘full responsibility’ for conspiracy to commit wire fraud, and agreed to forfeit $6.5 million and pay $9.5 million in restitution.

She faces up to 14 years in prison.

At least one alleged victim, who was not involved in the case against Shah, was a 67-year-old woman named Marie Walker.

Walker told ABC that she paid one of Shah’s shell companies $18,000 for business services and received nothing in return.

If you followed this sordid saga, the outcome was not a total shock.

Shah’s assistant pleaded guilty in November and agreed to testify against her.

What was surprising — in fact, totally shocking — is that Shah is going to keep her day job.

An inside source told People Magazine, ‘It’s a big part of Jen’s story… producers don’t want us to stop following it now. They’ll keep filming with her as long as they can, just like they did with Teresa [Giudice].’

On Tuesday, Cohen (above) couldn’t even bring himself to label Shah guilty.

After proclaiming her innocence for months, Shah (above) withdrew her non-guilty plea, accepted ‘full responsibility’ for conspiracy to commit wire fraud, and agreed to forfeit $6.5 million and pay $9.5 million in restitution

(Giudice from Real Housewives of New Jersey spent 11 months in prison for fraud.)

Well, we know that Shah has no shame, but what about Bravo, not to mention, some of Shah’s co-stars and the executive producer of the Real Housewives franchise, Andy Cohen?

On Tuesday, Cohen couldn’t even bring himself to label Shah guilty.

‘All it means is she’s changing her plea,’ he said on his Sirius XM radio show.

Then, he actually complimented her for sending his daughter a baby gift.

‘Jen Shah, with everything you have going on, that you thought to send Lucy a gift… I just thought that was so nice of her.’

Yeah Andy, she sent you a gift — paid for with other people’s money.

If you haven’t been watching the dramatic three seasons of ‘The Real Housewives of Salt Lake City’ (RHOSLC), Shah and her extremely over-the-top and extravagant lifestyle, outfits and spending are a big part of the show.

She bragged about throwing an $80,000 birthday party for fellow Housewife Meredith Marks in Season 1. And RHOSLC went all-in on Shah’s legal troubles.

Last season showed Shah being tipped off over the phone by an unnamed person that Homeland Security, the NYPD, and the FBI were coming to arrest her as she sat on a party bus en route to a girl’s trip to Vail.

The cameras were there to catch her absolutely shell-shocked expression, as she takes off her mic, lies to everyone that her husband is in the hospital, and bolts off the bus.

It was possibly the most dramatic moment of any Housewife season.

Yet, it was all icky to watch. And it got worse, as she used her platform to proclaim her innocence.

Her tagline last year, as she twirled around in a designer dress, was ‘The only thing I’m guilty of is being Shah-mazing’, making a mockery of any criminal charges against her.

She cried on camera, at lunches, and at the Housewives reunion that she was the victim of a vicious and – wait for it – racist witch hunt.

To their credit, Cohen and some Housewives cast members questioned Shah and her husband (an assistant college football coach) about where she got all her money.

Shah suggested the grilling was racist.

‘I just want to add,’ she snapped back, ‘that I don’t understand why it’s so groundbreaking that Jen, the brown girl, and her Black husband—”How do they get all this money? Oh my gosh, it must be through something illegal.” Why is that the first place that goes?’

She sat there in an ostentatious purple feathered dress and scoffed at any suggestion that she’d done anything wrong.

Instead, she fancied herself a freedom fighter.

‘I’m innocent,’ she declared. ‘I will fight this for every person out there that can’t fight for themselves because they don’t have the resources or the means, so they don’t fight.’

Well, we know that Shah has no shame, but what about Bravo, not to mention, some of Shah’s co-stars and the executive producer of the Real Housewives franchise, Andy Cohen?

Bravo even aired footage of Shah’s sons behind being led out of their home after her arrest.

Shah admitted she gave the producers the footage, in another obvious attempt at manipulation.

‘I feel like it’s important for people to see that it doesn’t matter if you live in a gated community in Park City,’ she said. ‘It doesn’t matter what you have. We’re in 2022 and this is still happening. These are how my boys were treated.’

It was utterly shameless and sociopathic behavior, and I never for one second believed her to be innocent.

As a longtime Housewife viewer, I became more and more uncomfortable watching someone use Bravo’s platform to proclaim her innocence about something that there was almost a 100% likelihood she did, in fact, do.

The U.S. Attorney for the Southern District of New York who was charged her has a 95% conviction rate.

Quite frankly, it was an exercise in absurdity to entertain the idea that Shah hadn’t committed these heinous crimes.

And yet, that is exactly what happened.

Many of her cast members defended her (but not all, including her one-time friend Lisa Barlow) and made excuses.

‘I live in the United States of America… In the US, one has a right to a trial and presumed innocent until proven guilty.’

OK, I can’t argue with that. But what does Marks have to say now?

Shah was very savvy in using the Bravo platform to try and win her case in the court of public opinion and tarnish her critics with suggestions of racism.

But now the gig is up. She has admitted her guilt. She should be fired from the show and roundly condemned.

But that’s apparently not happening, which brings me to my final gripe with Bravo.

Their obvious, glaring double standard when it comes to their casting decisions.

People have been fired for much less from RHOSLC — like for being a Trump supporter and holding the ‘wrong’ opinions.

Jennie was promptly fired and raked over the coals publicly.

Shah herself came out publicly and called Jennie’s apology ‘disingenuous’.

Where’s the immediate suspension and condemnation?

The silence is deafening.

Apparently, according to some television executives, offensive posts are a more immoral act than ripping off the elderly and vulnerable.

Shah has now pleaded guilty to a Bernie Madoff-style crime that preyed on the naive.

She should not be afforded the opportunity to shrewdly manipulate the Bravo cameras and audience once again, which is exactly what she will do.

The Jen Shah’s of the world should not continue to be rewarded with giant platforms and enjoy lifestyles funded by the hard-earned money of good people.

Bravo should set an example here and do the right thing.

Even in the world of vapid reality television, there should be some set of standards.

As for Jen Shah, I hope she goes to jail for a long time and her victims are somehow paid back the money they are owed.

I am certain RHOSLC can find some other dramatic, over-the-top women who are not aspiring felons.