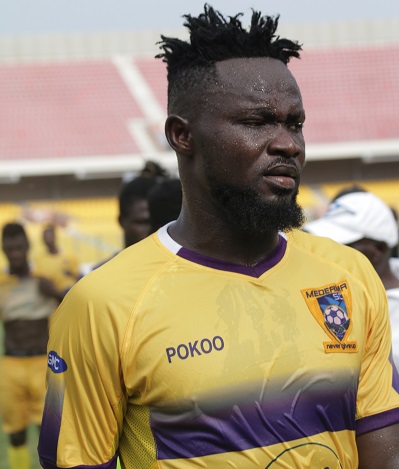 
Accra Hearts of Oak suffered a 1-0 away defeat to Medeama SC in their match day six outstanding fixture of the Ghana Premier League (GPL) at the Tarkwa Akoon Park, yesterday.

Former Hearts of Oak defender, Vincent Atinga stepped up to convert from the spot in the 82nd minute to end the Phobians’ six games unbeaten run.

A fairly balanced game in the early stages saw Hearts go close through forward Kwadjo Obeng Junior when he latched on a pass from Daniel Afriyie Barnieh but his shot missed target.

Minutes later, goalkeeper Richard Ayi was called to duty with a brilliant one-on-one save to deny Medeama’s Prince Opoku Agyeman the opener.

In the 30th minute, the game was halted by the referee following chaotic scenes from a section of the fans.

Hearts brought on Enoch Asubonteng and Salim Adams for Isaac Mensah and GladsonAwako, respectively and kept their composure despite pressure from Medeama after 66 minutes of action.

In the 82nd minute, Vincent Atinga scored from the spot kick to hand Medeama the lead after Ahmed Toure was brought down in Hearts goal area.

Hearts were reduced to 10-men when Kwadwo Obeng Junior was shown the red card later in the game.