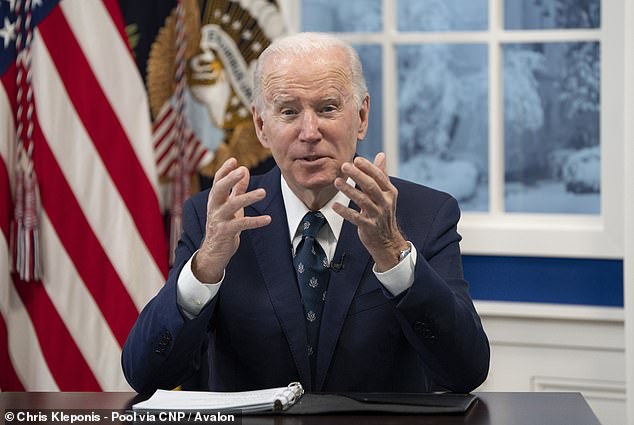 
Meat industries tore into President Biden for his plan to tackle high prices in the grocery store, saying that it is a ‘solution searching for a problem.’

‘While we haven’t seen any proposals, for the chicken industry, this looks like a solution in search of a problem,’ National Chicken Council President Mike Brown said in a statement.

‘The chicken industry is the least consolidated in all of animal agriculture, and the market share of the top four companies has been virtually the same for the past 20 years.’

‘It’s time for The White House to stop playing chicken with our food system and stop using the meat industry as a scapegoat for the significant challenges facing our economy. This administration should be looking at the chicken industry as a model of success, instead of creating a boogeyman to justify an unnecessary and expensive foray into our meat supply.’

The National Chicken Council tore into President Biden for his plan to tackle high prices in the meat industry, saying that it is a ‘solution searching for a problem’

‘While we haven’t seen any proposals, for the chicken industry, this looks like a solution in search of a problem,’ National Chicken Council President Mike Brown said in a statement

The Consumer Price Index rose 6.8% in November over last year, the fastest increase in 39 years. The cost of bacon is up 21% and the price of beef, 25%. The index for meat, poultry, fish and eggs is up 16% from November last year, according to the Bureau of Labor Statistics.

The White House noted in a release on Monday that four large companies control 85% of the beef market, four processing firms control 54% of the poultry market and four firms control 70% of the pork market.

The North American Meat Institute said the president’s ‘tired approach’ would do little to tackle inflation, as Biden fails to acknowledge staff shortages.

‘For the third time in six months, President Joe Biden and his Administration announced the same plans to spend $1 billion to fund government intervention in the market in an attempt to increase prices livestock producers receive while blaming inflation on private industry,’ said Julie Anna Potts, President and CEO of the North American Meat Institute.

‘The Biden Administration continues to ignore the number one challenge to meat and poultry production: labor shortages. This tired approach is not surprising because they have refused to engage with the packing and processing sector they attack, going so far as to hold a roundtable on meat packing without a single beef or pork packer present.’

‘Press conferences and using taxpayer dollars to establish government-sponsored packing and processing plants will not do anything to address the lack of labor at meat and poultry plants and spiking inflation across the economy,’ said Potts.

‘The Administration wants the American people to believe that the meat and poultry industry is unique and not experiencing the same problems causing inflation across the economy, like increased input costs, increased energy costs, labor shortages and transportation challenges. Consumers know better.’

‘Our farmers and ranchers have to pay whatever these four big companies say that have to pay by and large, but that’s only the half of it. These companies can use their position as a middleman to overcharge grocery stores and ultimately families,’ Biden said.

‘In far too many industries, a handful of giant companies dominate the market.. And too often they use their power to squeeze out smaller competitors and stifle new entrepreneurs.’

‘I’ve said it before and I’ll say it again – capitalism without competition isn’t capitalism, it’s exploitation. That’s what we’re seeing in meat and poultry.’

The president noted that farmers and ranchers make far less for their share of the product than in years past.

‘Fifty years ago, ranchers got over 60 cents of every dollar a family spent on beef. Today, they get about 39 cents. Fifty years ago, hog farmers got 40 to 50 cents for each dollar they spent. Today, it’s about 19 cents,’ Biden said.

The American Association of Meat Processors welcomed the investment.

‘We welcome the investment in independent meat processors. The investment will give small meat processors the ability to increase their capacity for harvest and processing by building much-needed production space, purchasing automated equipment, and investing in workforce development.’

The White House said that meat and poultry prices are the biggest contributors to the rising cost of food at the grocery store.

Of the $ 1 billion allocation, $100 million will go to reduce the cost of inspections for small processing facilities. Another $100 million is going to address supply chain challenges like cold storage and warehousing.

Another $800 million will go to grants and loans for smaller facilities.

The Biden administration is also tightening restrictions for what can be labeled ‘Product of USA.’ Under current labeling rules, meat products need only be packed in the U.S., and could be raised overseas but still labeled as an American product. It will issue stronger rules to combat ‘abuses’ by meat processors and the Department of Justice and Department of Agriculture will launch a new portal for whistleblowers to report potential violations of competition laws.

The Biden administration has long blamed the meat industry for rising prices at the grocery store and taken step to combat illegal price fixing.

Share. Facebook Twitter Pinterest LinkedIn Tumblr Email
Previous ArticlePremarket stocks: Apple’s warp-speed journey to $3 trillion
Next Article A Rich Man Slept With My Wife, I Will do same to others now that I have Money – Singer Portable (WATCH VIDEO)