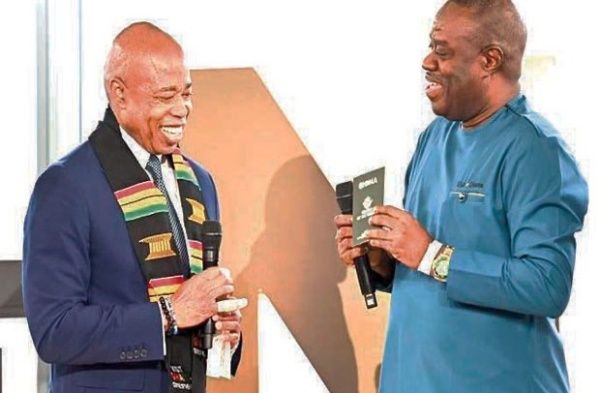 
The Mayor of New York, Mr. Eric Adams, has expressed his determination to support Ghana’s tourism drive aimed at making the country the tourism hub of Africa.

In this regard, the Ministry of Tourism, Arts and Culture and the Office of the New York Mayor will work out joint strategies to achieve the desired results.

Mr. Adams was speaking after the conferment of the title of tourism ambassador bestowed on him by the Minister of Tourism, Arts and Culture, Dr. Ibrahim Mohammed Awal, in New York at the weekend on the sideline of a Global Citizen Prize and Summit.

Mr. Adams expressed his readiness to help increase the number of tourists from New York in particular, and the United States in general to Ghana, adding that Ghana has all the attractions to enhance international tourism.

Dr. Awal, on his part, stated that America is the biggest source of international arrivals to Ghana, accounting for about 30% of all tourists over the years.

He said his ministry’s goal is to attract two million international tourists to Ghana annually from 2024, and added that the support from the New York Mayor would help achieve this objective.

He also congratulated Mr. Adams for being the second black mayor of New York.