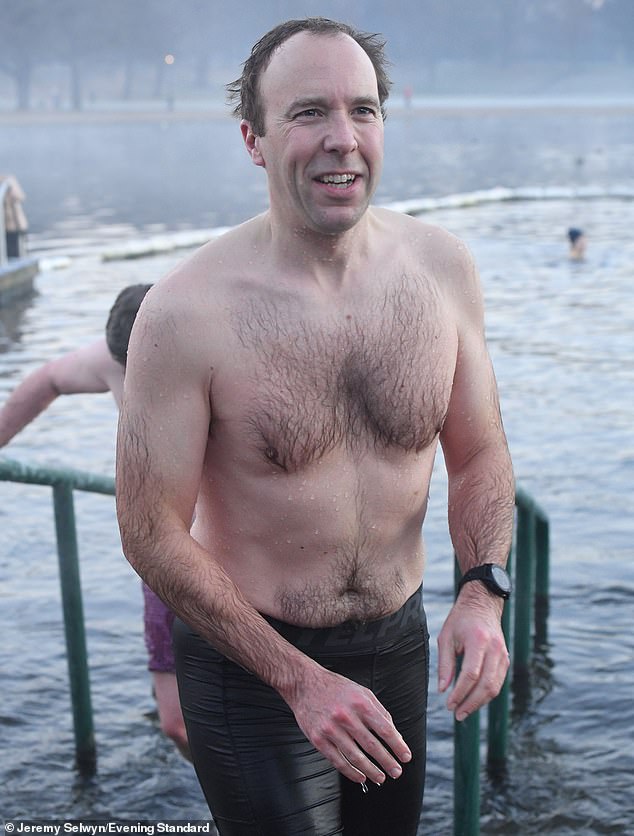 
Matt Hancock is heading to the Australian jungle after signing up for I’m A Celebrity, it emerged today.

The MP, who quit as Health Secretary after cheating on his wife during the pandemic with his long-term aide Gina Coladangelo, will become the 12th celebrity heading into the jungle.

After playing a central role in coordinating the government’s response to Covid, Mr Hancock’s political career has flagged of late, and last week he was brutally snubbed by Rishi Sunak after the new PM dodged his attempt at a greeting outside Tory HQ.

Matt Hancock, who quit as Health Secretary after cheating on his wife during the pandemic with his long-term aide Gina Coladangelo, will be joining I’m A Celebrity

The MP for West Suffolk will become the 12th celebrity heading into the jungle, it emerged today

An insider told The Sun: ‘Matt is a sensational signing for the show as producers love a star with a story to tell – and they always hope they’ll spill the beans round the campfire.

‘He’s the latest in a long line of figures from the political sphere, including MP Nadine Dorries, Stanley Johnson and MP Lembit Opik.

‘There’s been a question mark over who the twelfth campmate would be, partly because negotiations over Matt going in were so top secret. It seems Matt was a last-minute signing.’

Matt Hancock was accused of breaking the government’s coronavirus drinking curfew by continuing to consume alcohol in a House of Commons bar after 10pm.

A senior Tory MP had told the Mail on Sunday that Mr Hancock remained in the Smoking Room bar until at least 10.25pm on a Monday in October.

It was reported he arrived at the bar just before a 9.40pm vote, ordered a glass of white wine and joked: ‘The drinks are on me – but Public Health England are in charge of the payment methodology so I will not be paying anything.’

However Mr Hancock’s spokesman later insisted the minister had not broken curfew rules and that the ‘proposed timeline of events is false’.

A senior Tory MP who saw him there insisted: ‘I stand 100 per cent by my story. I know what I saw, and when.’ But the Health Secretary refused 30 times to say whether he returned to the Commons Smoking Room bar after the vote.

Matt Hancock built a social network called ‘Matt Hancock MP’, with the aim of allowing him to communicate with people within his West Suffolk constituency.

But users logging in area greeted by an introductory video of Mr Hancock and system alerts that ‘Matt Hancock would like to access your photos’.

There were concerns among some Apple users that the message suggested their privacy had been compromised, although the app does ask for permissions first.

It also adds: ‘Matt Hancock would like to access your camera’ – while on the Android version the message ‘Matt Hancock keeps stopping’ was displayed to some users.

Matt Hancock criticised a woman Labour MP working on the NHS frontline after he told her to watch her ‘tone’ during a debate in the House of Commons.

Shadow health minister Dr Rosena Allin-Khan, who has been working in A&E during the crisis, had asked him about a failure to test frontline workers for Covid-19.

The Health Secretary told the MP for Tooting, South London, to ‘take a leaf out of the shadow secretary of state’s book in terms of tone’.

But she defended her tone, and ex-Labour deputy Harriet Harman said: ‘Something creepy about a man telling a woman to watch her tone! Worse that he recommends she adopts the tone of another man. I suggest Matt Hancock changes his.’

Matt Hancock was ambushed by an ITV reporter in the street in London who asked him why he wouldn’t speak to Piers Morgan on Good Morning Britain.

Reporter Nick Dixon spoke to the Health Secretary outside BBC Broadcasting House last month to initially ask about the coronavirus vaccine which was being tested.

But the journalist then asked if Mr Hancock would sit down for an interview on GMB and insisted he would clear the schedule for the Health Secretary the following day.

Mr Hancock awkwardly replied: ‘That’s very kind of you, unfortunately I have got something in the diary tomorrow and I’ve got an awful lot of work to do to get this vaccine rolled out.’

The politician then walked away towards the BBC building as Mr Dixon continued to ask him questions, while Morgan and Susanna Reid laughed in the studio.

Matt Hancock claimed he may have had ‘Harry Potter on the mind’ when he accidentally congratulated ‘Daniel Rashford’ for his efforts on free school meals.

Manchester United striker Marcus Rashford brought about a change in policy after a campaign to extend the children’s food voucher scheme into the summer holidays.

But denying the government had made a U-turn, Mr Hancock told Sky News: ‘Righty-ho, I will tell you what happened. The prime minister talked to Daniel Rashford, he considered it and made his decision – I think it’s terrific.’

He later told LBC that his child’s fondness for the JK Rowling books may have been to blame for the mistake. The boy wizard was played by Daniel Radcliffe in the films.

Rashford saw the funny side, responding on Twitter by saying: ‘I’ve been called much worse over the last couple of days’ with a laughing face emoji.’

Matt Hancock attempted to pull off the ‘moonwalk’ dance move while he was culture secretary at the opening of a Michael Jackson exhibition.

Mr Hancock was shown the move at the MJ On The Wall event by National Portrait Gallery director Nick Cullinan in London in June 2018.

But one social media user replied to the video: ‘Is this for real or a VR experience that convinces dads they can dance?’

Another said: ‘Every day should feature a video of Matt Hancock dancing.’

Culture Secretary Matt Hancock once posted a video of him trying out parkour by jumping off concrete blocks on the Southbank in London.

He said: ‘I’ve seen it on YouTube and it’s amazing but you never think you get involved because I can’t do those sort of flips, but it’s great fun and good exercise and you learn about your body and the environment you live in. Anyone can do it.’

But the idea of him attempting the quick training discipline did not go down well with many social media users, with one saying: ‘That was embarrassing.’

Another added: ‘If you actually have a PR and media adviser and they told you that was a really good idea, fire them. ‘

Others suggested he had ‘gone full Partridge’ and made reference to the episode of The Office in the US where Michael Scott’s staff try the exercise and shout ‘Parkour!’

Matt Hancock was criticised for awkwardly standing very close to a Conservative parliamentary candidate outside a hospital in Warrington.

Social media users said he was a ‘golden retriever in disguise’ and ‘weird’ after a video showed him standing side by side with Ms Maisey and facing her as she spoke.

She said: ‘It’s been absolutely fantastic being here this morning with Matt Hancock’ – before gesturing to her left and then taking a step away from the Health Secretary.

Ms Maisey was standing for Warrington North for the Tories and tweeted the clip of them standing outside the Warrington and Halton Hospitals NHS Foundation Trust.

She lost the election days later to Labour’s Charlotte Nichols who received 20,611 votes compared to her 19,102.

One of Matt Hancock’s most cringeworthy moments saw him singing Queen’s ‘Don’t Stop Me Now’ during a karaoke session at the Conservative party conference.

The video from October 2017 saw the then-culture secretary sang the hit very badly alongside Thérèse Coffey, who is now the Work and Pensions Secretary.

It resurfaced in September when Good Morning Britain host Piers Morgan played the clip, saying it was ‘one of the single most horrific videos, possibly ever recorded.’

Another added: ‘This is exactly how I imagined Matt Hancock to do karaoke.’

Matt Hancock cried on live TV today after a grandmother and a man called William Shakespeare became the world’s first people to get an approved Covid-19 vaccine.

The Health Secretary said he was emotional as he watched Margaret Keenan, 90, getting the jab this morning after a grim 2020, and cried on Good Morning Britain.

Mr Hancock wiped away tears as he told Piers Morgan and Susanna Reid: ‘It’s been such a tough year for so many people and there’s William Shakespeare putting it simply for everybody that we can get on with our lives’.

But he was criticised for the moment on Twitter, with one user saying: ‘Matt Hancock to appear on Hollyoaks after showcasing these acting skills.’

Another added: ‘Matt Hancock fake crying on Good Morning Britain has to be one if the most cringeworthy pieces of television I have ever witnessed.’

Share. Facebook Twitter Pinterest LinkedIn Tumblr Email
Previous ArticleThe US spent half a trillion dollars last year alone financing its mountain of debt
Next Article Moment a suicidal man was rescued from jumping off a bridge in Lagos (video)