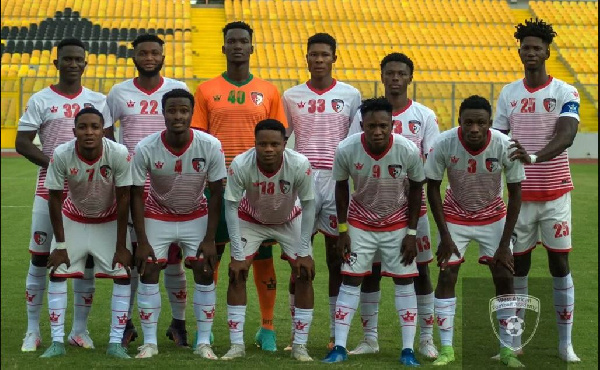 WAFA showed glimpses of their old form after beating Elmina Sharks 2-0 at home on Sunday, 2 January 2022 in the Ghana Premier League.

The Academy Boys were lacking goals in recent matches despite dominating opponents, especially at home.

But on Sunday, they dug deep and managed to bag the points against the league’s basement boys.

The Academy Boys opened the scoring on the stroke of halftime when striker Justus Torsutsey converted a spot-kick.

This was after Sampson Agyapong’s goal-bound attempt came off the hand of a Sharks defender.

Six minutes into the break, WAFA doubled their lead through Agyapong who went on a solo run.

The No.10 collected a pass from Emmanuel Agyemang Ofori and entered the box before nutmegging the goalkeeper.

Sharks did not go down easily and were competitive but were denied by some brave goalkeeping from Boliver Sarfo.

The WAFA goalkeeper was really on top of his game and had to stop a 90th-minute penalty to deny Tahir Mensah.