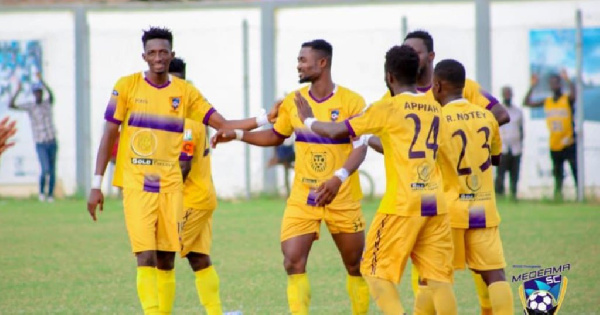 
A very late goal gave Medeama SC their first away victory in the Ghana Premier League this campaign on Monday as they beat AshantiGold SC at the Len Clay Stadium in Obuasi.

AshantiGold trainer Thomas Duah made five changes to the team that lost 1-0 to Berekum Chelsea in the last round with Stephen Owusu Banahene coming back from suspension.

Fatawu Sulemana came in for Benjamin Abaidoo at the left-back position whereas Kwasi Donsu replaced Godfred Abban in midfield.

AshantiGold failed to make their slight dominance over Medeama count in goals in the first half as they couldn’t create scoring opportunities.

The first real threat on goal fell the way of the Miners in the 56th minute but Kofi Nkrumah’s shot from close range went wide.

Ashia came close to getting the opening goal for AshantiGold unfortunately his effort from the edge of the box was brilliantly saved by goalkeeper Boris Junior Mandjui.

AshantiGold were denied from getting the breakthrough in the 74th minute after defender Ali Ouattara Issouf made a goal-line clearance to prevent Mark Agyekum’s effort to hit the back of the net.

The Mauve and Yellows nicked the maximum points in the additional minutes when substitute Ackahbi scored the match winner to the break AshantiGold’s fans hearts.

The Miners will be a short trip to Kumasi to take on Asante Kotoko SC in the Ashanti Derby in the next round.