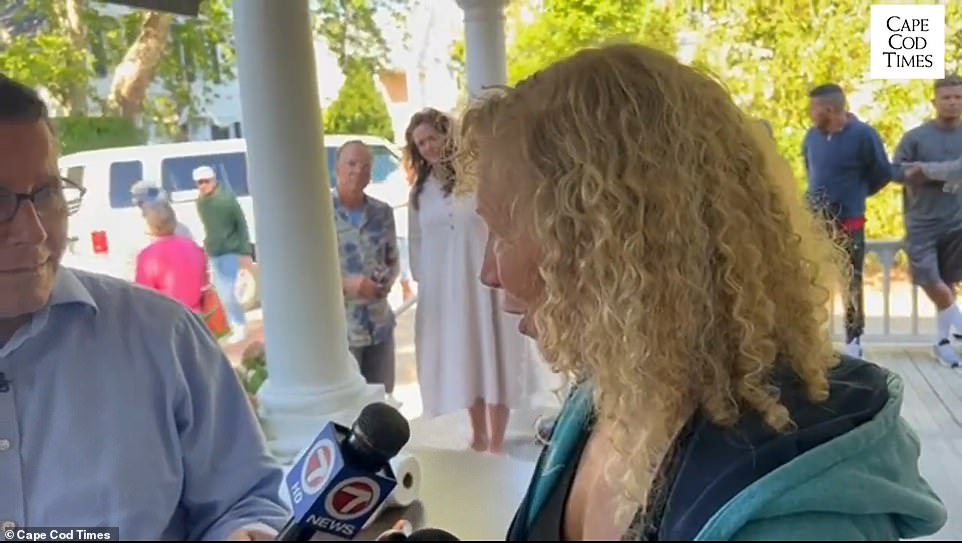 
A woke homelessness director in Martha’s Vineyard has brazenly claimed that the 50 migrants flown in by Gov DeSantis will have to move somewhere else because there is ‘no room’ on the billionaire enclave.

DeSantis flew in 50 migrants on two planes to affluent Martha’s Vineyard Island, off the coast of Massachusetts, on Wednesday, sparking a meltdown from the liberal leadership on the island – activating its hurricane protocols.

Lisa Belcastro claims that the island is facing a shortage of affordable housing, with the median home price at about $1 million.

She told reporters that at ‘some point they have to move somewhere else’, because the island is suffering from a ‘housing crisis’.

Nearly 1,000 migrants have been released to sleep on the streets Texas border town of El Paso. amid a surge of illegal crossings that is overwhelming Border Patrol facilities.

Republicans have stepped up their attacks on the Biden administration as they try to make immigration the theme of November’s midterm elections.

Lt. Gov Jeanette Nunez has now declared that DeSantis’ administration is planning to send any illegal migrants from Florida to Delaware.

Lisa Belcastro claims that the island is facing a shortage of affordable housing, with the median home price at about $1 million. She told reporters that at ‘some point they have to move somewhere else’, because the island is suffering from a ‘housing crisis’

DeSantis sent two planes of 50 migrants to the affluent island yesterday, and is now threatening to send more to Delaware – following in the ‘blueprint’ of Texas Gov Greg Abbott

When asked about the historic wave of Cuban migration to South Florida, Nunez told WURN: ‘That’s why the governor has worked with the legislature, to secure funding to make sure…that people that are coming illegally…that they don’t stay here with their arms crossed, thinking about what they will be able to do.

‘We are going to send that person, frankly, to Delaware, the president’s home state.

‘This is going to be worse than Mariel, worse than everything that happened when we saw the impact of the ‘80s and to do nothing is not an option.’

Speaking on Thursday DaSantis accused critics of his move to fly migrants to Martha’s Vineyard of ‘virtue signaling’, saying their concern for the welfare of the migrants was a ‘fraud’.

He said: ‘The minute even a small fraction of what those border towns deal with every day is brought to their front door, they go berserk, and they’re so upset that this is happening.’

It comes after Gov Greg Abbott sent 101 of illegal migrants outside of VP Kalama Harris’ home in Washington DC yesterday – just days after she declared that the border was ‘secure’.

Harris declared on Sunday that the border is ‘secure’ in an interview and has now found herself in the midst of an attack by Gov Greg Abbott against Democrat immigration rules.

She yesterday refused to answer questions about the sensational escalation, as Abbott continues his campaign against so called ‘sanctuary cities’.

‘It is open because we enter. We come in free, no problem. We came illegally, not legally.’

Gov Abbott appears to have directly retaliated to Harris’ comments, by sending the latest load of migrants close to her home in DC

President Biden yesterday branded the republican governors as ‘unAmerican’ for the way they were playing political games with migrants.

Ron DeSantis, governor of Florida, is seen on Thursday defending his role in flying migrants to Martha’s Vineyard saying his critics concern for the welfare of the migrants was a ‘fraud’

Migrants in Eagle Pass, 450 miles east along the border, were also reported to have killed a guard dog and begun eating animals in desperation

Abbott has bussed in thousands of migrants who crossed the border into Texas from Mexico to New York, Washington DC and Chicago in the past few months.

President Biden yesterday branded the republican governors as ‘unAmerican’ for the way they were playing political games with migrants.

Both Charlie Crist and Nikki Fried, who are looking to oust DeSantis from his role in November, slammed the comments made by his administration.

Crist said: ‘Gov. DeSantis’s proposal to forcibly transport Cuban refugees out of Florida is reckless, inhumane and a betrayal of our deepest values as Americans.

‘They deserve better than to be treated as his political pawns to curry favor with the extremist base of the Republican Party.’

Fried added: ‘Wildly inappropriate words from Ron DeSantis’ LG. Fleeing communism and tyranny to a state rich with family and culture only to be deported north by bus is cruel and wrong.’

A spokesman for DeSantis’ office took credit for flying the two planes into affluent Martha’s Vineyard – which is home to the Obamas, Oprah and Larry David.

They said: ‘States like Massachusetts, New York and California will better facilitate the care of these individuals who they have invited into our country by incentivizing illegal immigration through their designation as “sanctuary states” and support for the Biden administration’s open border policies.’

The Del Rio section of the border, which includes Eagle Pass, has doubled its number of migrant encounters from the previous year to over 376,000 since October 2021

Keith Chatinover, a Democrat county commissioner for the area, made comments previously that he would ‘love’ to make the area a ‘haven’ for immigrants.

His comments came in response to Sen Ted Cruz’s pushing a bill for Democrat-led areas to become post of entry for processing migrants.

But he now appears unhappy at having his wish granted, and has retweeted attacks against the Florida governor of being a fascist and human trafficker for sending migrants to the billionaires’ enclave.

He told the MVTimes in October 2021: ‘I would love Martha’s Vineyard to become a haven for new immigrants to this country, but Senator Cruz has no idea what he’s talking about regarding a ‘border crisis.’

But now he is being called out for the comments, after branding DeSantis a ‘fascist’ for escalating the immigration war with Democrat-run areas.

Cruz tweeted that he was ‘confused’ over Chatinover slamming DeSantis for flying the illegal immigrants into the area.

Chatinover tweeted that he does ‘support refugee resettlement’ but has an issue when they are not given ‘advance notice’ to ‘adequately help’ the migrants.

He added that the chaos of the situation for the Republicans to ‘prove a point’ was a ‘blatant disregard’ for human rights.

Chatinover retweeted someone else who called DeSantis ‘fascist scum’ who said he should be ‘prosecuted for human trafficking.’

Gavin Newsom, the governor of California, wrote to the Department of Justice to request that DeSantis be investigated for kidnapping.

In a letter to Merrick Garland, the attorney general, he said he was ‘horrified at the images of migrants being shipped on buses and planes across the country to be used as political props.’

Nearly 100 migrants arrived in Washington DC on Thursday morning from Texas, close to the Vice Presidents home by the Naval Observatory

Keith Chatinover, a county commissioner for Martha’s Island, made the comments in response to Sen Ted Cruz’s pushing a bill for Democrat-led areas to become post of entry for processing migrants

DeSantis flew in the two planes without giving any warning, sparking criticism from Democrats – including New York Mayor Eric Adams

School buses were used to get the group of migrants, mostly from Venezuela, to the church that provided shelter

He wrote: ‘I urge US DOJ to investigate whether the alleged fraudulent inducement would support charges of kidnapping under relevant state laws, which could serve as a predicate offense for charges under the Racketeer Influenced and Corrupt Organization (RICO) provisions of the Organized Crime Control Act.’

Other Democrats have slammed the ‘Republican blueprint’ of sending migrants to other cities with little warning, with New York Mayor Eric Adams slamming it as ‘inhumane’ and branding Abbott as a ‘rogue’ Governor.

On Wednesday, Adams admitted that shelters in the Big Apple are at ‘breaking point’ after the Texas Gov bused nearly 11,000 people into the city.

Abbott recently clashed with Chicago Mayor Lori Lightfoot over the decision, with Lightfoot branding him as a ‘racist’.

She sparked outrage last week after deciding to move migrants from Chicago to a neighboring Republican suburb.

Of the 147 migrants who arrived last Wednesday, Lightfoot ordered 64 of them to be taken to a Hampton Inn hotel in Burr Ridge, where they will be housed for at least the next 30 days.

Mayor Muriel Bowser, of Washington DC, last week declared a public emergency over the buses continuing to arrive from Texas and Arizona.

It will set aside funding to accommodate migrants as well as create the Office of Migrant Services (OMS).

The OMS will provide temporary accommodation, urgent medical needs, transportation and other services for those arriving.

Gavin Newsom, the governor of California, said that DeSantis should be investigated for kidnapping and wrote a letter to the DOJ

Many migrants who arrived from Venezuela, Uruguay, Colombia and Mexico told Fox News that they thought the border was open

Bowser has twice asked that the National guard be activated to assist with the thousands of migrants arriving at the capital, but they have both been denied by the Pentagon.

Brianne Nadeau, a member of the Council of the District of Columbia, has slammed the governors of Texas and Arizona for the city’s public migrant emergency.

At the same time as these new arrivals, humanitarian crisis is deepening in the Texas border town of El Paso.

Nearly 1,000 migrants have been released to sleep on the streets amid a surge of illegal crossings that is overwhelming Border Patrol facilities.

Border Patrol facilities and shelters in the west Texas town have been overwhelmed in recent days, leading to a flood of so-called ‘street releases’.

Congressman Tony Gonzalez, a GOP US Representative, said: ‘We’ve never seen anything like this. It’s a scene that you would see in a third-world country, not in the streets of El Paso.’

It has led to scenes of misery, with hundreds of migrants sleeping on the streets without access to toilets or showers, and residents say that the ‘smell of human waste is overwhelming in the area.’

The situation in El Paso comes after the Biden administration officially extended special protections for Venezuelans, known as Temporary Protected Status, that shield some of them from deportation.

Migrants in Eagle Pass, 450 miles east along the border, were also  reported to have killed a guard dog and begun eating animals in desperation.

Just shy of 200,000 illegal immigrants were intercepted crossing the southern border in July, according to the most recent CBP figures available.