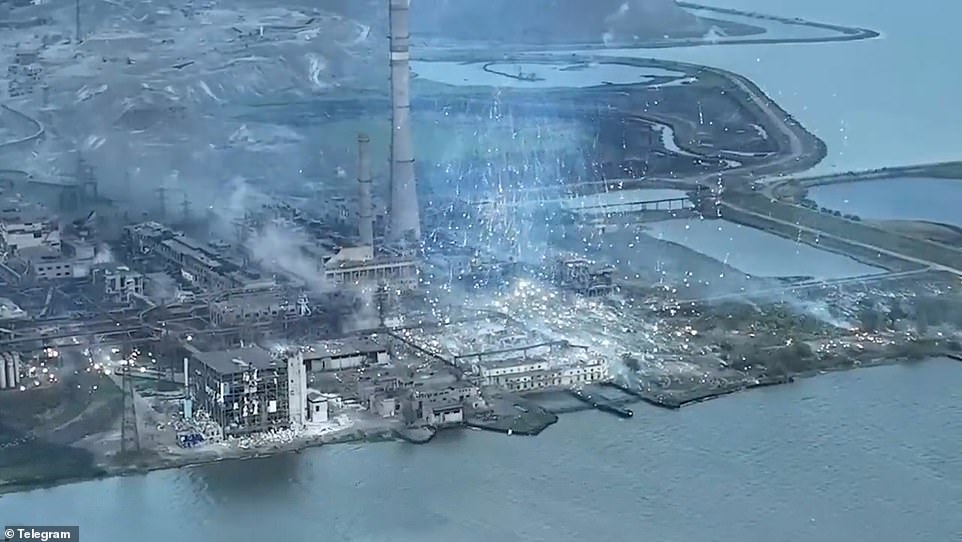 
Ukraine accused Russian forces of dropping phosphorus bombs on Mariupol‘s Azovstal steel plant on Sunday, as the families of the fighters trapped in the sprawling complex said they fear their fight is coming to an end.

An aerial video posted to social media on Sunday showed the attack on the plant, where Ukrainian soldiers have been making a final stand against the Russian onslaught on the port city that has been all-but reduced to rubble.

After weeks of Russian siege and bombardment, Mariupol – found in Ukraine’s eastern Donbas region – is in Russian hands, but hundreds of Ukrainian fighters are holding out under heavy fire at the steel works.

A number of civilians who were sheltering in the plant were evacuated this month with the help of the International Committee of the Red Cross and the UN.

The footage of the attack begins with an aerial view of the vast Azovstal plant, when suddenly a Russian missile detonates in mid-air – releasing a fiery burst over the already heavily damaged factory buildings below.

Pictured: Russian Incendiary munitions fall over the vast Azovstal steel plant in Mariupol, in a terrifying video posted to social media on Sunday showing the scale of the damage that has been done to the vast coastal complex

A burst of fiery ‘sparks’ is shown over the plant a split second after a Russian missile detonated above the steel works, raining incendiary munitions down onto the factory

More of the bursts are seen above the factory, where Ukrainian soldiers are making a final stand against Russia’s onslaught of Mariupol. Hundreds of flaming munitions fall the ground

‘Sparks’ – which are actually a grouping of incendiary munitions – fall to the ground and ignite. From a distance, the explosions look almost like fire crackers, but in reality are a series of countless detonations.

As the camera pans out, more bursts of munitions are seen erupting over the plant, raining flaming explosives down from above.

The attack is unrelenting, with hundreds of the sparks landing on the roofs and grounds of the steel works and setting them alight.

‘The Russian military themselves claim that 9M22S incendiary shells with thermite layers were used,’ said the Ukrainians.

‘The combustion temperature is about 2,000 to 2,500 degrees Celsius. It is almost impossible to stop the burning,’ Petr Andryushchenko, an adviser to the mayor of Mariupol, said on Sunday.

The video was released as the wives and mothers of Ukrainian defenders still inside the steel plant told Sky News that they feared the fighting was coming to an end.

Natalya Zarytska, who married her husband Bohdan in an online ceremony in April, told the broadcaster that he is ‘in real hell’.

‘He has lost more than 20 kilos in weight. He looks very bad and is in a terrible condition,’ she said, adding: ‘I think that this is the end.’

Pictured: A view of Russia army shelling to storm the territory of the besieged Azovstal plant in Southern Ukrainian port city of Mariupol on May 14, 2022

She showed the last photo that he had sent her, saying that his face was yellow. Ms Zarytska said her husband told her the defensive perimeter around the steep factory was getting ‘thinner’. ‘The end will be soon,’ she said.

On whether she would see her husband again, she told Sky News: ‘Yes I hope so. In my mind I think there is no chance but in my heart I feel that we can save them.’

A woman, who told the broadcaster her name was Svetlana, said she was certain she would see her son again, despite the odds of the fighters in Azovstal surviving looking increasingly desperate.

‘Of course. I have to see him. He is my son and he needs to come back. He knows I am waiting for him. Of course, no doubt. I have no doubts,’ she said.

The Azov Sea port of Mariupol is now largely in Russian control, except for the few hundred troops left in the steel factory.

A convoy of between 500 and 1,000 cars carrying civilians out of the city was reportedly able to reach the Ukrainian-held city of Zaporizhzhia on Saturday, while Ukrainian Deputy Prime Minister Iryna Vereshchuk said authorities were negotiating the evacuation of 60 severely wounded troops at the steelworks.

Fresh off his country’s Eurovision song contest victory, a defiant Ukrainian President Volodymyr Zelensky vowed early Sunday to one day host the song contest in the embattled city of Mariupol.

Ukraine’s Kalush Orchestra won the popular contest with its song ‘Stefania,’ which has become a popular anthem among Ukrainians during the war, and its victory was a morale booster.

‘Our courage impresses the world, our music conquers Europe,’ Zelensky said on Facebook. ‘Next year, Ukraine will host Eurovision!’

The band made an impassioned plea during the show to help the fighters in the steel plant, and Zelensky said ‘one day’ the contest would be held ‘in a Ukrainian Mariupol.’

This satellite image released by Maxar Technologies shows the eastern end of the Azovstal steel plant and the aftermath of continued aerial and artillery attacks on the compound in eastern Mariupol, Ukraine, May 12, 2022

The president’s optimistic words come as Russian troops are retreating from Kharkiv, the country’s second-largest city, after bombarding it for weeks, and Moscow’s forces continue to engaged in a grinding battle for the country’s eastern industrial heartland, the Donbas.

Russia has now likely lost one-third of the ground combat forces it committed in February and continues to suffer ‘consistently high levels of attrition’ while failing to achieve any substantial territorial gains over the past month, Britain’s Defence Ministry said in its daily intelligence update Sunday.

‘Russia’s Donbas offensive has lost momentum and fallen significantly behind schedule,’ the ministry said on Twitter, adding that the forces are suffering ‘continued low morale and reduced combat effectiveness.’

‘Under the current conditions, Russia is unlikely to dramatically accelerate its rate of advance over the next 30 days,’ the ministry said.

‘The object is completely destroyed,’ Kozitsky said in a post on the Telegram messaging app.

Earlier, a regional air command of Ukraine said several missiles had been fired at the Lviv region from the Black Sea in the early hours of Sunday morning.

Russia has been targeting rail facilities and other critical infrastructure in and around Lviv, which is near the Polish border and has been a major gateway for NATO-supplied weapons.

Western officials have said despite the attacks there has been no appreciable impact on Ukraine’s ability to resupply its forces.

Kalush Orchestra from Ukraine stand on the stage after winning the Grand Final of the Eurovision Song Contest at Palaolimpico arena, in Turin. Fresh off his country’s Eurovision song contest victory, a defiant Ukrainian President Volodymyr Zelensky vowed early Sunday to one day host the song contest in the embattled city of Mariupol

Pictured: A Ukrainian Army soldier walks past a burning natural gas terminal on May 13, 2022 on the northern outskirts of Kharkiv, Ukraine. Russian forces are giving up on Ukraine’s second city of Kharkiv and retreating after spending weeks bombarding it

Pictured: Ukrainian units patrol the surroundings of Kharkiv in the wake of the Russian retreat. Ukraine’s general staff said the Russians were pulling back from the northeastern city and focusing on guarding supply routes, as Kyiv and Moscow’s forces engaged in a grinding battle for the country’s eastern industrial heartland

Pictured: A damaged Russian tank turret blown clean off the chassis near the village of Mala Rohan, Kharkiv, Ukraine, 13 May 2022

With Russian forces now pulling back from the north-eastern city of Kharkiv, Ukraine’s military has said Moscow is now focusing on guarding supply routes, while launching mortar, artillery and airstrikes in the eastern region of Donetsk in an attempt to deplete Ukrainian forces and destroy fortifications.

Russian forces control a horseshoe-shaped swath of territory in the Ukrainian areas of Donetsk and Luhansk, which make up the Donbas region, the border area where Ukraine has battled Moscow-backed separatists since 2014.

After failing to capture Kyiv following the Feb. 24 invasion, Russian President Vladimir Putin has shifted his focus eastward to the Donbas, aiming to encircle Ukraine’s most experienced and best-equipped troops, and to seize territory still under Ukraine’s control.

Airstrikes and artillery barrages make it extremely dangerous for journalists to move around in the east, hindering efforts to get a full picture of the fighting. But it appears to be a back-and-forth slog without major breakthroughs on either side.

Russia has captured some Donbas villages and towns, including Rubizhne, which had a prewar population of around 55,000.

Zelensky said Ukraine’s forces have also made progress in the east, retaking six towns or villages in the past day.

In his nightly address Saturday, he said ‘the situation in Donbas remains very difficult’ and Russian troops were ‘still trying to come out at least somewhat victorious.’

‘Step by step, we are forcing the occupants to leave the Ukrainian land,’ he said.

Kharkiv, which is near the Russian border and only 50 miles southwest of the Russian city of Belgorod, has undergone weeks of intense shelling. The largely Russian-speaking city with a prewar population of 1.4 million was a key military objective earlier in the war, when Moscow hoped to capture and hold major cities.

Ukrainian refugees from Mariupol region arrive by cars at a registration and humanitarian aid centre for internally displaced people, amid Russia’s ongoing invasion of Ukraine, in Zaporizhzhia, Ukraine May 14

Regional Gov. Oleh Sinegubov said via the Telegram messaging app that there had been no shelling attacks on Kharkiv in the past day.

He added that Ukraine launched a counteroffensive near Izyum, a city 78 miles south of Kharkiv that has been held by Russia since at least the beginning of April.

Putin has justified the war in Ukraine by claiming it was a response to NATO’s expansion in Eastern Europe.

But the invasion has other countries along Russia’s flank worried they could be next, and in the past week the president and prime minister of Finland said they favour seeking NATO membership. Officials in Sweden are expected to announce a decision Sunday on whether to apply to join the Western military alliance.

In a phone call Saturday, Putin told Finnish President Sauli Niinisto that there are no threats to Finland’s security and joining NATO would be an ‘error’ and ‘negatively affect Russian-Finnish relations.’

The Nordic nations’ potential bids were thrown into question Friday when Turkish President Recep Tayyip Erdogan said his country is ‘not of a favourable opinion.’

U.S. Secretary of State Antony Blinken was scheduled to meet his NATO counterparts, including Turkey’s foreign minister, this weekend in Germany.

NATO member Turkey has proposed carrying out a sea evacuation of wounded fighters holed up in a steel works in the southern Ukrainian city of Mariupol, President Tayyip Erdogan’s spokesman said on Saturday.

Ibrahim Kalin told Reuters in an interview that he had personally discussed the proposal with Ukrainian President Volodymyr Zelenskiy in Kyiv two weeks ago and that it remains ‘on the table’ although Moscow has not agreed to it.

Under the plan, people evacuated from the vast Azovstal steel plant would be taken by land to the port of Berdyansk, which like Mariupol is on the Sea of Azov, and a Turkish vessel would take them across the Black Sea to Istanbul, he said.

‘If it can be done that way, we are happy to do it. We are ready. In fact our ship is ready to go and bring the injured soldiers and other civilians to Turkey,’ said Kalin, who is also Erdogan’s top foreign policy adviser. Ukraine and Russia did not immediately comment on the possibility of an evacuation by sea.