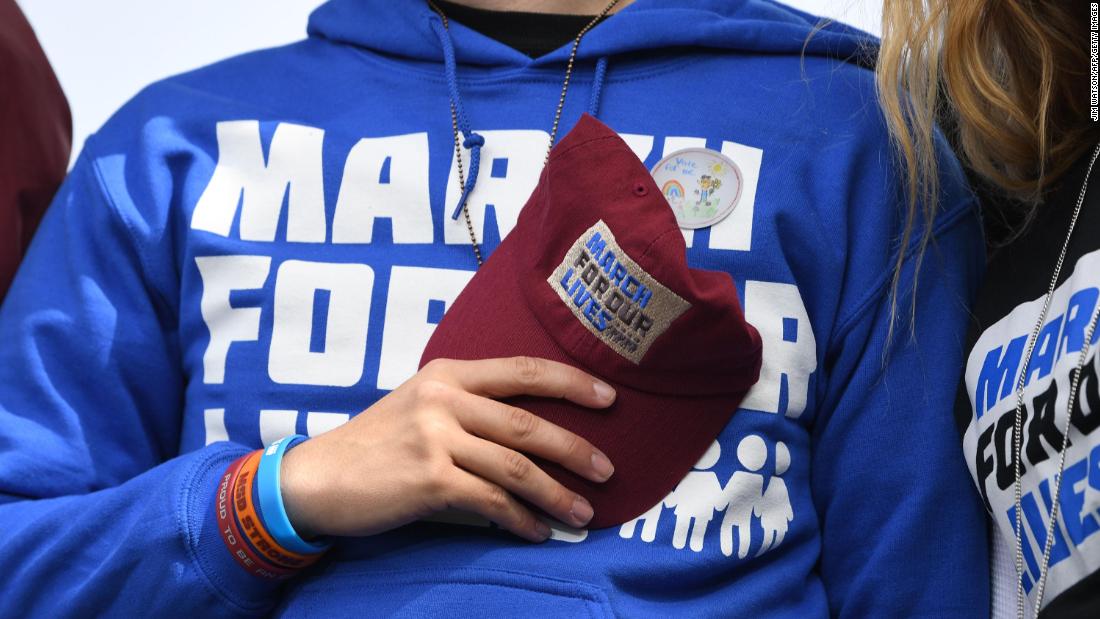 The DC march on Saturday afternoon at the Washington Monument featured a slate of speakers pushing for gun control — and calling on lawmakers and federal leaders to take action.

“If you listen closely, you will hear the cries of our fallen loved ones, in our churches, our synagogues, our schools and now our grocery stores,” Raymond Whitfield said at the DC rally. Whitfield’s mother, 86-year-old Ruth Whitfield, was killed in the Buffalo supermarket massacre last month. “Lower your weapons, and let us replace the hate,” Whitfield added.

“The injustices we see on the daily are being blatantly ignored by those on Capitol Hill. The cries of the nation’s children can be heard across the world, and you choose to turn a blind eye and a deaf ear to the lives being taken,” March for our Lives board member Trevon Bosley said during the rally.

“Your job is to represent and serve all the people who call this country home, and so far you’ve shown us you only represent the pockets of whoever donates the most to your campaign,” Bosley added.

Rallies underway across the US

Rallies were also scheduled in more than 400 US cities in nearly all 50 US states Saturday.

“After countless mass shootings and instances of gun violence in our communities, it’s time to take back to the streets and march for our lives,” the organization’s website states. “We marched in 2018 after the shooting at Marjory Stoneman Douglas in Parkland, Florida, and now we’re headed back to DC.”
In Saturday’s rally, Parkland shooting survivor David Hogg highlighted common ground among Americans who want to help curb the violence, saying, “America is not as divided as Congress.”

“The most divided people in this country are not in the 50 red, blue and purple states across the country, they are right here. They are the 100 senators on Capitol Hill,” Hogg said. “Because we do have Republicans with us. We do have gun owners with us. We all want change. Either they unite behind the changes we’re demanding or we will vote them out because all of us do agree, left and right, gun owners and non-gun owners, that we must take action to save lives now.”

Seventeen people were killed in the Parkland school shooting in 2018.

This weekend’s marches come alongside a renewed push in Congress for gun control. Lawmakers have been facing intense pressure to act in the wake of the recent mass shootings, and at least 10 Republicans need to vote with Democrats in order to clear the 60-vote threshold to break a filibuster and pass legislation.

Despite widespread GOP opposition, Sen. Chris Murphy of Connecticut, the lead Democrat in the bipartisan negotiations, told CNN he believes there will be more than 10 Republicans supporting gun safety measures in the Senate.

“I think we will put together a package that will get more than 10 Republican votes,” he told CNN’s John Berman on “New Day” on Thursday.

March for Our Lives last held a rally in DC in 2018 following the deadly shooting rampage in Parkland. Survivors of the shooting delivered a resounding message that Washington’s inaction on the scourge of gun violence is no longer acceptable.

“To the leaders, skeptics and cynics who told us to sit down, stay silent and wait your turn, welcome to the revolution,” then-Marjory Stoneman Douglas student Cameron Kasky told the crowd in Washington at the time.

“Either represent the people or get out. Stand for us or beware.”

Both universities announced their intentions to swap conferences in separate statements on Thursday. The Pac-12…